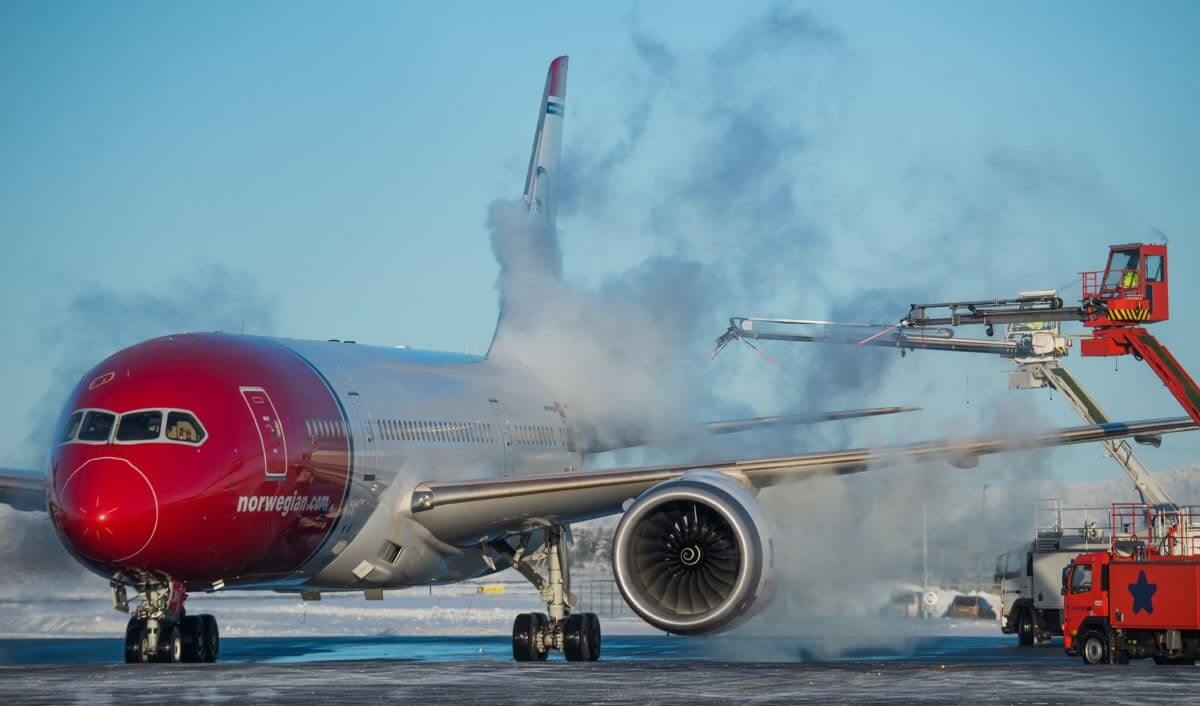 As the winter season creeps ever closer in the northern hemisphere, many airports begin their preparations for the de-icing season.

As an almost secret science to the general public, the de-icing process raises many questions.

Aviator, a leading Scandinavian aviation ground handling company with many years of experience in the field of aircraft de-icing, will try to answer these and other questions.

Is de-icing fluid a safe and eco-friendly solution?

The answer to this question can be both yes and no, varying from situation to situation. In essence, de-icing fluid is comprised of only two elements; water, and food-grade glycol. Due to the natural properties of glycol, when mixed with water it is possible to decrease the freezing point of water and act as an anti-icing agent.

While it is not poisonous to the environment directly, the chemical compound is dependent on oxygen (O2) to decompose, making it harmful to aquatic ecosystems if disposed of incorrectly. Aviator representatives have said that this characteristic is well-known within the industry and in response, the company uses special equipment to remove the excess liquid and prevent any environmental harm.

“After every de-icing or anti-icing procedure, we have dedicated trucks equipped with the necessary machinery to collect the excess liquid that has dripped from the aircraft. The solution is then safely utilised to avoid any environmental impact and cause irreparable damage to ecosystems.” – said Richard Lundgren, the Head of De-Icing Division at Aviator Airport Alliance AB.

The title of this section may not sound very enticing for party-lovers, but it’s a fact. A simple recipe to make so-called ‘fog juice’ requires only 2 ingredients: glycol and distilled water. Sound familiar? Well, it should, because the same recipe applies to the de-icing fluid used on aircraft. While it is not a well-known fact for everyone, it is a fun one to know and tell your friends next time you’re in a nightclub or at a concert.

The fog fluids made according to this recipe is non-toxic or carcinogenic, meaning, neither a foggy nightclub nor aircraft de-icing will have negative impacts on a person’s health.

Why can you smell maple syrup during aircraft de-icing?

Many people recall feeling an aromatic smell closely resembling maple syrup during aircraft de-icing. While some might suspect that the smell emanates from a spill of maple syrup at the back of an aircraft, the reality is different.

Before the commencement of the aircraft’s de-icing procedures, ground handling personnel and the aircraft’s flight crew communicate and perform necessary checklist procedures. One of the items on the flight crew’s checklist requires that the air conditioning system be turned off to prevent clogging.

Although the air conditioning has been turned off, some fumes can enter the cabin (we remind you they are not toxic or carcinogenic) which not only makes an impressive visual spectacle, like a nightclub fog machine but also exudes a sweet maple syrup scent.

“A physical description of glycol says it is an odourless, colourless, sweet-tasting, viscous liquid. This chemical compound is widely used in the food industry, in soft drinks, popcorn, fast foods and even bread. It is favoured by many companies due to its ability to hold moisture and has a pleasantly sweet odour, making the food look and smell more delicious. This is why during de-icing when glycol and water mixture drops enter the AC system and begin to evaporate, passengers may experience a sweet smell and see some vapour coming from the vents,” – says Aviator Airport Alliance AB representative, Richard Lundgren.

Why, if the captain says ‘no go’ to de-icing, there will be no de-icing process?

Every airline has a specific set of rules and regulations that run in tandem with those set by aviation’s governing bodies. If an airline is looking to minimise costs, the de-icing process may be skipped, if it is considered not to have a direct impact on the aircraft’s performance. While this is a possible scenario it is rare in practice. Almost all airlines tend to allow de-icing and anti-icing procedures if recommended to do so by qualified ground handling personnel.

“In a hypothetical scenario where the captain does not agree to perform de-icing during precipitation and low outside air temperature, ground handling teams can only provide recommendations to the captain. If a captain refuses the offer to de-ice two times, the pilot-in-command becomes responsible for any technical faults or emergencies caused by the ice or snow build-up on the wings. In case of an accident the information would be easily found in the black-box as the conversations between pilots and ground handling personnel are carried out on intercom channels which are always recorded,” Richard Lundgren.

Klagenfurt airport renews: all machines and vehicles in an online auction