Although demand for sustainable aviation fuel (SAF) is expected to experience significant growth, production is currently limited with only a handful of commercial plants available today.

bp believes that producing SAF through co-processing at existing refineries will help the aviation sector as it transitions to a low-carbon industry and builds dedicated and more efficient standalone units for SAF production.

Today, existing refineries can be used to co-process 5% approved renewable feedstocks alongside the crude oil streams to meet the requirements of the industry jet fuel standard ASTM D1655.

bp’s Lingen refinery in Germany is already being used to produce SAF through co-processing.

This is then blended with up to 50% conventional jet fuel and certified as ASTM D1655. Encouragingly, ASTM is also supporting the development of specifications for 100% SAF.

The advantage of co-processing is that it doesn’t require the significant financial investment and time that comes with building a new standalone facility.

Relatively minor modifications are required to enable the production of SAF through co-processing while standalone plants get up and running.

Also, these facilities potentially have greater flexibility in feedstocks for the coming years of energy transition, being able to switch between co-processing and the traditional processing of crude oil, to meet fluctuations in demand.

There are currently around 600 refineries in the world. That’s a huge manufacturing resource in terms of the opportunity to help production today.

Given the bulk of our refinery experience to date has been based around processing crude oil, we are continually using this expertise as the foundation for building our knowledge and understanding around co-processing renewable feedstocks.

Over the last decade we have gained greater understanding of how these feedstocks are different to crude oil, as well as how this might impact our facilities and kit. This has placed us in a strong position to produce SAF through co-processing in the most efficient and economical way.

If successful, this approval would benefit the whole industry. It’s about finding a universal route to help the industry transition to a low-carbon future. Ultimately, the aim would be to explore co-processing of up to 100% renewable feedstocks as reliance on crude oil diminishes in the future.

When it comes to transporting feedstocks to refineries, this is typically done by rail, truck, or barge.

For example, our refinery in Lingen can receive shipments by barge which enables feedstocks to be transported in bulk offering more competitive freight costs and in most cases lower carbon emissions compared to trucks.

Once produced the optimum method for transporting SAF is via pipeline.

This is a highly efficient, convenient, and safe way of supplying fuel to airports. Generally, aviation fuel in the US is supplied to airports using a network of pipelines4 and in Europe many existing refineries are well connected to efficient logistics solutions such as pipelines or rail.

Standalone plants (depending on where they are located and the supply routes for such plants) might not be so well connected. Care will be required to optimise this aspect, balancing sustainable feedstock source and distance to the aviation market.

One of the advantages with a standalone plant is that it produces 100% renewable SAF, which can be transported neat before being blended with conventional jet fuel.

SAF produced through co-processing on the other hand, only contains up to 5% renewable feedstocks.

This highlights the importance of solutions such as mass balancing and book and claim systems that give customers greater access to the low carbon benefits of SAF produced through co-processing the latter enables customers to access the benefits of SAF without being physically connected to the supply site, and high volumes of conventional jet fuel (blended with SAF) don’t have to be transported in inefficient ways.

Success of the proposed 30% co-processing approval would clearly benefit all.

Another challenge fuel suppliers face is that to qualify for tax credits and other financial incentives some jurisdictions require measurement of the renewable carbon content in aviation fuel, using third-party verification through C-14 testing. This tests for carbon from recently living sources such as plants and animals.

However, with the range of renewable feedstocks continually evolving C-14 is not an effective test method for all possibilities, for example municipal solid waste.

Given SAF from standalone plants is produced from 100% renewable feedstocks the requirement for C-14 isn’t necessary and we anticipate this resource-intensive test method will eventually be removed for standalone produced SAF.

We believe that feedstock traceability and lifecycle reduction measures are a more efficient and cost-effective way of measuring and accounting for the carbon footprint of SAF produced through co-processing too, and as such, we would like to see C-14 testing replaced by these in all circumstances. 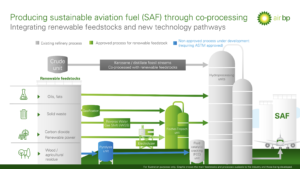 As the aviation sector continues to explore opportunities to scale up the production of SAF in the most economical and efficient way, bp considers that co-processing has an integral role to play.

However, we also believe that co-processing on its own won’t be enough to meet increasing SAF demand.

Standalone units will also be required to ramp up production. Building on its refinery footprint in the near-term future, bp anticipates investing in five major biofuels projects, including three adjacent to existing refineries and the conversion of up to two bio-refineries.

It’s only by combining the expertise and resources found in existing refineries with new processes and standalone plants that the industry will be able to ensure SAF is supplied at scale, not just in the short term, but up to and beyond 2050.