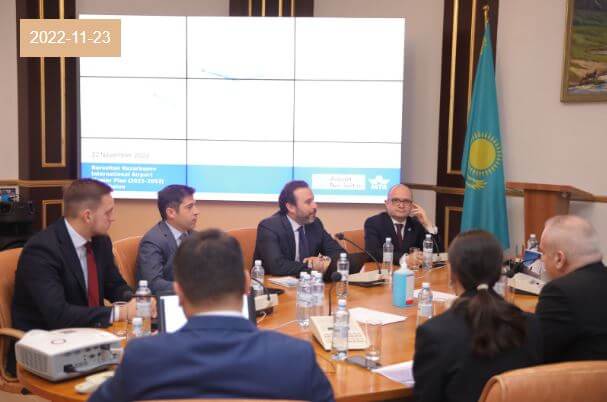 The development plan of the capital airport until 2050 was presented

The concept of the project to develop the master plan for airport development until 2050 was presented at Nursultan Nazarbayev International Airport.

“The master plan includes the phase-by-step planning of land use, construction, parameters and technological schemes of new infrastructure objects, in particular, the second runway, apron, terminals, hangars, boxes, as well as special equipment and personnel. Based on this plan, a long-term business plan for the development of the company will be developed in the future, “ Daulet Khamzin said in his speech.

Alejandro Rivera Gil, project manager of the International Air Transport Association, IATA, said that the project has been developed for more than seven months and what factors were taken into account when developing the document.

“We started this project seven months ago. One of the important directions is interaction with all state bodies of Kazakhstan during project development. Extensive and comprehensive work was done. In addition, master plan drawings are also presented. When developing the document, we considered several factors. This is the infrastructure, parking spaces, creating comfortable conditions for passengers and the proximity of the airport to the city.” said Alejandro Rivera Gil.

We remind you that the implementation of the master plan will be the driver of attracting private investments in the airport infrastructure. In particular, the developed development concept allows for the creation of an airport city that includes a special economic zone, a multimodal cargo transportation center, an E-commerce service center, an aircraft maintenance center, and an aircrew training center.