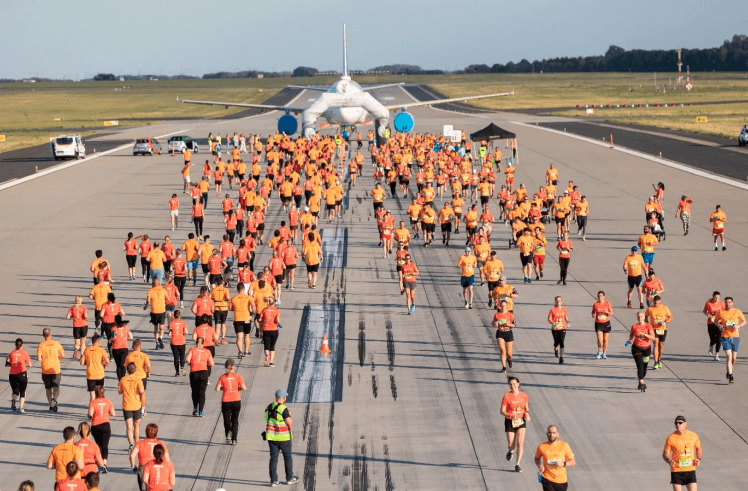 For the first time, the “Sunset Run” moved from its traditional hot midday sun slot to a cooler, albeit still very balmy, 17.30 early evening mass start.

Proceeds from race entries and sponsorships – this year’s main sponsors being Airbus, Lufthansa Systems, Lufthansa Technik, and Turkish Cargo – are shared by two charities – Hungary’s “Suhanj!”, which promotes inclusion in sport for people with disabilities, and the Anthony Nolan foundation which enables bone marrow transplants and other treatments for suffers of blood cancer.

The race also serves to be a major community event for Budapest Airport but, as in previous years, it was the international aviation community which swept the podium for the top places this year.

Winner of the individual 10k race prize was Wizz Air’s Oleksandr Petrus, Aviation Security Manager, Group Security and Resilience with an incredible 36:20 time; while the fastest 10k woman was KPMG’s Anna Votin (42:04). Both received a flight voucher for two from Turkish Cargo, to anywhere on the Turkish Airlines system.

The event also supports a 5km race with many serious competitors over this distance, evidenced by the performance of the winners with Budapest Airport’s own Balázs Csuka triumphing in the men’s 5k with 17:42, and by Gabriella Gelencsér, an API Integration Support Specialist with Lufthansa Systems, being the fastest woman with a 20:45 finishing time. 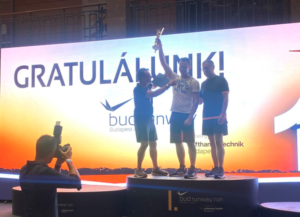 However, the Fastest Airline team prize is always the most coveted trophy and, for the first time, this year this went to Czech Airlines, closely followed by previous two-times champions Aer Lingus.

“We were very pleased to have the Czech Airlines team participating in this charity event and more than happy to have them winning – congratulations to Czech Airlines!” said Rozenblum at the prize-giving.

For the very first time in the 10-year history of the series, the Fastest Airport Team was Budapest Airport.

As a part of the BUD team, in which he ran his own 10k in a respectable 57.09 finishing time, the Budapest Airport CEO, Chris Dinsdale, said: “While I accept this prize on behalf of all the Budapest Airport runners today, in this 10th year this trophy truly goes to the whole team of Budapest Airport employees and shareholders who always put in such a supreme effort, much of it in their own time, in order to deliver what has consistently developed over a decade into the world’s best aviation-sporting-charity event.”