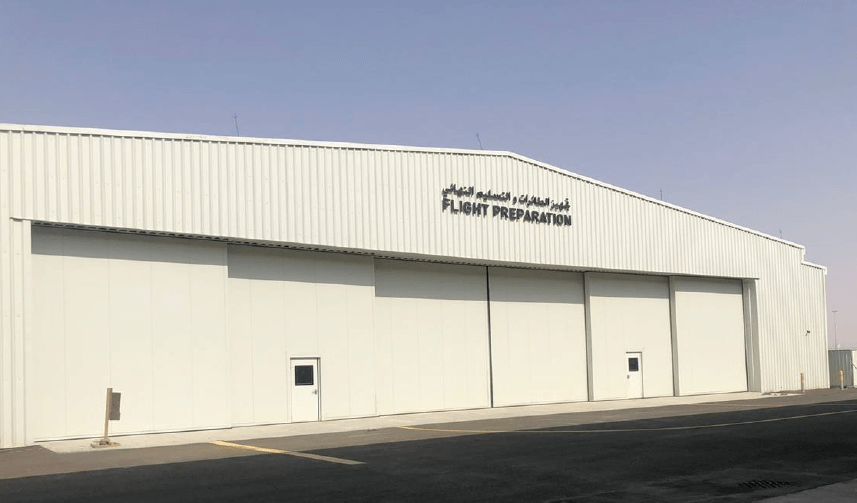 Calidus LLC is a Technology Development and Manufacturing Company, founded in 2015 and based in Al Matar, Abu Dhabi.

In November 2019 at the Dubai Air Show, the United Arab Emirates armed forces placed an order with Calidus for 24 B-250 light attack aircraft. The contract, worth approximately USD 620 million, represented the first time the UAE military had purchased a domestically-produced aircraft.

Calidus LLC commissioned ‘Civil Power General Contracting LLC’ to build a Flight Preparation and a Flight Assembly facility at Al Ain International Airport to facilitate the full-scale production of the B-250.
Jewers Doors worked closely with the Consulting Engineering firm ‘Stanley Consultants’ during the pre-tender stage and assisted with the design and specification of the hangar doors. This in turn led to them being awarded the contract to manufacture and install 2 sets of their Esavian Type 126 Sliding aircraft hangar doors. 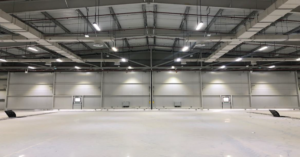 Both sets of doors are 30 metres wide by 5.6 metres high, electrically operated and fully clad with insulated flat sandwich panel cladding. Each set of doors are configured in six sheaved door leaves which travel on three bottom tracks with three leaves sliding into parking areas clear of the opening on each side of the hangars. There are 2 personnel doors in each set to allow access into the hangar when the main doors are closed. Each master leaf is fitted internally with an audible alarm which operates at all times when the ‘open’ and ‘close’ buttons are pressed, ensuring that all personnel inside the hangar facility are aware of the door’s movement.

Ben Pritchard, Regional Sales Manager based in our Dubai Branch, said: “We already have several projects in the UAE confirmed for 2020, including at Fujairah International Airport, Dubai South and Al Dhafra Airbase in Abu Dhabi. Jewers Doors also continues to operate worldwide from our headquarters and manufacturing base in the United Kingdom.”