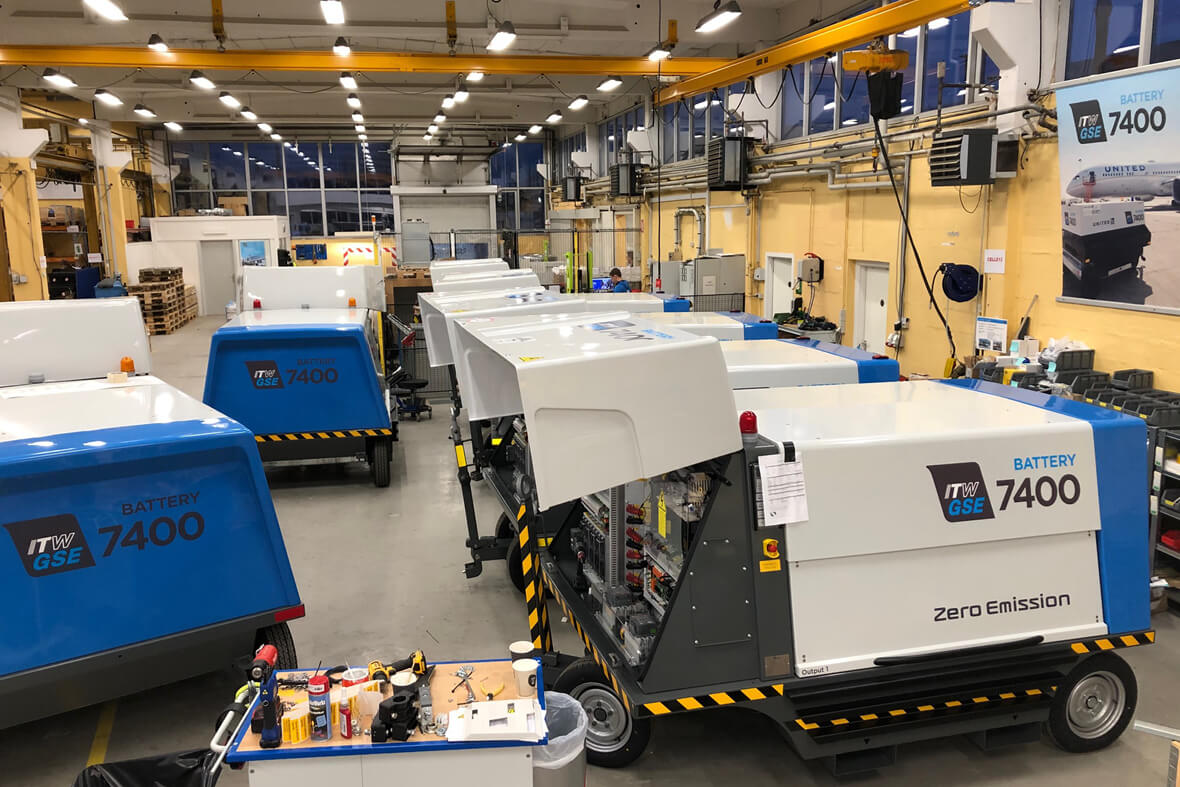 In a change that was effective as of 1 September, Poul Elvstrøm has become the new vice president/general manager at ground power unit and pre-conditioned air unit supplier ITW GSE

Elvstrøm has been with ITW GSE for nearly 25 years, having joined the business in 1998, and will likely already be well-known to Airside readers from his achievements in his previous role as vice president global sales & marketing for ITW GSE.
In that role, Odense, Denmark-based Elvstrøm helped bring together into one division the various businesses of previously separate GSE suppliers Hobart, AXA Power, Trilectron, J&B Aviation and Houchin.
He has replaced Henrik Olsson, who decided to step down as vice president/general manager (VP/GM) but will retain a reduced set of responsibilities with ITW.
David Feuga, who had been based in ITW GSE’s Dubai branch office, became global sales director on 1 September, and he has taken over Elvstrøm’s responsibility for global sales and marketing. (ITW GSE has two manufacturing facilities: in Palmetto, Florida, in the US, and at Odense in Denmark. It also has branch offices in Dubai and Singapore, and is supported by more than 100 distributors around the world.)

Looking ahead
His promotion did not come as a surprise, Elvstrøm tells Airside. His move to the position of VP/GM had been planned for some time, with the requisite preparations being made both by himself and Olsson. The question as to ‘when’ had not been exactly determined, but Elvstrøm had worked towards this promotion for some years with the ITW corporate leadership team, he says.
In his new role, Elvstrøm is accountable for all matters – operational, financial (full profit and loss responsibility), human resources and so on – across all of ITW GSE. He reports to the executive vice president, speciality products, at ITW’s headquarters in Glenview, Illinois, in the US. ITW GSE’s parent company, Illinois Tool Works (ITW) is a US$14.5 billion multinational business. It manufactures a wide range of advanced industrial technology and has 82 business divisions and operations across 52 countries, employing approximately 45,000 people.
Elvstrøm is looking to the future, but he is also fully cognisant of the fact that the aviation industry remains in “an unprecedented situation”. While the sector has suffered other shocks and huge downturns in fairly recent times in the form of such crises as 9/11, SARS and financial crashes, the impact of the Covid pandemic has differed both in severity and in duration, and its effects are still being felt.
“We can be very happy that passenger numbers are rising quickly and, on some domestic routes in the US, passenger load factors are even above what they were pre-pandemic,” Elvstrøm says. The US market has picked up especially well but, “As a global player, we can certainly see that not all aviation markets have recovered.” In particular, he points to the usually huge number of passengers flying into and out of China – where, today, international travel remains severely curtailed.
Another problem that the industry is facing right now, and one that also has an impact on demand for GSE such as GPUs and PCA equipment, is that the recovery in demand for flying capacity seems to have caught some carriers on the hop. Notably, many airlines now find themselves short of staff to operate the aircraft they have at the desired increased operational intensity.
Some ground service providers (GSPs) are facing the same problem, but they typically require less time to train new staff members, Elvstrøm observes, so they perhaps face less of a long-term issue in this regard.
So, while there is certainly plenty of cause for optimism for the industry’s ongoing recovery, Elvstrøm’s first priority will still be to see ITW GSE through what is left of the hard times caused by the pandemic, with its unwanted effects on the aviation sector and consequent impact on demand for GSE.

The transition to electric
Another major priority will be to meet the increasing demand for both mobile and greener GPUs, Elvstrøm confirms. ITW GSE is very well set to do just that, he advises.
For example, it already leads the market in offering a comprehensive range of battery-powered GPUs, Elvstrøm notes. Right from its 28V DC eGPU available for small propeller-driven aircraft and helicopters up to its 90kVA for narrowbodies and 180kVA for widebodied aircraft, there is a battery-powered ITW GSE GPU for all applications, he says.
And demand for such units is certainly ratcheting up, he observes. In May of this year, ITW GSE celebrated moving its 100th battery-powered 400Hz, 90kVA eGPU off its Odense production line. Those 100 units had been sold in the few years since 2018; yet by as early as January next year, Elvstrøm believes that the company might have shipped 200 of them. Demand for battery-powered GPUs is growing fast – “there is real acceptance in the market now” for such green power units, he stresses.
The biggest sticking point holding back eGPU sales has simply been the same thing that has held back conventional diesel sales – the impact of the pandemic on the aviation industry and on the budgets of purchasers of GSE such as GPUs. But, as we have already seen, that picture is becoming much rosier. American and European airlines in particular are today investing heavily in new equipment such as GPUs, Elvstrøm says.
One way round a temporary shortage of funds – and while American airlines, amongst others for example, are today investing in GSE, they like most other carriers are short of available capital – is to lease rather than buy. As a consequence, perhaps, ITW GSE has seen a significant rise in acquisitions of its GPUs through leasing specialists such as TCR and HiSERV. Power-by-the-hour is another option for those operators looking to rein in their costs as much as possible in the short term. In fact, Elvstrøm estimates that approximately 45% of deliveries of its mobile eGPUs are now being acquired on lease or on power-by-the-hour terms.
Of course, there are limits to the speed at which the transition to electric will take place. In particular, a large proportion of airports do not yet have the relevant charging infrastructure in place. “The battery-powered technology is here, the [GPU] equipment is available, but there is still a real need for sufficient airport charging infrastructure,” Elvstrøm insists.
“Airport operators play a significant role in making this transition [to electric] process possible. So we need more communications between airlines, handlers and airport operators on this issue.”
Another sticking point is obvious: GSE operators will generally only replace old diesel models with new battery-powered equipment when the time has come to phase out the old. Thus, the period of transition will necessarily be a prolonged one. Notwithstanding, Elvstrøm is expecting that between 20 and 25% of global demand for GPUs next year will be for the battery-powered kind.
There are also positive drivers to the process. Adding to the general pressure on operators to move to more environmentally friendly operations, there are sometimes financial incentives to do so. Some US states, for example, offer funding for those companies investing in greener equipment – California’s Clean Off-Road Equipment Voucher Incentive Project (CORE), is one such – and Elvstrøm points to more and more of these sorts of incentives being put in place. Indeed, he confirms that many of ITW GSE’s recent eGPU sales to US customers have been specifically assisted by such incentives.

Delivery
Elvstrøm expects to build on the strength and success of ITW GSE’s past history and he believes the company to be exceptionally well positioned for the future. In part, this is because – alongside the two ever-critical factors of price and capability – operators are now basing their selection of which GSE manufacturers to work with on the question, ‘Who can actually deliver?’
ITW can do that, thanks in part to having a strong and stable supply chain at a time when delivery lead times can otherwise be worryingly long, as well as to the fact that it offers products based on simple designs that share numerous common components. Thus, for instance, all ITW GSE’s GPUs share a common user interface and control board, cutting down on unnecessary complexities that might create bottlenecks in a supply chain and lessening the number of different parts that have to be supplied to produce any given GPU machine. This commonality also minimises training requirements for operators.
In fact, ITW GSE has historically operated on a ‘common platform’ concept, when new product designs are not created from scratch, but built around the common designs of their predecessors. “That is a strength for us that also helps in relation to sourcing parts and raw materials,” Elvstrøm points out.
The fact that ITW GSE did not release any of its staff during the pandemic also means that it still has the skilled human capital in place to ramp up production to meet growing demand.
They are going to be needed. In pre-pandemic times, ITW GSE hit a peak sales figure of 2,500 GPU and PCA units; next year, Elvstrøm expects that figure to be in the region of 2,300 – a highly creditable figure given that the China market remains in the doldrums and the Ukraine war has meant a collapse in the Russian market too.
The future, then, is bright, not least in terms of the transition that we are seeing towards battery-powered GSE. Elvstrøm believes ITW GSE to be at least a couple of years ahead of its peers in this regard and, always looking down the road, is already investigating the potential for options such as hydrogen fuel cell technology, as the business looks to build on past success and continue to grow year on year.