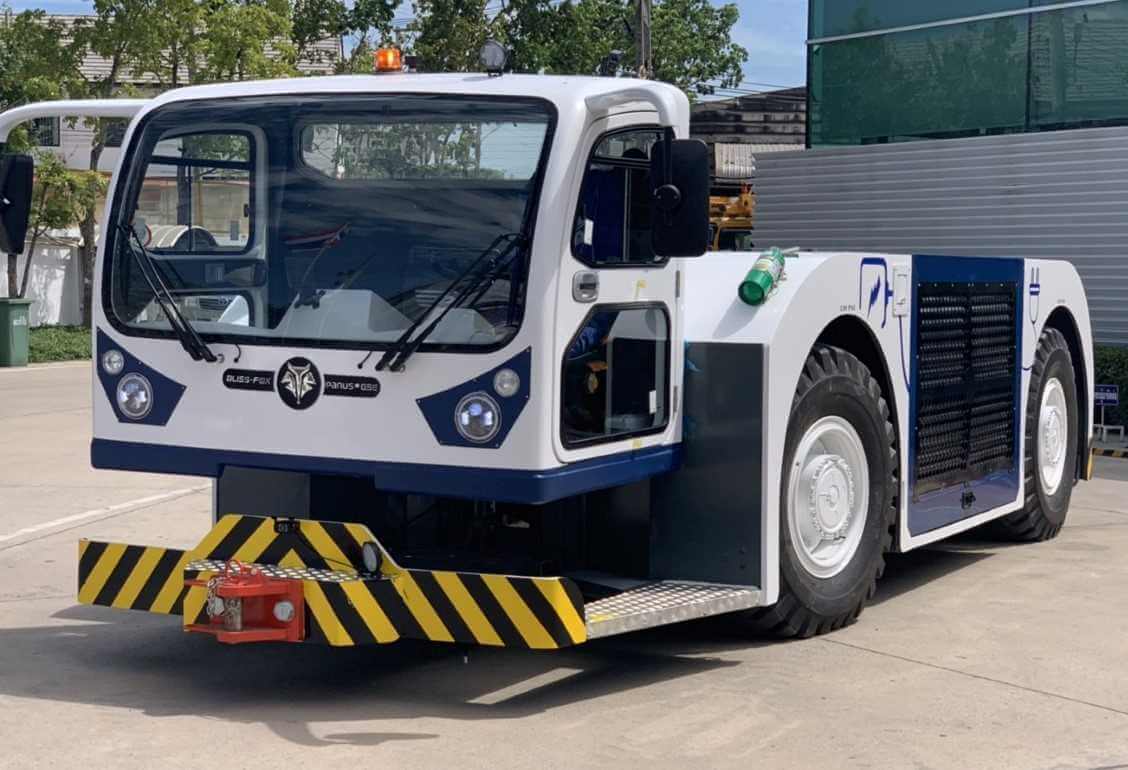 Panus, which owns the Bliss-Fox brand of GSE, is continuing its efforts to bring new electric aircraft tugs to market. Danfoss is supplying the electric drivetrain for the vehicles

Panus Bliss-Fox offers a range of motorised GSE such as aircraft tractors (including the F1-500, F1-400 and F1-300 series), cargo and baggage tractors, passenger step vehicles and airport buses, as well as non-motorised GSE including towable steps, baggage carts, and container and pallet dollies.

It is keen to develop environmentally friendly versions of its tow tractors, and has so far developed electric-powered versions of its F1-280 and F1-340 vehicles. An initial prototype is now undergoing testing at an airport in Thailand.

Danfoss specialises in high-performance power systems in the form of drivetrains for heavy-duty vehicles, machines and marine vessels. They are suitable for hybrid and electric applications within the power range of 30kW to 2,000kW.

The Danfoss Editron electric driveline system provides a maximum power output of 200kW for the tugs. Editron, says Danfoss, has been designed to offer the maximum possible efficiencies, while the software-based approach that controls each individual component of the electric drivetrain allows for “greater intelligent management of power distribution, [thereby] delivering superior operational performance”.

Danfoss does not supply battery packs for the vehicles (that is left to the customer), only the drivetrain (ie, the components that deliver power to the driving wheels).
Danfoss Editron’s business development manager for the Asia-Pacific region, David Hunter, believes that the current Covid-19 pandemic may offer an opportunity – amongst so many downsides – for the aviation industry to look at new greener technologies.

“Airlines, ground service operators and airports can do something positive during the current reduced demand for air travel by trialling new, innovative sustainable technology that can be introduced when demand increases again,” he considers.

“There is no better time to test new equipment and put electrification into practice: there are more free air slots, less congested pushback times and idle aircraft. Airports can come out of this downturn with reduced operating costs and much-improved emission reduction policies and targets.”

Hunter tells Airside that Panus approached Danfoss a couple of years ago for help on the electric tug project, but that the two companies were already longstanding partners, having collaborated on other projects for many years prior to that.

Danfoss was given the scope to assess the possibility of helping in the process of moving a wide range of Panus Bliss-Fox GSE over to electric variants, together with the operational parameters required of the aircraft tugs. So began the process that Hunter describes as ‘dimensioning’: analysing how Danfoss electric drivetrains could be fitted and operated within the bodies of the well-established tractor units manufactured by Panus.

According to Hunter, Danfoss motors and inverters are compact and ideally suited for application within the Panus Bliss-Fox tugs. While so far he and his colleagues have focused on the application of the Editron drivetrain in Panus’ larger tugs – the F1-340E 40-ton pushback is capable of towing aircraft of up to 380 tons, thus taking in aircraft up to B777 size – they can now turn their attention to smaller narrowbody pushbacks as well.
A wide range of benefits
Bernard Dubois, product and business development director at Panus Assembly, sees plenty of opportunity for greener equipment as part of a long-term trend in the aviation industry to move away from fossil fuels. “This machine is reflective of the way the ground service equipment industry is changing,” he observes.

“The automotive sector is moving to electric and the airport tractor segment is going the same way, with many airports and countries pushing for the introduction of green technology.

“This fully electric pushback tractor will boast a wide range of benefits for those that order it, including low operating costs and reduced maintenance needs. The fact that it is a Thai company blazing a trail with this machine rather than a European or American one is a first too,” Dubois adds.

Conburi Province, Thailand-based Panus manufactures a wide range of GSE, including tractors that can tow the largest of today’s passenger aircraft, the double-decker A380. It acquired the well-known Bliss-Fox brand in 2015.