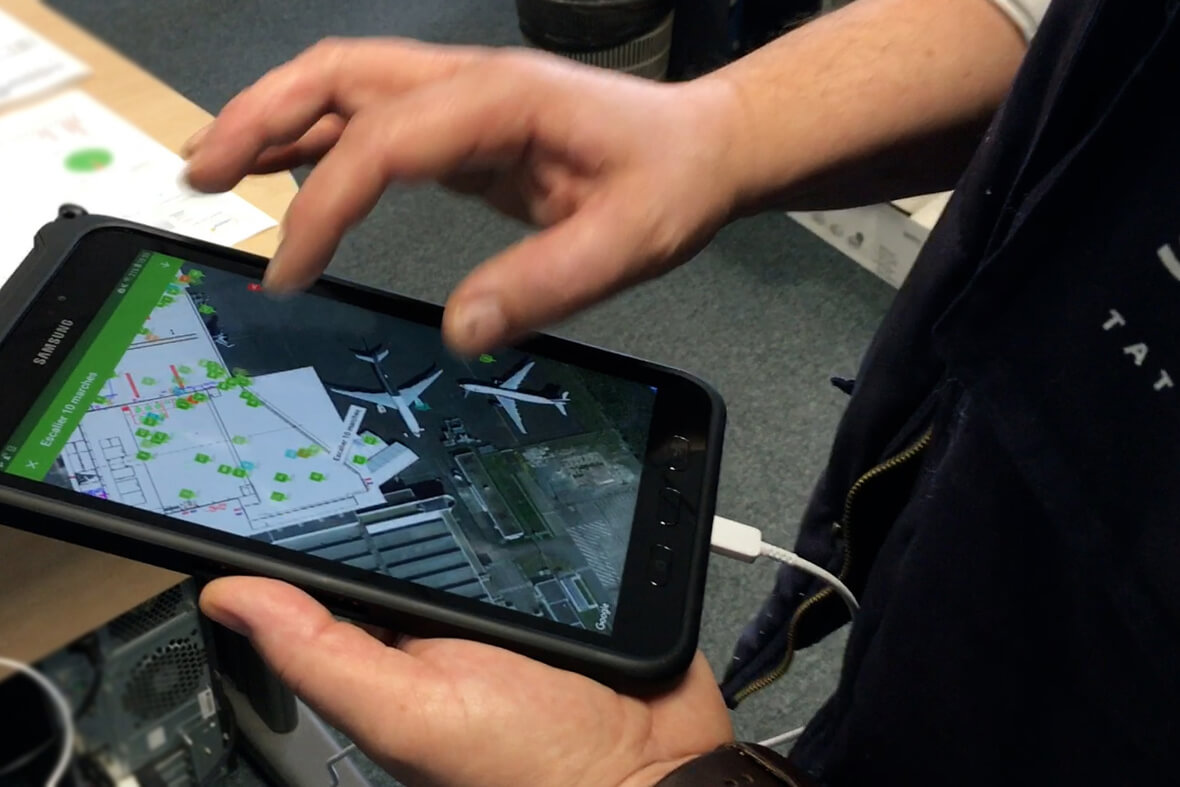 Based at Toulouse, France, ADVEEZ specialises in telematics systems that are designed with the particular needs of the airport ramp environment in mind (though it also sells into other markets, including ports, railways, industrial sites and maintenance, repair and overhaul businesses). The company name combines two concepts: Advanced and Easy

Formed in 2011, ADVEEZ has been supplying its telematics technologies into the aviation sector for more than 10 years. Its first customer was European ground service provider Aviapartner; today, its clients in the aviation space include Airbus (also based in Toulouse and which uses ADVEEZ systems to track equipment used on and around its assembly lines), European airlines such as British Airways (part of Anglo-Spanish group IAG), US carriers Delta Air Lines and United Airlines, plus airports including Brussels Airport, local gateway Toulouse-Blagnac Airport and Aéroport de Lyon-Saint Exupéry. ADVEEZ also partners with GSE manufacturers JBT and Airmarrel.
Its primary markets have traditionally been Europe and the US, advises Matthias Moulinier, ADVEEZ product and customer integration director, who is responsible for both product development and solution delivery for the company. Now, though, business is expanding into the Middle East and elsewhere in Asia.
Moulinier and some of his colleagues were in Paris for the recent GSE Expo Europe event, and there was no shortage of interest on the ADVEEZ stand from both existing and potential customers in its current product range – and especially in some recently added features that support its Localeez telematics software.
ADVEEZ developed Localeez itself, just as it did the complementary hardware that is installed into GSE and which then provides relevant data for the system. It describes Localeez as “intuitive and interactive software” that displays reliable data in real time, easily accessible through its own web platform or directly onto a tablet or cell phone.
Data collected by the hardware enables monitoring of GSE performance in real time through the Localeez software. The latter will also trigger event monitoring alerts when applicable – such as when an operator is working in a non-approved area, or perhaps is using a particular vehicle without authorisation (the system can also be set up with an access control facility such that a non-approved operator is not able to start up a motorised GSE unit at all).
Dashboards allow management teams to analyse data such as the location and usage rates of GSE units, speeds, emissions, driving performance and so on, helping them to optimise their fleet management strategies. Appropriate maintenance plans can be planned and scheduled, and GSE operators might be asked to retrain if their performance on any given unit is not deemed up to scratch.
Available 24/7, Localeez comes with GPS tracking and can support an unlimited number of users, with all of a user’s GSE assets being visible on a single map display.

Ongoing improvements
A number of recently added Localeez features were highlighted in Paris. One such was the software’s ability to generate a ‘GSE driving score’ for any given operator. This score is derived in real time and takes in such factors as harsh braking or turning; rapid accelerations; speeding; and, of course, any impacts. From this data, either individual operators might need to be retrained or fleet managers can simply see how and where improvements in general driver performance might be encouraged across the fleet.
A second new facility comes in the form of automated speed control around aircraft. Thanks to geofencing technology, the ADVEEZ telematic system can pick up a GSE unit’s proximity to an aircraft and enforce a speed restriction on it, thereby minimising the potential for any ‘ramp rash’ in the form of GSE/aircraft collision. A couple of customers are already using this facility at different gateways, Moulinier confirms.
Another new feature enables operators to calculate the quantity of harmful emissions given out by any given piece of GSE. Based on data relating to a given vehicle’s engine type, fuel usage, duration of use and its performance during that time, levels of CO2 and NOx emissions, for instance, can be accurately calculated. Such analysis can help the ground services provider using that equipment to identify the most polluting units and subsequently take steps to mitigate those emissions.
Thanks to another improvement, Localeez now enables users to monitor battery performance and charging patterns of GSE too. If a particular piece of GSE is being consistently charged more than necessary, it is occupying valuable on-airport charging infrastructure, for example, and patterns of behaviour might need to be changed.
Earlier this year, ADVEEZ also began to offer an automated Occupational Safety and Health Safety Inspection Checklist. Typically, today, GSE operators might occasionally complete a hard copy such checklist – but this is rarely done, and the paperwork can be mislaid or not passed on and action points missed.
So ADVEEZ developed a mobile app that links to the hardware mounted in a GSE unit that enables the digital completion of a checklist. Moreover, any problems that are recorded can trigger an appropriate response – from small issues that send an alert to the handler’s maintenance team, to more concerning matters that will cause the vehicle to be disabled and prevent it from being started other than by approved maintenance personnel.
ADVEEZ is currently working on other new developments. For instance, it is improving its telematic software designed specifically for non-motorised ramp assets, such as dollies and towbars.
Meanwhile, the company is developing a sophisticated predictive maintenance algorithm based on new reporting structures; plus ADVEEZ is looking carefully into new billing capabilities that will support on-airport GSE pooling. “Good hardware and telematics software is vital if GSE pooling is going to succeed,” Moulinier points out, and that includes systems that enable an airport to bill its ground service providers according to their own individual GSE usage.
Finally, ADVEEZ is also working on a machine learning algorithm with a data scientist in order to take the value of its data analysis “to the next level”.