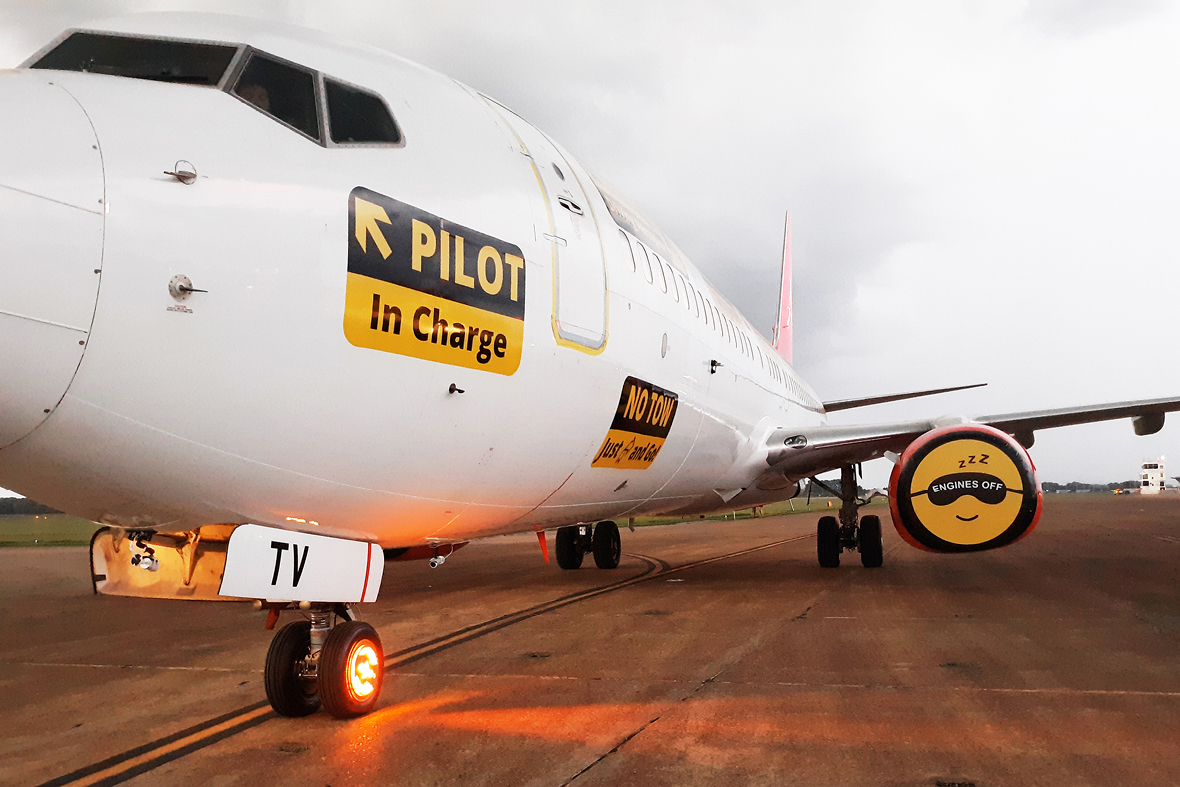 AlbaStar, a Palma de Mallorca-based airline that offers scheduled services but also specialises in specialist charter provision for pilgrims, tour operators, government bodies and even sports organisations as well as flights for passengers with restricted mobility (PRMs), has ordered a number of WheelTug units that will be retrofitted to aircraft of its existing fleet of five B737-800NGs. Delivery is expected in the latter half of 2023.
The deal with WheelTug also includes an option to convert its rights to A220 and/or Boeing MAX aircraft (when these systems become available), should the carrier decide to acquire these aircraft types.
A WheelTug unit, installed on the nose wheel of an aircraft, can drive the aeroplane forward and backward when approaching or leaving a gate. Using the power of the aircraft’s own auxiliary power unit (APU), WheelTug drives the machine either on to or away from a stand, obviating the need for the aircraft’s engines to run on power – they can remain on ‘idle’ – or for a separate pushback tug to be used at that point.
The aircraft’s pilot or co-pilot controls the movement of the aircraft from the flight deck. A camera system called WheelTug Vision can be fitted as part of the WheelTug product – as it will be for AlbaStar – to offer the aircrew all-round visibility from near ground level. This is thought to improve overall safety (for example, allowing the flight deck crew to confirm flap settings or cargo door closure), while also reducing the need for wing walkers at a time when ground handling staff levels are at a premium at numerous airports around the world.
The system is said to lower average turnaround times, as well as reducing aircraft fuel burn, minimising engine and brake wear and significantly lowering pushback costs. There is no jet blast on congested apron areas and noise is significantly reduced too, while in terms of harmful emissions, WheelTug asserts that using the system across the AlbaStar fleet will reduce the airline’s combined CO2 and NOx emissions by as much as 1,000 tonnes a year.
Michael Harrington, the CEO of AlbaStar, stresses the environmental benefits of the system in particular. “For AlbaStar to be the European launch customer of such an important project for cutting CO2 emissions is a great honor and we very much hope this will set a game‐changing example with other European airlines.”
As part of the agreement, WheelTug will have the use of an AlbaStar aircraft for system testing, as well as both ground and flight tests for certification purposes. These trials will build on a good teal of testing that AlbaStar has already carried out on the WheelTug system. In mid-September 2020, the WheelTug taxi system was put through its paces at Memphis International Airport by an AlbaStar aircraft. The aircraft tow technology was also shown off publicly for the first time in a live airport environment during the trials.

European launch customer
“Collaborating with AlbaStar in Memphis was such a positive experience that we are all the more pleased to partner with them again, this time as our [European] launch customer,” WheelTug CEO Isaiah Cox asserts.
He tells Airside that the “great relationship” that has been developed between WheelTug and AlbaStar actually pre-dates the Memphis testing by about six months, back to the early days of the global Covid-19 pandemic, and points out that the aircraft that was used in the trials at Memphis will actually be the official “launch aircraft” for the AlbaStar fleet when it comes to equipping its aeroplanes with WheelTug.
That machine will then become something of an operational, flying demonstrator of the effectiveness of the system.
Prior to operational use, training will be provided to both AlbaStar flight crews and the relevant maintenance personnel who will work with and on the system. This training will likely be browser-based and integrated with airlines’ own training programmes. WheelTug is looking to work with one or more specialised training companies in this regard to provide support as necessary.
The deal with AlbaStar adds to the letters of intent (LOIs) that have already been agreed between WheelTug and more than two dozen carriers representing more than 2,000 aircraft that have reserved delivery slot positions.
As well as airlines, Cox and his team are also working closely with airport operators to persuade them of the benefits of the WheelTug system and ensure that they would be comfortable using it at their gateways. Each airport has different procedures agreed with its customer carriers for pushback at its various gates – and there can be lots of them. WheelTug-using airlines will no doubt work with airport authorities to ensure that WheelTug is accepted as an alternative method of pushback, but WheelTug is also collaborating with a number of airports to “get ahead of the game”.
For example, Cox informs, the Adani Group, which acquired Indian hub Mumbai International Airport only last year, recently completed a feasibility study on the potential use of WheelTug: the report pointed to a likely improvement in turnaround times as well as other advantages alluded to above.
WheelTug is co-operating with Germany’s Paderborn Lippstadt Airport on the role that WheelTug can play in its ‘FastGate’ strategy and is also working with the Czech Republic’s Prague Airport on a WheelTug feasibility study for the gateway.
Meanwhile, WheelTug is working with the Federal Aviation Administration (FAA) to gain certification with the US aviation regulatory body. WheelTug’s certification plan has been accepted by the FAA and, all being well, WheelTug can move on to obtaining certification with bodies like the European Aviation Safety Agency (EASA) and relevant bilateral agencies.
It is a very exciting time for the company, Cox says, especially as he is confident of more forward orders for WheelTug slots with other carriers in the near future.