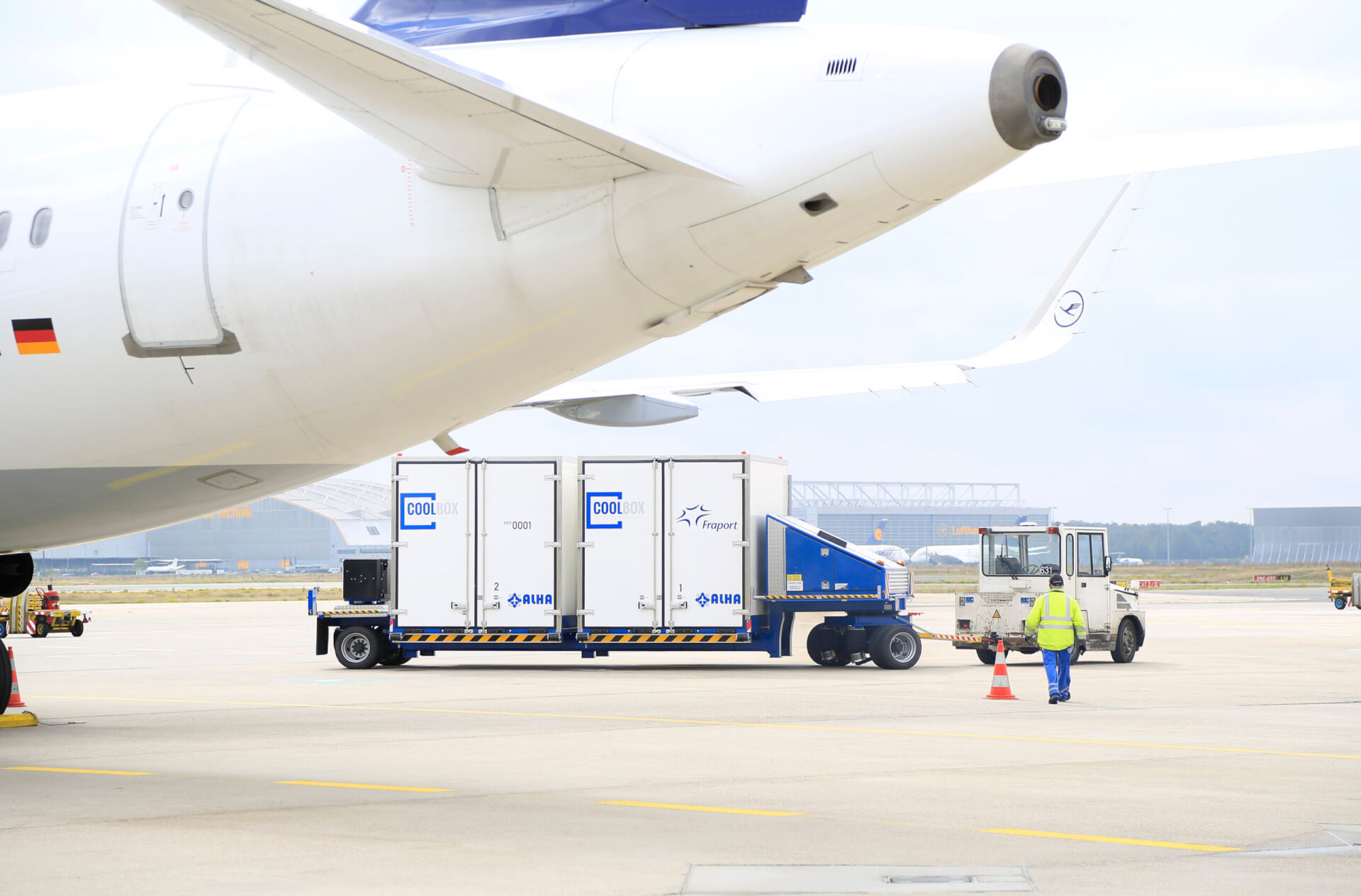 CoolBox is manufactured by Alha Group’s own GSE manufacturing company, A+tech. A brand new design, the refrigerated dolly offers a handler the ability to move pharma and other perishable cargo from a warehouse or specialised pharma facility to an aircraft (or vice versa), without breaking the cool chain.

CoolBox is said to be the largest cool dolly on the market. Its interior consists of two main deck units and two independent spaces (‘cabins’ or ‘rooms’) with separate cooling systems. Each cabin is also fitted with an individually adjustable cooling system. Even when the engine is switched off and the outside temperature is as high as 30°C, the cabin will remain at the set temperature for over an hour.

The vehicle has been successfully tested in ambient temperatures ranging from -20°C to +50°C. It has an electronic temperature monitoring system and a tracking system, which enable continuously transmission of up-to-the-minute loading information. CoolBoxes are powered by hybrid engines.

Alha currently has five CoolBox units at its cargo terminals at Milan Malpensa and Rome Fiumicino airports. The two units acquired by Fraport, meanwhile, are to be used at its home base of Frankfurt Airport.

Recognition
Alha Group sales manager Andrea Piai tells Airside that the two CoolBoxes, delivered by Alha via special convoy directly to Fraport in the third week of July, represented the first time that the Italian handler had worked with Fraport. “We are proud and honoured that they immediately pinpointed the added value CoolBox can bring to airport cargo operations,” he says.

CoolBox was first shown off to the market only a little more than a year ago, at the combined transport logistic/Air Cargo Europe 2019 event in Munich, where it attracted the attention of ground handling agents and airport authorities alike.
Since then, Piai reports: “The CoolBox has been recognised as a prime product and has created great interest in the [aviation] market. We have been approached by various international players (airports and airlines) and have had open discussions [with them].”

The cool dollies are the work of A+tech, a new GSE division of the Alha Group, entirely dedicated to the development and production of ground support equipment for the air cargo industry.

Its products are developed on the basis of operational experience gained in the field, Piai says, and are designed to manage complex air cargo operations in an agile and efficient way. A+tech solutions are made entirely in Italy and are built according to the highest standards of quality, safety and respect for the environment, he insists.

“The initiative started when we saw that the market did not offer what we were looking for – in respect to the fact that we are a ‘one-stop shop’ service provider for cargo warehouse and ramp handling services and that we specialise in controlled-temperature services, operating to IATA CEIV Pharma and Fresh certification standards.”

The International Air Transport Association’s CEIV – or Center of Excellence for Independent Validators – Pharma and Fresh programmes set the highest standards for those companies and agencies involved in moving temperature-sensitive commodities by air.

Piai continues: “In order to further streamline our handling timings and operational performance, we had a clear idea of what we needed, but what was offered on the market did not meet our expectations. That’s when we decided to develop our vision and started production of the first concepts of the CoolBox.

“From that day it has been continuous improvement of the product, up to the presentation at the transport logistic trade fair last year, which was a big success.”

A+tech also manufactures side-loading 40ft dollies and is currently developing a new product – though one on which it is “too early to comment” – that is related to the 40ft dolly but “has the potential of being a game changer like the CoolBox”, Piai declares.

“A+tech was created to satisfy our needs as an air cargo handler and to further our vision of [developing] innovative high-tech tailor-made GSE. The short history of A+tech and the CoolBox testifies how passion for the air cargo industry can lead to the creation of new solutions to make air freight better, more efficient and competitive,” he concludes.

Fraport builds its cool-chain fleet
Fraport’s acquisition of the two CoolBoxes from Alha takes its fleet of cool chain dollies to 20.

“The two new refrigerated transporters will give us maximum flexibility when it comes to handling temperature-sensitive goods,” advises Siegfried Pasler, head of ground handling services at Fraport.

“We have profound expertise in this area, and our customers benefit from this. It means that we can offer ideal infrastructure conditions together with our partners at Air Cargo Community in Frankfurt.”

Max Philipp Conrady, head of cargo infrastructure and development at Fraport, adds: “Last year, we handled 120,000 metric tons of pharmaceutical products at Frankfurt Airport, making us Europe’s leading pharmaceutical hub. The expansion of the fleet significantly underpins our status even further, particularly with a view to the upcoming transportation of the coronavirus vaccine.”

Conrady confirms to Airside that Fraport is – as of late October – training its staff in handling the new CoolBox transporter units, which, he says, will soon go into service.

“With this latest acquisition, Fraport boasts one of the largest fleets of cool-chain dollies in the world – a total of 20 units that are all deployed at Frankfurt Airport,” he notes.

“Thus, our Fraport Ground Services division is optimally equipped to meet the growing demand for continuous cool-chain logistics and transport on the ground at Europe’s busiest air cargo gateway.”

Fraport has been using temperature-controlled transporters at Frankfurt for more than 20 years. Says Conrad: “Our experience [of them] has been very positive. Furthermore, along with expanding our fleet size, the new units provide additional benefits and flexibility. Each CoolBox has two cabins. There is capacity for two lower deck units, whereas the existing cool-chain dollies can only transport one lower deck unit.

“Each cabin can be accessed efficiently from both sides which simplifies handling. And each cabin has its own individually adjustable cooling system. Conrady also highlights the units’ temperature monitoring and tracking systems.

Frankfurt Airport has around 12,000 square meters of temperature-controlled handling capacity, with direct apron access. Some two-thirds of this capacity is to be found in the modern Lufthansa Cargo Pharma Hub. An additional 2,000 square meters of space at CargoCity South will soon be taken into operation at the new Swissport facility there.

“During the handling of urgently needed protective equipment and other vital pharmaceutical goods at the beginning of this year, we showed that the Frankfurt cargo community makes an essential contribution to supplying the population,” Conrady observes. “More than a billion protective masks reached Europe via Frankfurt during the earlier months of the Covid-19 crisis.”