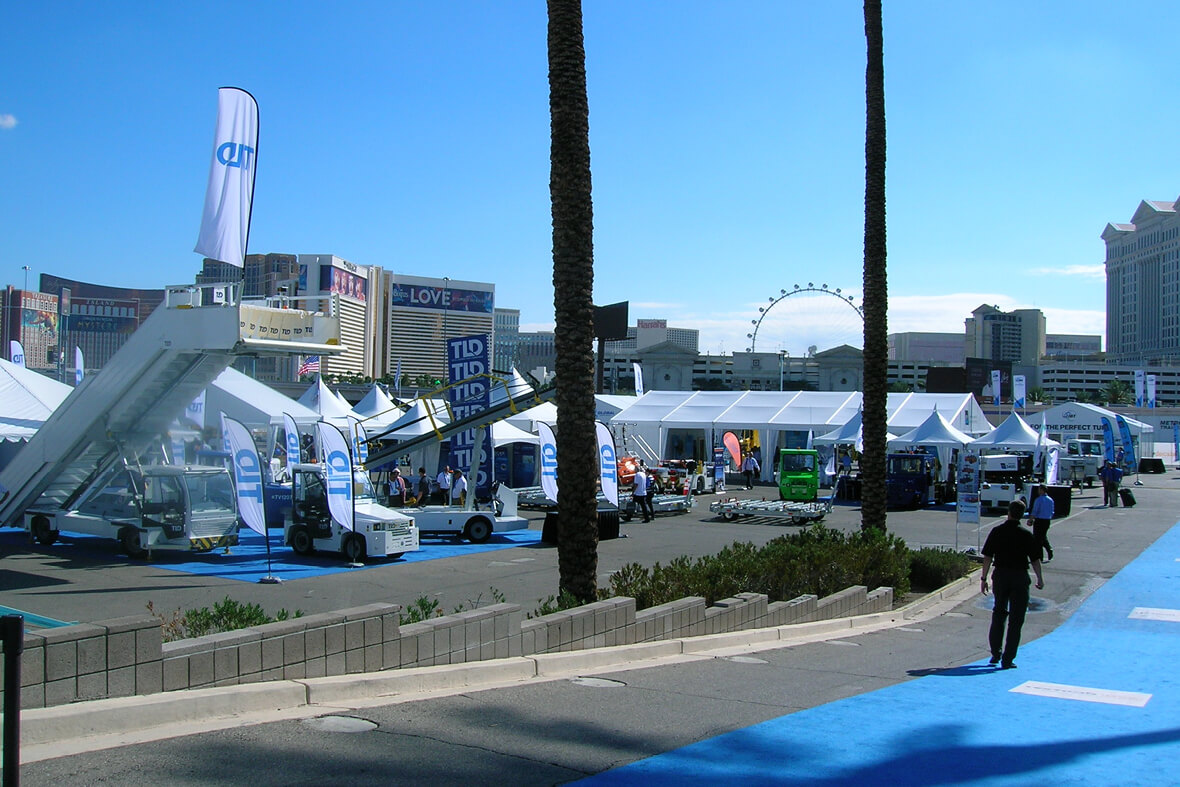 This year sees the addition of a new, important industry show: GSE Expo Europe, organised by the International Airport Equipment Manufacturers’ Association (IAEMA) in partnership with Ground Handling International (GHI), will be held at Le Bourget Exhibition Centre in Paris between 13 and 15 September

GSE Expo Europe is to be a “dedicated community hub for GSE suppliers and users”, the organisers say: “a place where companies supplying different types of GSE can pool ideas and share innovations to help operators rise to the challenges of the post-pandemic landscape”.
The expo will be “delivered by the GSE community, focusing on the needs of the GSE community”, they add.
GSE Expo Europe is to take place in even-numbered years, while IAEMA’s Las Vegas, US-based International GSE Expo – an event all those involved with GSE know well – will now take place in odd-numbered years.
Another event that those involved in the industry are familiar with is inter airport Europe. This also takes place in odd-numbered years, thus the scheduling of GSE Expo Europe ensures that there isn’t a ‘clash’ between the two big European GSE shows.
Historically, the Vegas show had been in even-numbered years. The industry therefore enjoyed what Michael Bloomfield, board chair of IAEMA (he also founded the well-known Sage Parts), describes as an “every other year cadence” with inter airport Europe. But when the Covid-19 pandemic forced a postponement of the 2020 show and Bloomfield approached inter airport show organiser Mack-Brooks Exhibitions to see if that show could or would be moved to avoid a schedule clash; there was little indication of any compromise, however. Indeed, there was an indication that the inter airport expos would be broadened out such that there would be events for three consecutive years.
Given that situation, the decision was taken to launch GSE Expo Europe in 2022 – an even-numbered year avoiding the year of inter airport in Munich – while the Vegas show would be held from 2023 in odd-numbered years.
Bloomfield and his colleagues at IAEMA are very aware of the danger of there being too many industry expos. Indeed, one of the prime drivers when IAEMA was established was that it would attempt to ‘consolidate’ the number of industry events and it has sought to do so since. However, there is room in the industry for this new show, IAEMA strongly believes.
Another key driver has been keeping IAEMA expos “affordable”, says Bloomfield, and this it has done with the Vegas event. Meanwhile, the Munich show had become very expensive for IAEMA members, he opines, perhaps as a result of the very success of the show over the years.
The size of the inter airport Europe event had also become an issue for some IAEMA members, he continues, in that it had moved away, or “become diluted”, from being fairly exclusively GSE-oriented to incorporating a huge range of airport- and aviation-related products and systems. In that process, it had become impractical as well as expensive for many GSE suppliers, Bloomfield suggests.
Other issues that IAEMA members had pointed to as being less than ideal for them when exhibiting in Munich was the inclement weather that could often be experienced at that time of year (October), as well as the costs of hotels and the like (and their distance from the venue outside Munich).
The decision was taken for IAEMA members not to attend inter airport Europe 2021 in favour of their own expo in Paris this year.

Time for a change
Even without the pandemic and the issues that threw up, “I think everybody would have come to the realisation that it was time for a change,” Bloomfield says of IAEMA and its members’ thinking on the European expo position.
The next challenge for IAEMA was to find the right location in Europe for its new show. IAEMA and its partners considered many options before the decision was taken to opt for Paris and Le Bourget.
Paris is a fantastic city for visitors, Bloomfield points out, while the weather in the French capital in September is usually great. Meanwhile, Le Bourget – which hosts the huge Paris Air Show every other year – has no shortage of indoor exhibition space and vast areas of outdoor areas for exhibition stands, ideal for showing off large pieces of GSE as well as equipment demonstration areas.
Costs for exhibitors at the show will be kept “affordable”, Bloomfield says, with IAEMA members getting a “significant discount” on stand costs.
GSE Expo Europe will be modelled on its successful Vegas counterpart, he continues. Similar to the US event, there will be a demo area for GSE, while the whole event will be devoted entirely to GSE rather than the wider aviation and airport business.
Unlike Vegas, there will be a seminar/conference element to GSE Expo Europe, with neutral industry experts offering their thoughts on subjects of contemporary relevance to GSE suppliers and users.
A key focus of the show as a whole, and the conference element of it in particular, will be product innovations and emerging and maturing technologies that improve safety, or that relate to autonomous GSE operations and hybrid/electrical vehicles. Indeed, the event will be a “dedicated forum for driving stakeholder collaboration and best practice sharing between equipment suppliers and frontline airport users”, its organisers say.
By as early as mid-March, 80% of exhibitor stand space for the event had already been booked. By the end of April, more than 100 stands had been taken up and 13,166m2 of space booked, about 91% of the floor plan. However, there is room to expand the space that IAEMA has reserved, so there is no danger of reaching capacity. And, as regards visitor numbers, Bloomfield is confident that the attraction offered by the attendance of IAEMA’s premium GSE suppliers alone will bring in large numbers of GSE operators.
On that note, Bloomfield confirms that as of the end of April, IAEMA had 88 GSE manufacturer members. But that number was growing fast and he hopes that the membership might reach as high as 150 by the end of this year.
Whether or not this ambition comes to fruition, IAEMA’s membership roll includes the biggest of the industry’s GSE suppliers as well as many smaller manufacturers, thereby covering the “full spectrum” of size, and a “great cross-section” of the GSE business.

A new era
“I am hoping that this will be the start of a new era,” Bloomfield says. “Hopefully, we are now solidly post-pandemic and by September we will be moving into whatever is the ‘new normal’.
“GSE Expo Europe will really focus on product innovation and we are looking forward to seeing a lot of technological advances around greener, more autonomous equipment and other technologies that will lead us into the future,” he concludes.