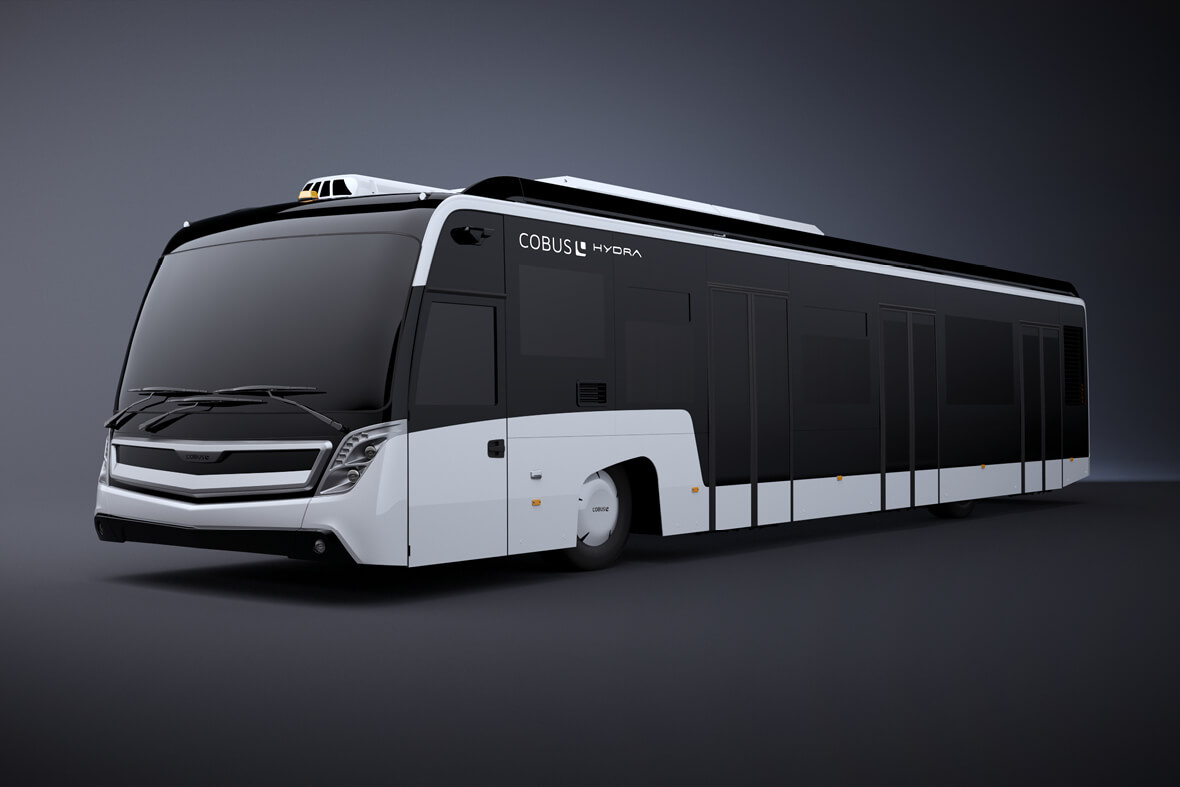 As with so many types of GSE, there seems to be an unstoppable trend towards electric equipment when it comes to those all-important apron buses that carry passengers to and from airports’ remote stands. Many of the established apron bus manufacturers now offer dedicated electric variants of their traditional diesel buses, while specialist electric vehicle suppliers are now eyeing the aviation space as a market

Wiesbaden, Germany-headquartered airport bus specialist COBUS Industries gave visitors to its stand at the GSE Expo Europe show in Paris in September a taste of two new, innovative apron bus models.
The first was an early example of what is expected to be a new line of electric buses. The model is called COBUS Vega, named after the star that is amongst the brightest in the night sky. The Vega line will complement the existing range of electric e.COBUS vehicles that were launched in 2016 and which will continue to be marketed and sold alongside the new Vega class of buses.
The fully electric Vega bus has a completely new chassis and, while it has the same external dimensions of an e.COBUS, it has additional passenger carrying capacity due to a change in the layout at the front of the vehicle around the driver’s cabin; as such, it is being marketed as the world’s biggest airport bus by passenger capacity.
It retains the same level of comfort as that enjoyed by passengers travelling to and from remote stands on e.COBUS vehicles, however. While the chassis is the same size as that of the e.COBUS, the COBUS Vega features other design changes that include a fourth door on the front right-hand side of the vehicle (adding to three extra-wide doors on both sides of the bus).
The COBUS Vega incorporates new battery technology from COBUS minority shareholder Daimler Truck. Either two, three or four lithium-ion NMC3 battery packs will be carried, depending on customer requirements – if the bus is working in particularly hot or cold climates, more battery power may well be required to run either air conditioning or heating units, for example.
Two COBUS Vega prototypes, including the one on the COBUS stand, are currently in Germany in preparation for intensive testing and Laila Engler, the company’s head of marketing and sales manager, confirms that COBUS hopes to be rolling out the first fully operational Vega model for sale in 2024.

New constellation
Also cause for discussion on the COBUS stand in Paris was news of an all-new COBUS Hydra hydrogen fuel cell-powered airport bus line that is currently in the final development stage. The Hydra brand continues the star-based theme for the bus supplier (Hydra is a constellation – the largest in the sky), as well as offering a nod to the hydrogen-based nature of its power source.
While COBUS Hydra represents the world’s first hydrogen fuel-cell powered apron bus, the hydrogen fuel cell – a Toyota fuel cell stack – that will power the Hydra is already proven in bus operations, confirms Engler. Daimler Truck has a minority share in COBUS Industries, but the majority shareholder is Portugal’s Salvador Caetano Group; Caetano’s primary shareholder is Toyota, hence the tie-up with the Japanese industrial giant. Meanwhile, CaetanoBus also offers a hydrogen fuel cell-powered bus of its own.
The COBUS Hydra is based on the e.COBUS 3000 vehicle design but its fuel cell will give it a range of 400km hydrogen without top-up. A refill takes less than nine minutes at an optimal charging station, while the water that is created as a by-product of the process that generates the bus’ drive power can be collected for later use.
Engler is hopeful of a COBUS Hydra prototype being ready for testing next year.
With the Vega and the Hydra added to the already extensive range of battery-powered e.COBUS and diesel COBUS vehicles, there will be an ideal design for any airport operator looking for low-floor airport buses, she states.
Moreover, as well as those looking to purchase new vehicles, COBUS also offers the capability to retrofit customers’ existing vehicles to more environmentally friendly options – a service called e.START. For example, those customers that want to continue to use conventional diesel engines for the moment might choose to move to battery or hydrogen fuel cell power packs at some point in the future, something that COBUS can undertake as and when required.

After-sales and training
COBUS places great emphasis on the services it offers around the physical element of its buses. Thus, for example, it offers a range of financing and rental options for customers, while the COBUS Service Team provides a wealth of factory overhauls and refits as well as spare parts for customers.
A new service known as REAL – short for Remote Expert Assistance [for] Life – enables those who are looking to maintain or repair their own COBUS vehicles and who have the appropriate virtual reality (VR) glasses to be tutored as to what work they might need to perform using the state-of-the-art VR equipment.
REAL complements COBUS’s dedicated online service platform that includes numerous manuals, details of warranties and possible maintenance programmes for customers to access digitally.
Finally, the company also recently launched a COBUS Academy to step up its training offering. Trainees can receive instruction digitally, at COBUS’s facilities or at their own place of work.

Mallaghan’s i-tec innovation
Dungannon, Northern Ireland-based GSE supplier Mallaghan is developing an innovative range of electric ground support equipment under its i-tec brand, amongst which is its Árbus electric airport bus.
This vehicle can carry up to 118 passengers in comfort and features hydraulic front steering, pneumatic, regenerative braking and pneumatic suspension, with kneeling available on both sides of the vehicle. Driven by a 250kW Automated Magnet Motor, the Árbus is available in five battery capacity configurations for different customer requirements.
The vehicle was introduced at the end of 2021 with Ryanair as its launch customer. Tadej Podgrajšek of Mallaghan’s Airport Bus Sales Division explains that the electric Árbus has been “warmly received by the market”, not least because it offers an “operational solution for any size of airport, large or small”.
Of particular note is the fact that there is no requirement for any special electrical infrastructure and the electrical power sockets required for bus charging can be the same as those utilised for some other electric GSE equipment. Thus, there is no need for additional investment into growing power grids to make 100A+ available – which means airports and operators can avoid extra costs by using Mallaghan electric buses, Podgrajšek notes.
He is fully expecting Mallaghan’s emphasis on environmentally friendly GSE to only gather momentum. “With public statements from airports and airlines [promising] to reduce carbon emissions within aviation over the next 10-20 years, we anticipate our focus shall pivot from manufacturing diesel buses to electric buses within our target markets over this same period,” Podgrajšek says.
In fact: “We are confident that electric buses will soon replace the majority of diesel buses within the UK, EU and North American markets over the next five years. For this very reason, we anticipate our sales and production focus shall move from diesel buses to electric throughout this period.
“For this reason, both the European and North American geographical zones are of primary focus [to us], since these regions are at the forefront of green initiatives to reach stated ‘net carbon zero’ targets.”
Mallaghan has plans to further develop the environmentally friendly Árbus. Podgrajšek explains: “From our first Gen I range of electric buses we are already developing our Gen II model to include improved passenger capacity and other technical innovations.”
Furthermore: “We are currently developing a future version of the drivetrain for our electric buses to further increase the performance advantages that we offer today. More exciting innovative news from Mallaghan is to be announced soon,” he confirms.
Future developments will build on a vehicle that has been well received by the industry. “We have had very positive feedback to date” on the electric Árbus, Podgrajšek informs. “Our airport buses (both diesel and electric) are earning a market reputation for all the [same] positive reasons as our other GSE products – technical innovation, high quality, reliability and ease of use and maintenance.
“These are the features that Mallaghan has become renowned for and this typifies the feedback we are receiving from our bus customers.”
Mallaghan continues to offer its diesel-powered Árbus 50W model alongside the electric version. And, in general, Podgrajšek notes: “Demand for airport buses is recovering very well but we don’t expect it to be back to 100% normality until passenger recovery figures reach 100% or more.”

Quantron: a dedicated electric offering
Augsburg, Germany-headquartered Quantron is a specialist in what it calls ‘e-mobility’, and its product portfolio takes in electric trucks and transporters of various kinds, including buses.
As might be expected, the company is rapidly developing its product offering, including those vehicles that it sees as ideal for the airport bus market. Alexander Stucke, head of sales bus at Quantron, advises: “Our product portfolio for the aviation industry has broadened quite a lot. In the LCV [light commercial vehicle] sector, our retrofit QLI Light range has been expanded and we can offer vehicles from 3.5 to 7.2 tonnes for different applications.
“Plus, we have launched our 12m Cizaris electric vehicle as a low-floor bus. This bus is ideal for airport operation due to its flexible seat layout and availability of a three-door version. With the different battery options available, we can also easily adapt the vehicle to the range that is needed for the customer’s specific operation.”
While Quantron does not as yet offer vehicles that are designed specifically and only for the airport market, “We are also deeply looking into fully adapted airport buses – though in this area we are only in pre-market study,” Stucke notes.
That potential evolution is being stimulated by the fact that Quantron has received some “really good, detailed requests for proposals for buses that are suitable for airports”, he says. “Regarding LCVs in the aviation sector, we have had some requests but it seems that airports are concentrating more on people-transport.”
The requests for proposals relating to airport buses are also illustrative of a general recovery in demand for buses that Quantron is now seeing, Stucke suggests. “The pandemic has for sure delayed some investments in eGSE (electric ground support equipment), but we see growth coming up,” he says. “Green purchasing requirements will not stop at the airport fence. ebuses will be the future on-airport for sure. And yes, Quantron is prepared to meet the challenge [for electric bussing] at airports as well.”
Conversion of older diesel buses to electric by Quantron is a possibility but the financial viability of such an adaption is unlikely in most cases, Stucke says. “It is really down to the business case for each request, with comparison of retrofit and new.
“We have decided to concentrate on new buses, with the big advantage that the unit is then really built from the ground up as electric and so the batteries or even hydrogen fuel cell can be integrated totally differently.
“Also each bus is different and does need a new adaptation in both hardware and software. So the value of modifying an old bus considering the cost of conversion is likely to be very limited,” Stucke concludes.