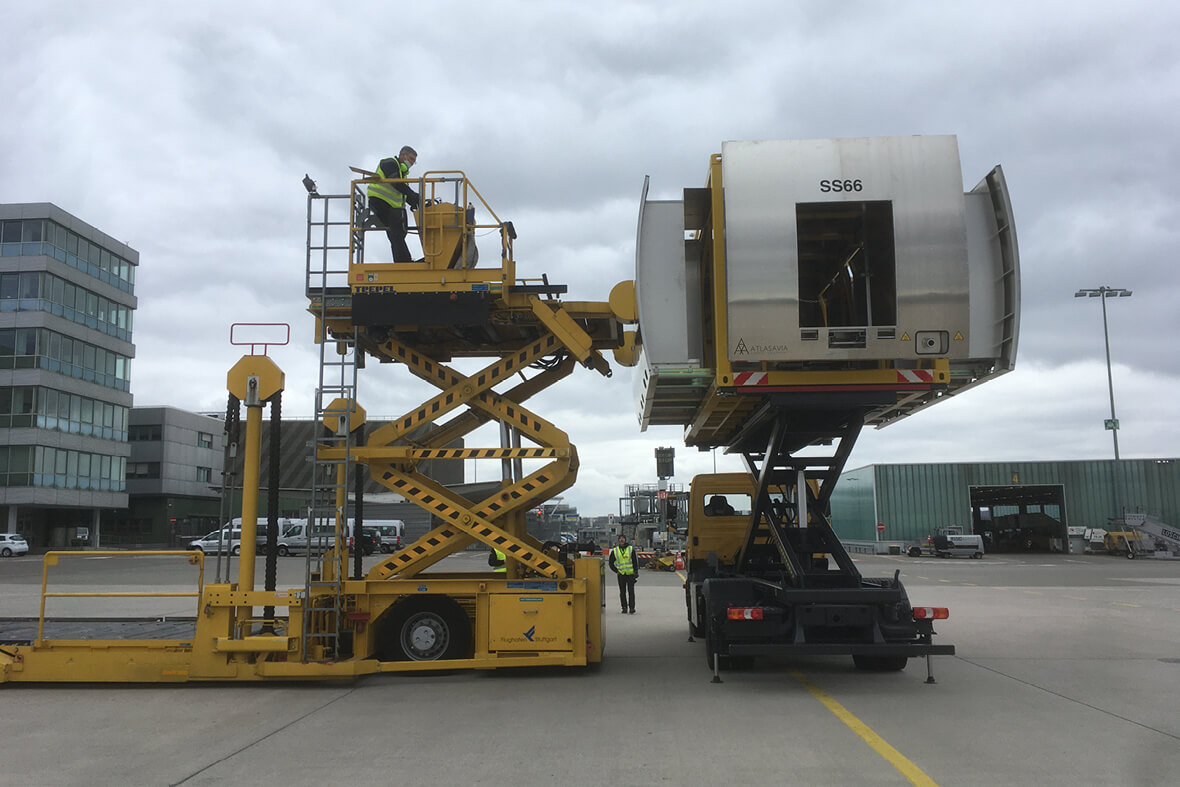 ATLASAVIA is perhaps best known for its sale and lease of refurbished GSE, and especially catering high loaders, but it has lately gone into the business of manufacturing its own equipment for the first time – a training aid for GSE operators that simulates an aircraft body and is now in use at Stuttgart Airport

Christoph Fladung has been the CEO of ATLASAVIA since 2019, prior to that having acted as sales director at the Frankfurt Airport-based company. But his connections with ATLASAVIA pre-date that – in fact, it was his father who started the business more than 30 years ago.
ATLASAVIA began life selling and renting refurbished high loaders, and especially aircraft catering trucks. It wasn’t until 2015 that the decision was taken to convert one of ATLASAVIA’s own scissor vehicles into a training accessory that could be used to simulate an aircraft fuselage. This early prototype – displayed at the inter airport Europe show in Munich that year – was not perfect, and was not cheap, but it did show that such a unit could be made available and that there was demand for such an accessory.
Later, in 2018, Stuttgart Airport expressed its interest in acquiring something that could fufil a similar role and ATLASAVIA built from scratch what has been called the Ground Handling Training Vehicle, also developed from a scissor-lift unit.
It is not the only such training aid on the market – for example, Northern Ireland-based Mallaghan has its Airside Training Vehicle, also built on a scissor-lift vehicle, designed for ground handling, workshop and airport fire crews on GSE operational and safety-related issues. But they are rare and the one built by ATLASAVIA for Stuttgart Airport and delivered there in spring this year is performing well.
The training aid at Stuttgart has been refined slightly since delivery to marry up yet more ideally with the airport operator’s requirements but – highlighting the success of the tool at the gateway – a second unit is due to be delivered to Stuttgart in the next two or three weeks (at the time of writing in late July).
The tool is ideal for handlers of GSE types including passenger stairs, belt loaders and container loaders or other high lifts such as ambulifts and catering vehicles, but can also be used for operators of other GSE types, including air start units (ASUs), lavatory service units, water trucks and ground power units (GPUs).
It extends from 1.4m up to a height of more than 5m to simulate different aircraft types, while thanks to its modular construction different aircraft door dimensions can also be simulated for varied elements of passenger and cargo operations-related training. The box unit part of the vehicle without the scissor-lift chassis can also be used as a stand-alone solution.
The training aid enables handlers to learn in familiar surroundings and with their own GSE, without the expense and difficulty of obtaining and using different aircraft types for training. Particularly importantly, especially given that so many new aircraft today are manufactured with carbon fibre that doesn’t always show the effect of an impact, it also allows operators to be trained such that they don’t allow their GSE to come into damaging contact with aircraft fuselages.
The Ground Handling Training Vehicle is road legal, so could easily be moved by handlers across multiple stations at which they are active as a roving training tool. As of today, ATLASAVIA is only considering selling the units, but rent/lease might be an option at some point in the future. According to Fladung, the company could manufacture up to eight such units a year should demand require it.
Meanwhile, ATLASAVIA’s regular sale and leasing of refurbished GSE continues. It’s not been an easy time, of course, and Fladung is expecting the market to remain depressed for at least the remainder of this year. He is hoping to see some recovery by spring 2022.