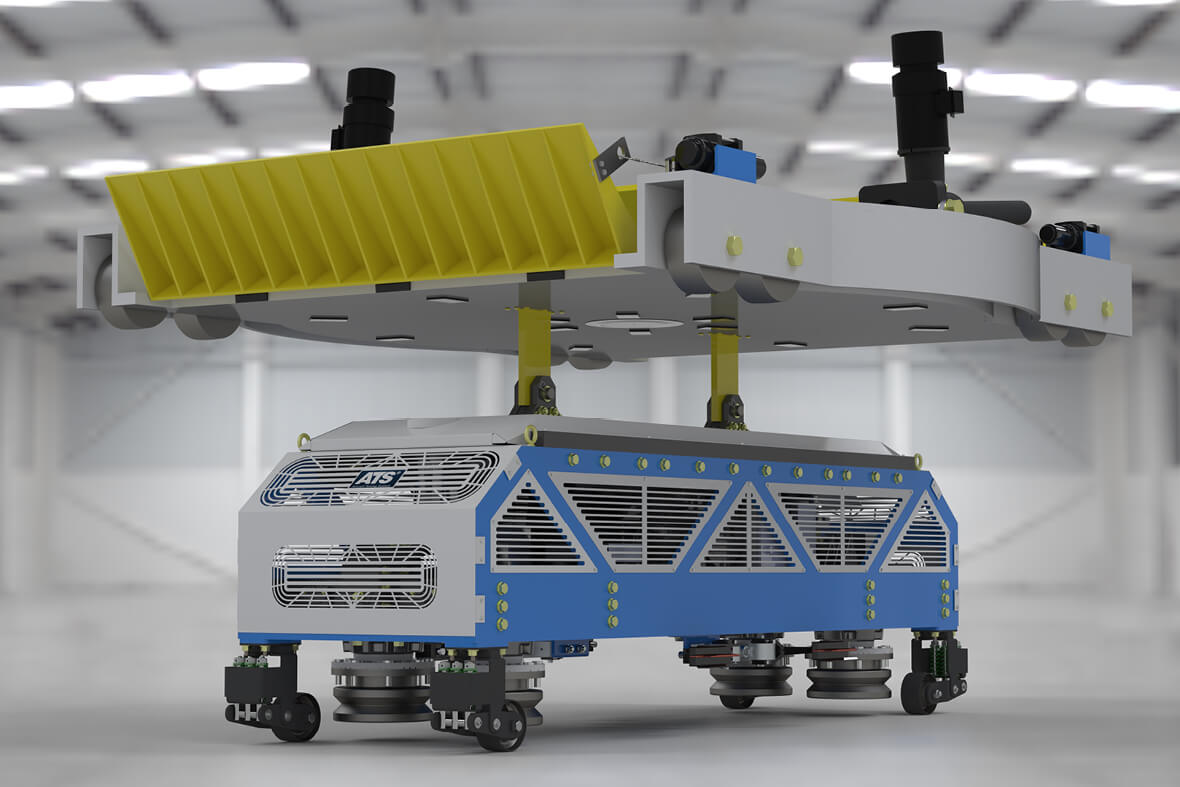 Aircraft Towing Systems Worldwide Inc (ATS) has developed an innovative system that would move an aircraft between an airport runway and an airport gate, without the aircraft having to use engine power. It is hoped that the fully automated design will – among other benefits – allow significant savings on fuel, facilitate faster pushback times and enable greener aviation operations

At the heart of the ATS system are channels installed under an airport’s apron surface that link taxiways to gates, along which runs a sub-surface electro-hydraulic powered cart or pullcar that provides a base for an above-ground dolly into which an aircraft’s nose wheel is secured.
The design envisages a pilot driving onto the appropriate taxiway after landing and positioning the aircraft nose wheel onto the ATS tow dolly. Once secured in the dolly, the pilot can shut down the aircraft’s engines, leaving only the machine’s auxiliary power unit (APU) operating to provide the necessary power for cabin air conditioning and other ancillary systems.
The aircraft is then pulled – without any pilot involvement from the flight deck – by the pullcar/dolly combination along the sub-surface channels to the appropriate gate. The pullcar is powered by a 400hp electric car motor that drives hydraulic pumps and electric motors placed at either end of the cart to power it.
The system can also be ‘flipped’ such that the same infrastructure enables pushback from an aircraft stand out to the end of the appropriate taxiway, at which point the aircraft’s engines would be started.
ATS would be fully integrated into an airport’s ground control systems and could be either entirely automated or controlled as necessary by ground tower personnel.
Consisting of three closely connected system elements – the channels, the pullcars/tow dollies and controlling software – ATS envisages that it could save the aviation industry huge amounts of money on fuel burn, as well as drastically cutting emissions and lessening airport noise.

Genesis
ATS has an interesting history. CEO Vince Howie explains that the business’ founder and president, Stan Malicki, was in the plumbing business in his native Poland and, when a pilot friend remarked upon the fuel wastage created by extended taxiing at numerous airports, asked a number of former helicopter engineers he had in his team to assess the problem.
It was they who came up with the original concept that has grown into today’s ATS.
In 2015, Malicki met Howie, who was then working as the director of aerospace and defense for the state of Oklahoma, at the Paris Air Show. They chatted about the electric tug system, and Howie could see the potential benefits. Moreover, as part of his job was to encourage aviation-based business to develop a presence in Oklahoma, his interest was certainly piqued.
Malicki, too, could see the advantages on offer in Oklahoma and so, in 2016, took the decision to move his business there. That same year, Howie left his job with the state and took up his role with ATS.
While the concept was well developed, the idea was still far from reality at this stage. So, experts at Oklahoma State University (OSU) were tasked with developing a prototype.
Since then, progress has been slowed by the onset of the Covid-19 pandemic – but as of autumn 2021 channels have been dug under the surface of the Ardmore Industrial Airpark, located about 16 miles from Ardmore, Oklahoma. Furthermore, a B727 aircraft has been purchased from the now defunct Kitty Hawk cargo airline (and painted in ATS livery) to act as a testbed, and testing of a prototype pullcart and dolly is expected to commence within a matter of weeks.
Citadel Construction has acted as the primary contractor at Ardmore on the infrastructure development side of the project there, while the pullcar chassis is currently in Tulsa, as is the cart’s hydraulic system. Also in Tulsa is the software company working on that element of the design, while the dolly is in Wichita Falls, Texas, where it is being readied for prototype testing.

Extensive market
Initially, ATS had targeted a potential early market of 34 air hubs in the US and perhaps 50 or so abroad. Large hubs such as Chicago O’Hare and Dallas/Fort Worth were – and still are – regarded as prime candidates for the system because of the huge potential benefits that they might leverage from employing ATS.
Also, in its early stages, the system had really only been envisaged for use by landed aircraft moving to their gates. However, discussions with delegates at a meeting of the American Association of Airport Executives (AAAE) highlighted to Howie just how big a demand there was for a pushback option, particularly at smaller air gateways.
As a result, ATS developed the system further so that it can be ‘flipped’ and used for pushback as well as movement to gates.
The appeal to smaller gateways of this extended capability has significantly expanded the potential market for the system, Howie believes. He and his colleagues are currently looking at a potential market of some 300 or so gateways in the US and abroad.
While only one size of pullcar and dolly has so far been developed, ATS expects to offer three different sizes for handling different aircraft types: one for smaller aircraft, one for the mid-size range and one for the biggest of commercial aircraft (right up to A380s). Because many gateways would never need to handle the largest of aircraft, or even widebodies as a whole, a variety of design options makes a good deal of sense.
The size and complexity of the airport would also of course have a significant bearing on how the ATS system would be designed and would operate at that specific location. In general, however, Howie expects all of an airfield’s taxiways to be linked to each gate, with junctions in the channel system acting like points on a railway network that would enable the dolly/cart to move from any taxiway to any gate (and vice versa).

Benefits
The potential benefits of the system are numerous, Howie explains. He points in particular to:

Of course, any airport authority installing the system would incur an up-front cost as well as potential disruption to airfield operations. However, Howie believes that the return on any such investment might only take something in the region of two years, while the impact on operations could be minimised through constructing the channels and installing the system at night or at the same time as other repair work.
Howie estimates that installation might take around 10 to 12 months at a major air hub, and less time at a smaller gateway, but the system is modular and can be introduced incrementally to minimise disruption if required.
“As regards installation, it all depends on how airport authorities would want to do it,” he says. Extensive ATS simulation modeling of the airfield and consideration of the optimal deployment pattern of the system would be necessary first.
The optimum situation would of course be to install ATS at an airport being built from scratch.
The airport operator would have to incur costs associated with installing ATS but the benefits would quickly offer compensation by way of return on investment, Howie observes. He believes that the cost savings enabled by ATS could be shared equally amongst the airlines using any given airport fitted with the system (through reduced fuel costs, in particular) but that the airport authority would enjoy the other 50% of the financial benefit by means of the increased airport charges it could levy on airlines.
ATS is in discussions with numerous airport operators about ATS, many of which have shown plenty of interest, Howie informs. Some, such as London Heathrow, have been keen to see the system in action, though perhaps unwilling to act as a beta tester for the design themselves.