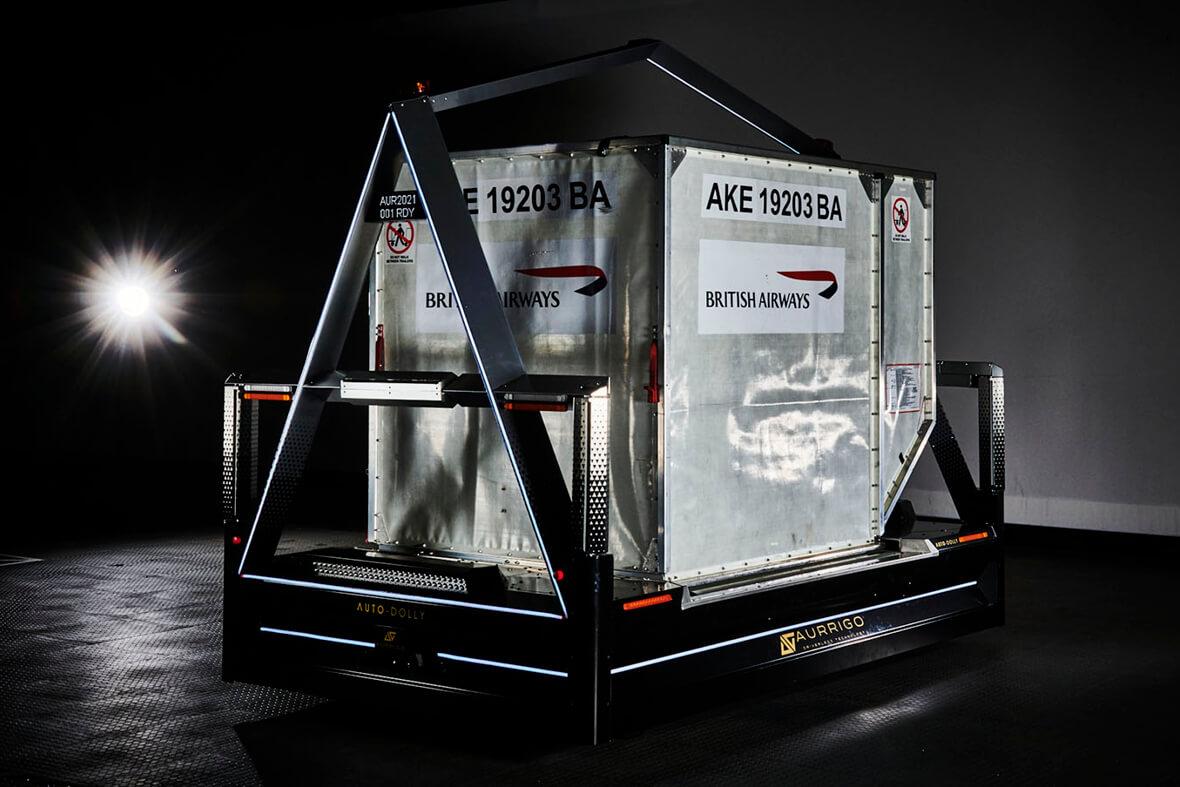 Aurrigo claims that the Auto-Dolly could reduce the number of traditional tugs and dollies used at an airport by up to two-thirds. This figure is derived from recent simulations conducted with “a leading Far Eastern airport”, part of whose physical footprint was measured, recorded and fed into a computer model that simulated potential Auto-Dolly operations at the gateway.

This possible reduction in on-airport equipment would mean not only cost savings for operators but also a significant reduction in harmful emissions otherwise created by diesel baggage and cargo tractors.

The electric Auto-Dollies can navigate autonomously, moving from one task to another, being available for picking up and then dropping off items without the need for any human operators. Moreover, they are able to move baggage or cargo in either interior or exterior airport operating environments in all weathers, the company asserts. All-weather operation is enabled by “weather-hardened sensors and innovative software processes” that allow the machine to operate in snow, heavy rain, direct sunlight and fog, Aurrigo notes.
Plus, Aurrigo’s sales director Miles Garner tells Airside that Auto-Dolly, with its powered roller deck, offers the unique ability to ‘crab’ sideways when docking and parallel parking, making the most of the available space in cramped and/or congested airport conditions.

Evolution
The design of the Auto-Dolly recently launched onto the market represents a significant evolution in the dolly that was tested at London Heathrow’s Terminal 5 with International Airlines Group (IAG) a couple of years ago (see https://www.airsideint.com/aurrigo-develops-worlds-first-self-driving-baggage-dolly/).

That model was a ‘proof of concept’, Garner recalls, and significant changes have been made to the unit’s design since then. These include: the development of a much lighter weight chassis design (the Auto-Dolly can be lighter than more traditional baggage and cargo dollies because traditional dollies have to be sufficiently robust to weather the bumps and crashes that they are expected to suffer); the introduction of a new battery power pack that is much more suited to an autonomous vehicle such as the Auto-Dolly and that offers up to 120 miles of operation on a single charge; and an improved Autonomous Control System (ACS) that has been custom-designed and made for the Auto-Dolly.

The Auto-Dolly’s ACS incorporates GPS, inertial measurement units, cameras and light detection and ranging (LIDAR) systems on an A-frame structure above the unit’s flat baggage/cargo platform area. They tell the Auto-Dolly where it is located on the pre-programmed mapped area of an airport stored in the Auto-Dolly’s memory, as well as giving it the awareness of its changing surroundings and alerting it to any obstacles or potential problems nearby.

Each of the Auto-Dollies communicates with a cloud-based Fleet Management System (FMS), which co-ordinates the optimal efficiency of the vehicle fleet. The FMS also controls vehicle platooning using software developed by Aurrigo, with communications based on Local Private Networks or via encrypted data over standard cellular communications technology, Garner informs.

The Auto-Dolly is ready for production and Aurrigo is currently talking to potential customers amongst handlers, airport authorities and logistics service providers, Garner continues. One airline that continues to show an interest is IAG, with which Aurrigo worked on the pilot at Heathrow.

Despite widespread optimism about the technology, the development of self-driving cars over recent years has not been smooth due to the complexities of autonomous driving on busy public roads. However, Garner feels the challenges for vehicles such as the Auto-Dolly that are expected to operate in airport environments – areas that are not limited in scale but are closed to the public, closely controlled and low-speed environments by their very nature – are much more manageable. As a result, uptake of autonomous vehicles in the aviation industry could be that much greater.

Furthermore, he points out, while the actual benefits of autonomous private cars are neither obvious nor particularly attractive to many drivers, the potential cost savings of the Auto-Dolly make it a very enticing proposition to possible users at airports around the world, Garner argues.

“We are really proud of the innovation of the Auto-Dolly,” he adds, concluding by saying that if demand for the unit was sufficient, Aurrigo could offer large numbers of Auto-Dollies by partnering with manufacturers it has already consulted.