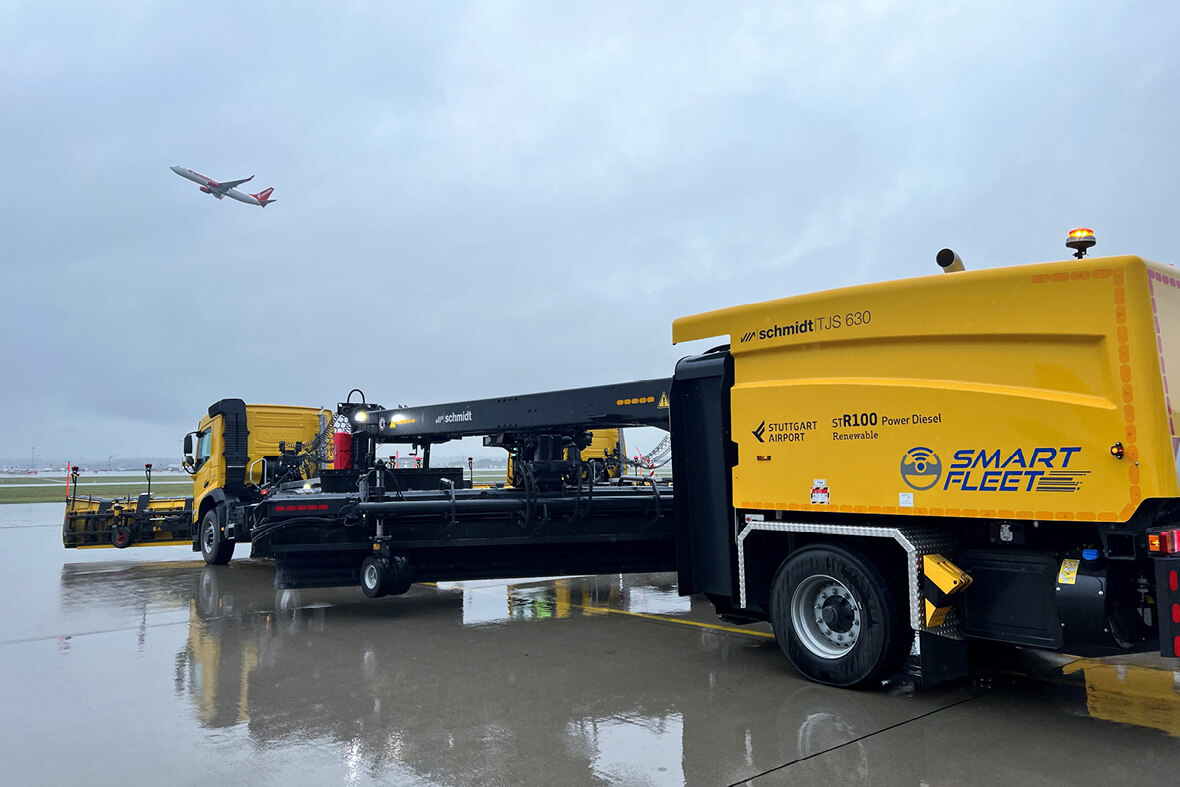 In late September, Stuttgart Airport and Zurich-based, municipal and airport equipment manufacturer Aebi Schmidt demonstrated the safe operation of two autonomous runway sweepers on the German gateway’s ramp.
The two autonomous TJC jet sweepers were operated autonomously in a simulated snow clearance operation; there were operators in the cabs, but they did not touch the drivers’ wheels. The two autonomously operated units were joined by a manually operated vehicle in a simulation both of the safe autonomous driving and navigation of the units as well as, simultaneously, of their sweeping equipment (though, given the time of year, there was of course no snow to clear).
The vehicles were equipped with Aebi Schmidt’s autonomous operations technology, and with the layout of Stuttgart Airport’s airfield environment programmed into their software and precise geolocation technology plotting their exact position on that apron at any given moment, they were able to drive and simulate snow clearance operations on pre-selected routes.
During the trials carried out on 21 September on the airport’s Zulu taxiway, testing of various functions took place, including driving along a specific route, interacting with other conventional winter maintenance equipment when driving in convoy, and using a snow plough, brush roller and blower according to predefined clearing methods.
The test was a culmination of many different trials of individual functions, and demonstrated just how the vehicles could work and operate simultaneously as an integrated package.
While the airport operator notes that individual components of winter service vehicles have been operated autonomously for some time, Aebi Schmidt has now succeeded in creating a fully integrated system. Notably, both truck and sweeper are controlled via the same platform.

High-tech
The autonomous vehicles can operate in all weathers, not an unhelpful function given their snow-clearing role. While they do not have anti-collision capability in the form of cameras, light detection and ranging (LIDAR) or similar technologies, they do not need it, explains Martin Hofmann, project lead for the SmartFleet intelligent GSE programme at Stuttgart Airport. The range of sophisticated geolocation systems that are used – more than just GPS – to calculate the vehicles’ position at any given moment combine to give a positional accuracy of within 2 to 3cm, he notes, while the ground plan of the areas around pre-assigned routes is meticulously mapped and programmed into the software.
Moreover, the ramp is a carefully controlled environment, and the zone in which the vehicles would be expected to operate would always be cleared of other equipment and personnel.
Finally, the bad weather in which the vehicles will regularly operate has its impact on such anti-collision technologies that are typically used for autonomous vehicles anyway. Hofmann points out.
There is still much to be achieved before the autonomous vehicles would go into live operation at Stuttgart. Further trials might be expected to take place at other gateways to assess their viability in different locations and for further feedback to be gained.
“Once the prototype phase is completed and the vehicles are available in regular series production, Stuttgart Airport is looking forward to increasing the level of automation in its winter fleet,” Hofmann confirms.

SmartFleet
The autonomous jet sweepers are just one part of Stuttgart Airport’s SmartFleet project, which is assessing the feasibility of ‘autonomous commercial vehicles for safe and efficient airport operations’ at the gateway.
Launched in 2019, besides Stuttgart Airport and Aebi Schmidt Germany, the consortium also includes Germany’s VOLK Fahrzeugbau GmbH, which is developing an autonomous luggage tractor. The prototype for that project is currently in the VOLK workshop, as it makes further fine-tunings to the unit. Further tests of the baggage tractor are going to take place at Stuttgart over the next two months, Hofmann confirms, principally in the airport’s airside baggage sorting facility. The autonomously operated vehicle has already undergone tests in a variety of operating environments, with trials in the baggage facility expected to be amongst the last to take place.
SmartFleet has been funded by the German Federal Ministry for Economic Affairs and Climate Action (formerly the German Federal Ministry for Economic Affairs and Energy) to the tune of approximately 3.9 million Euros (US$3.8 million), but the three-year programme comes to an end at the end of this year. Of course, that does not mean that development of autonomous vehicles at Aebi Schmidt or VOLK will come to an end; nor will Stuttgart Airport’s interest in these cutting-edge technologies.
It will be very interesting to see just when the first items of fully autonomous GSE do go live on the apron at Stuttgart Airport.

Aebi Schmidt: the potential for autonomy

When Stuttgart Airport operator Flughafen Stuttgart GmbH launched its SmartFleet project in 2019, the authority decided to co-operate with Aebi Schmidt and VOLK on the programme – but, of course, its focus was entirely on the specific requirements of its own airport.
Independently, however, Aebi Schmidt had already been working on technologies that enable autonomous airside operations since 2017.
Crucially, “Aebi Schmidt is convinced that there will never be an off-the-shelf autonomous equipment and operation concept [for all gateways], but that it is all about adapting the technology to the particular framework and conditions at any specific airport,” insists Thomas Schiess, head of group marketing at Aebi Schmidt.
“While we were able to present the first stage of our approach – our driver assistance system – to the market as early as 2020, in Stuttgart [at the recent trials] we were able to show the second stage for the first time, which includes the full integration of both the truck and sweeper,” he says.
Aebi Schmidt’s autonomous technology works independent of the manufacturer/brand, Schiess continues, “and enables an airport to have all its current and future vehicle and equipment fleets integrated autonomously, independent of the manufacturers”.
He adds: “The technology has been intensively tested and is now ready for effective application. [In September], the press and interested parties were able to see for themselves that the fleet operates autonomously on previously assigned routes. Due to current legislation and security concepts, we still had a driver in the truck cab – but hands-off und just for emergency scenarios. We could proudly demonstrate that the fleet and equipment runs autonomously.”
As for the future: “We are continuously developing our technologies. The next steps will largely depend on whether interested airports succeed in convincing their stakeholders of [the value of] autonomous operations.” A regulatory framework will also have to be put in place.
“In any case, the technology is ready and so is the interest of quite a few airports,” Schiess observes. “We have learned from decades of experience at airports that autonomous operations are not only more efficient and cost-effective, they also allow mission-control managers to react more flexibly to changing situations, thereby contributing to greater safety and lower emissions.”