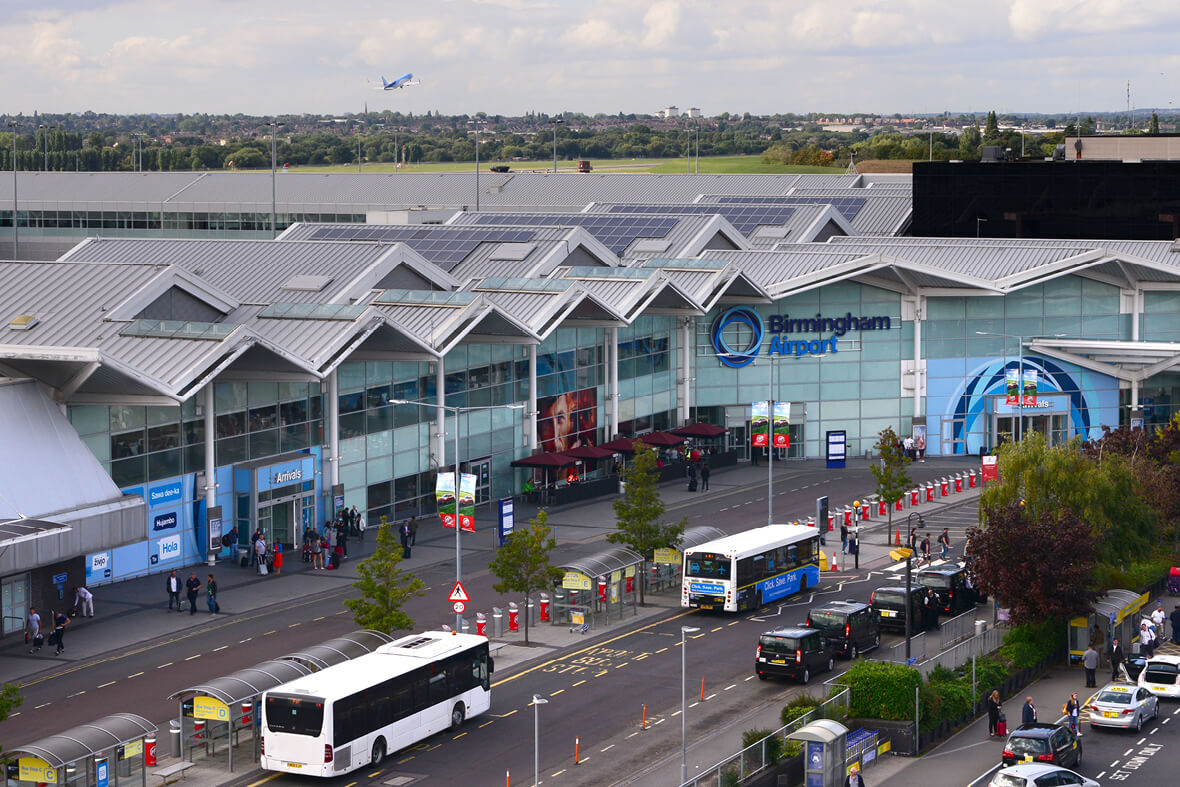 Birmingham Airport, the UK’s seventh-largest airport serving England’s second city and the surrounding region, has published a new roadmap for achieving net carbon-zero operations by 2033. Committed to minimising its environmental footprint, the gateway’s wide-ranging sustainability programme promises significant changes both landside and airside, building on progress made over the last decade

Birmingham Airport’s commitment to environmental sustainability is not new – in fact, it announced its ambition to move to zero-carbon operations in 2019. Now, despite the collapse in the aviation industry caused by the Covid pandemic, Birmingham has publicised a roadmap to success by 2033.
Birmingham Airport CEO Nick Barton observes: “Our Net Zero Carbon Plan sets out how we will become net zero by 2033 through investments in energy-saving initiatives and stakeholder partnerships over the next decade.
“Our investment to become net zero will escalate immediately with a multi-million pound outlay up to 2025, focusing on renewables and energy efficiencies. The second phase of investment will be developed to complete our net zero transition by 2033, with a focus on emerging technologies to create a low-carbon environment.
“While we have a good track record in achieving low-carbon operations, we know that meeting our net zero target will need more impactful and immediate action. Through innovation and partnership co-operation, we can make real change to [the] climate impact [of] our combined operations,” Barton adds.
Set aside is an initial multi-million pound commitment covering the next four years to reduce those emissions that the airport controls (known as Scope 1 and 2 emissions) by 60%. This is to be achieved through a programme of investment in renewable energy generation, energy-efficient lighting and energy management technology.
Up to 40% of the electricity used at the airport will be sourced through solar power, while the airport has already moved to 100% green tariff electricity. The airport’s heating and cooling infrastructure is also to be modified, including upgrades to building fabric and a gradual transition to low carbon alternatives.
Airside, the number of electric vehicle (EV) charging points will be increased from the 25 already in place to prepare for the expanding number of EVs that will access the airport’s ramp.

Building on progress
Tom Denton, Birmingham Airport’s head of sustainability, points out that these are just some of the changes that are to come, and that these improvements build on efforts already made over the last 10 years or so to reduce the gateway’s environmental footprint.
“Over the last decade we have been driving quite hard throughout the airport to reduce our Scope 1 and 2 emissions,” he says. Such projects as installing 50,000kW solar panels on the North Terminal roof have formed part of a concerted effort to upgrade infrastructure in order to introduce cleaner energy or minimise energy consumption. LED lighting is also to be introduced throughout airport buildings to lower energy consumption, for instance.
The changes are by no means confined to infrastructure and landside operations. Airside, the airport operator is working with partner airlines, handlers, terminal concessions, industry associations concerned with environmental good practice such as Sustainable Aviation, and even regulatory bodies as part of efforts to fulfil its sustainability goals.
One element of that is its Pathfinder programme, which is concerned with minimising fuel burnt by aircraft entering or leaving the airspace around the airport. Birmingham has collaborated with airlines using the gateway as well as NATS, the UK’s air traffic management services provider, on optimising the air lanes in this airspace and on facilitating the most efficient way to fly in this airspace – such as enabling continuous climb and descent operations as and where possible.
On the ground, too, Birmingham has looked to minimise fuel burn through more efficient taxi procedures. In particular, it has encouraged its carrier partners to adopt single-engine taxiing when possible, whether preparing for departure or subsequent to landing. This saves fuel and thereby lowers emissions levels, as well as entailing less noise.
Not all airlines have been 100% on board with this – there are challenges to the adoption of single-engine taxiing, such as the increased strain and wear it can put on the single engine used, especially where an uphill gradient on a taxiway might need to be navigated. But many airlines have been keen to look at this possibility, not surprising perhaps given the high costs of fuel that any airline must bear.
The fuel burn of diesel vehicles is also a focus for Birmingham Airport and additional charging points for electric vehicles will be installed, as previously mentioned. Birmingham Airport already operates 20 electric vehicles, six of which are electric buses that work the gateway’s car parks, bringing passengers to/from their terminal. The buses use an innovative pantograph charging system which delvers power at passenger pick-up/drop-off points, meaning the vehicles don’t need to be plugged in for everyday recharging.
These are landside buses, but the airport operator is also looking at the potential for battery-powered airside bussing, and indeed at the time of writing was involved in a trial of an electric airside bus.
The potential for the use of electric GSE on the apron is also being investigated and promoted. For example, at least one ITW GSE electric ground power unit (eGPU) is going to be put through its paces in a trial at the airport in the near future. The possible emission savings that could be achieved through the use of electric tugs and the like is also to be explored, Denton confirms.
Key to achieving these goals will be getting the buy-in of the airport’s partners and stakeholders. And, the vast majority of them seem to be onboard. As well as the airlines, airport tenants and so on, also vital will be the role of the airport’s ground service providers. Currently, Swissport and Up & Away Aviation Services ground handle at Birmingham, although a third party is expected to join them very soon (some airlines, such as Jet2, also self-handle at Birmingham). It is they who will, for example, operate any battery-powered GSE.
“They have been very amenable to what we are trying to achieve [with regard to sustainability], even though they are stretched,” says Denton. “They are very receptive and indeed proactive in supporting what the airport is trying to achieve.”

More to do
The measures that have already been put in place – the installation of solar panels, the introduction of energy-efficient procedures and the switch to EVs – have already facilitated a 33% reduction in those emissions that the airport can directly control. But there is much more to do.
Denton believes the 2033 net carbon-zero target is an ambitious challenge, but one that the airport is committed to.
And Barton comments: “When we launched the Sustainability Strategy in late 2019, never could we have imagined the catastrophic impact the pandemic would have on all our lives. While by no means unique, the impact on aviation has been severe and we have had to diversify and prioritise investments over the last few years.
“As we now see signs of recovery, I feel confident that we will meet net zero by 2033 and deliver on our sustainability strategy commitments in the coming years.”