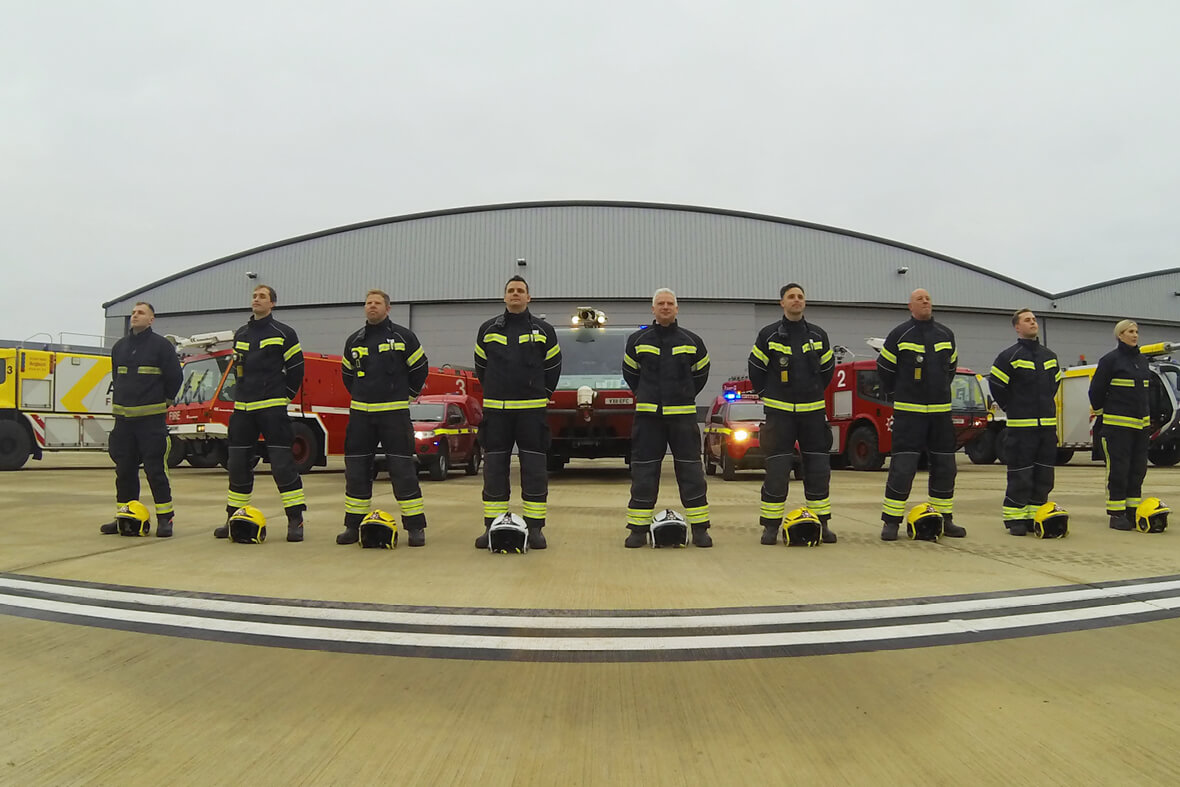 The UK’s fifth-busiest business aviation gateway, London Oxford Airport, has announced a significant enhancement of its rescue and firefighting capability. This represents just one example of how London Oxford is developing its capacity as operational intensity at the airport grows

London Oxford Airport, a privately owned airport located in Southeast England’s Thames Valley region, has invested in various lines of equipment to support an ongoing expansion in operations through the gateway.
Amongst the most expensive of the new equipment are new firefighting appliances. The bringing online of more capable vehicles made possible the recertification of the Rescue and Fire Fighting Services (RFFS) capability at London Oxford Airport by the UK’s Civil Aviation Authority (CAA) to Category 6 status, confirming that it can now safely handle much larger aircraft.
It is no small change. The requirements of the airport’s RFFS team changed considerably as a result of the move to Category 6. Richard Oakes, the gateway’s fire services manager, explains: “We now need over three times the amount of water on wheels and over twice as much foam discharge rate.
“Our new vehicles are fitted with technology and equipment that enables a more effective delivery of firefighting media. Plus, to ensure a consistent resource requirement to support the TRA [see panel for details] for Category 6, London Oxford Airport increased headcount with a successful recruitment at the end of 2021.”
The new appliances in which London Oxford has invested are three Angloco 6×6 vehicles. These allow a driver to operate the firefighting monitor from the cab and thus do away with the need for an individual to work aloft as a pump operator.
According to Oakes: “The firefighting delivery methods on the new fleet support an expeditious attack promoting survivability at an incident. These vehicles are built on a domestic Scania chassis that will support attending incidents within a 1,000m response [range].
“The appliances are currently in the final stages of construction. Angloco has supported our position by providing interim appliances that match the ability of the [vehicles that have been ordered]. We currently have a Rosenbauer Panther and a Carmichael HRET [high reach extendable turret] as our primary response [vehicles].”
All of the airport’s RFFS personnel underwent extensive training and competency assessments for these interim appliances before they were brought on line. And this process will be replicated with the Angloco vehicles.

Category 6: business as usual
London Oxford had previously been a Category 6 request airport, dependent on additional resource and vehicles being brought on line when required in order to handle larger aircraft. This was inconvenient for aircraft operator customers, who want uninhibited flexibility. It was also a hindrance to passing business aviation. The gateway can now consistently offer RFFS services to aircraft up to but not including 39m in length, with a maximum fuselage width of 5m. Category 6 is now “our business as usual”, says Oakes.
The newly enhanced firefighting capability as defined by Category 6 status is now available 24 hours a day, supporting in particular – as already noted – the larger business jets that now frequent the airport. A further advantage, especially for operators coming in with those larger business planes, is that the airport now represents viable alternative for weather-related (or other) diversions from elsewhere.
James Dillon-Godfray, the airport’s head of business development, observes: “This new assured Category 6 capability gives aircraft operators and flight planning organisations even greater confidence that access is assured for their larger aircraft types – all the time.”
And Will Curtis, London Oxford Airport’s managing director, adds: “This latest development is testament to our investment in and dedication to safety and service, particularly as movements in large cabin private jets at the airport continue to grow.”

Continuing growth
Last year, London Oxford Airport saw business jet movements through its facilities rise by 33% compared to 2020. In fact, the year represented the best performance for the gateway in the 15 years since the Reuben Brothers had acquired the airport from BBA Aviation.
Around 66,000 aircraft movements and 10,000 passengers were handled through the OxfordJet FBO (fixed base operator) at London Oxford last year. This figure compared with 46,000 aircraft movements in 2020 and 48,000 in 2019. Total aircraft movements were 57% up on the decade’s average and were up by 44% over 2020.
As well as the increase in business aviation operations through the gateway, there was also a significant resurgence in pilot training at London Oxford, where one of its new schools – Leading Edge Aviation – has grown from nothing to 200 students and 18 aircraft in the last two and a half years, despite the pandemic.
The pandemic itself has represented a significant boost to private aviation because people are choosing to fly in healthier bubbles and are not using larger airports. Moreover, the decimation of pre-pandemic commercial airline services and the much-restricted flight schedules that have been a feature of the last couple of years have also led some to choose to move to private aviation.
This has perhaps benefited London Oxford more than it has many other general aviation gateways. Certainly Dillon-Godfray believes: “With business aviation activity 38% up compared with pre-pandemic levels, London Oxford Airport is well positioned to support the prerequisite demand for leading bizjet operators for routine, no-hesitation access.”
London Oxford Airport is ideal for those looking to reach the north and west of London as well as the Thames Valley region. Moreover, Dillon-Godfray opines, “Our popularity as an alternative London airport is partly due to our excellent operating hours – available from 06:00hrs to midnight, seven days a week.”
The airport can handle regional airliner types such as the Embraer E195 with 100-plus seats on charters, Boeing BBJ (B737) and Airbus Corporate Jets ACJ320 series bizliners, and the new TwoTwenty (A220 derivative).

Facility development
The airport’s facilities were developed to support both the larger number of aircraft coming to London Oxford and the increased size of some of them. Most recently, November saw the opening of Hangar 15, a 63,000ft2 (6,000m2), 140m long structure, able to take up to six Bombardier Global or Gulfstream-sized aircraft. The new hangar was financed internally and was finished in October last year.
But much had been done previously to lay the foundation for the increased operational intensity of the airport. That included strengthening the runway to a PCN (pavement classification number) of 38, as well as improving new apron areas up to a similar strength. London Oxford also widened its runway to a Code 3C classification (at the same time as strengthening the runway, back in 2006). The apron areas were reinforced between 2006 and 2008, while a new apron area was also built around the new hangar opened last year.
As well as this latest hangar, other new hangars have been built over recent years. Plus, the airport has invested in higher capacity ground power units (GPUs), an air start unit (ASU), baggage conveyor and new tugs, all to cater for the larger aircraft types now using the airport. All this new GSE was brought in last year, most of it in the latter part of 2021.
Operating the new GSE is an expanded ground handling team. London Oxford performs all its own ground handling, and its handling team has grown by about 20% over the last 18 months. Meanwhile, “Retraining and recurrent training [of members of this team] is a constant” regardless of the size of the handling staff and the equipment they use, Dillon-Godfray confirms.
“As the airport evolves, we will continue to grow our capabilities to ensure we maintain our industry-leading standards across the board,” he advises, telling Airside: “I think the [traffic] levels that we saw increase during the pandemic will remain [steady] now – people have the appetite to stick with the joys of private aviation.
“In our specific case, with our new CAT 6 [RFSS] capability available all the time, we ought to see more of the larger jets coming in, especially in the spring to autumn months as a new London-region option that has that guaranteed capability.
“Likewise, our new hangar brings new aircraft residency and as such we should see more activity directly related to having more tenanted aircraft.”
Moreover, Dillon-Godfray is looking beyond business aviation for custom. “Although primarily focused on the business aviation sector in terms of these various capability enhancements, they open the doors to some more regional airliner charter operations and even potentially some scheduled activity.
“We are not proactively chasing airlines at all but the fact is that London Oxford now has exactly the same capabilities as some much larger ‘commercial’ regional airports hosting scheduled operations.
“Where we have no restrictions to host any form of commercial/scheduled, pay per passenger operations, some of our peers very specifically cannot host such flights under their planning constraints.
“Now, if a commercial airline flight with up to 70 passengers for instance can’t get in to its intended destination due to weather or some other crisis, we can be used as a diversion/alternate and we could readily cope with rescuing that flight on the ground with the capabilities, amenities and equipment we have,” he concludes.