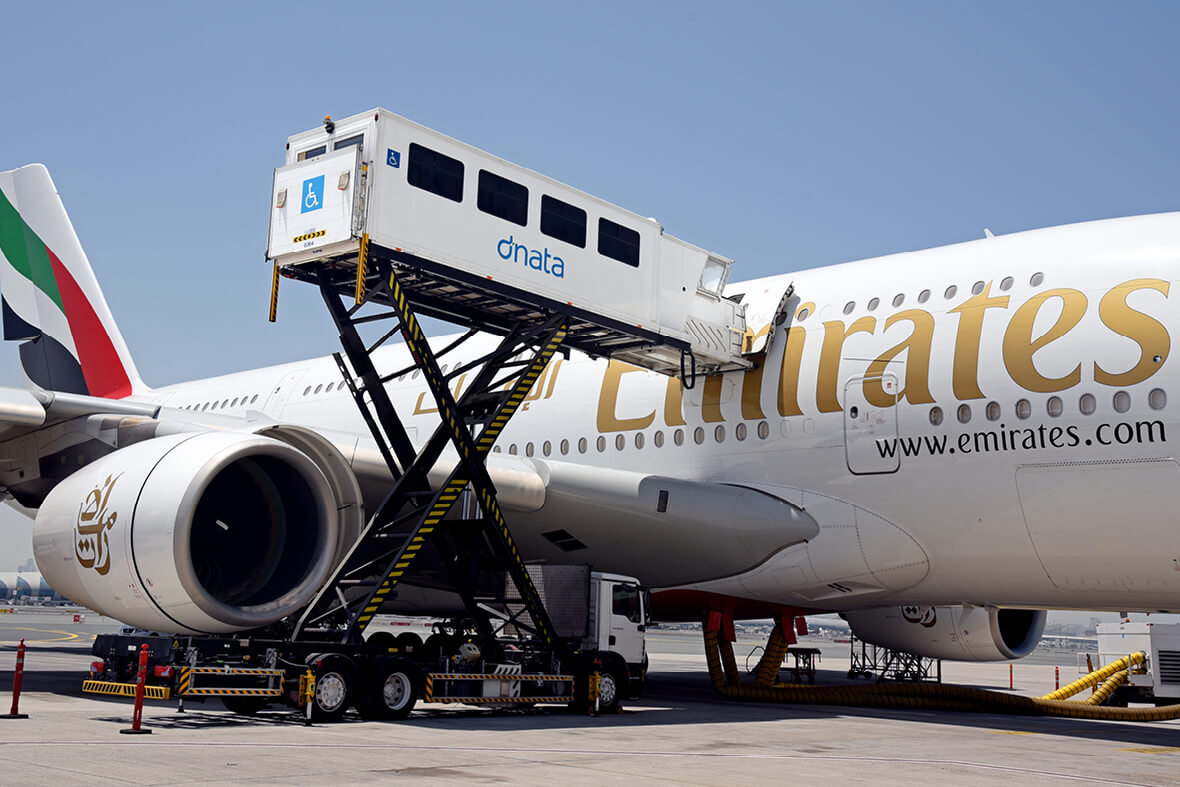 Complementing the medical lift feature of earlier in this issue, Airside talks to air service provider dnata about its provision of ambulifts and other equipment and services that assist its regular passengers with restricted mobility (PRMs)

Robert Powell, dnata’s vice president for technical services, and GSE planning manager Bartu Korgul tell Airside that the handler – part of the Dubai-headquartered Emirates Group – places a high priority on PRMs and the equipment that it uses to support them.

At the core of dnata’s Dubai service offering for people of determination are its 28 medical lifts. These are mainly Mallaghan models but also include DOLL ambulifts for serving A380 super jumbos and some DENGE medical lifts in use at Dubai World Central (DWC).

Due to changing operational intensity in flight operations, some of these DENGE lifts are going to be repositioned in Pakistan to support dnata operations there.

The most recent acquisition of ambulifts by dnata in Dubai involved five Mallaghan ML4000T truck-mounted medical lifts purchased by the handler in 2019. These units are now in operation at Terminal 2 at Dubai International Airport (DXB), primarily serving flydubai and other narrowbody customer airlines.

dnata’s international operations beyond Dubai involve a total of nine medical lifts across six stations elsewhere in the Middle East and in Asia, Korgul informs. There are plans for new medical lifts to be acquired at some point in the future, he advises: replacement units for older models that will offer higher technical specifications.

On that subject, Korgul notes that the handler makes acquisition decisions against a range of both technical and commercial criteria. Requirements vary widely, and depend on the nature of the station involved (station size, airport layout and the positioning of gates, for example); on the aircraft that need to be served (the range of aircraft types will determine the heights that need to be reached and the level of flexibility required: whether the vehicles should be half-cab or full-cab, self-propelled or truck-mounted, and so on); and on the number of PRMs/people of determination who will be handled.
Other factors that have to come into consideration when making acquisition decisions include dnata’s determination to keep up with all international requirements and recommended standards, from bodies including but not limited to the European Union (EU), the International Organization for Standardization (ISO) and the International Air Transport Association (IATA); that the medical lifts incorporate the latest in technological safety measures to minimise risks of aircraft collision; and that any new equipment meets the needs of dnata’s corporate strategy to standardise its GSE technical specifications as and when possible.

Delivery lead times from a supplier may also be a consideration. Finally, while dnata is sensitive to price, it is “very sensitive to the particular needs of PRMs/people of determination”, Powell says.

Powell emphasis Korgul’s thoughts on the importance of the range of factors that have to be considered when acquiring medical lifts. As part of its strategy of standardisation of equipment types, dnata offers stations looking to acquire new GSE a range of options – a “menu”, he says – of options against which they can make their purchasing decisions, all within the context of a transparent and fair tender process.
Each acquisition of new medical lifts needs to be very carefully considered, he says, given that the requirements of each station can differ dramatically. Flexibility might be very important at some stations, more so than at others, for example. At the end of the day, though, “At dnata we fully focus on the needs of our customers and the quality of our equipment reflects our standing on this.”

Medical lifts are not the only evidence of dnata’s focus on PRMs. For example, it has no less than 600 wheelchairs of various types available across the four terminals of Dubai’s two airports (DWC and DXB). Each is inspected and sanitised before use in these Covid-19-affected times, as are the ambulifts and passenger buses that its people of determination might use.

All the passenger buses that dnata has acquired over the last couple of years for use in Dubai have wheelchair ramps and tie-down points for wheelchair restraints, and dnata attendants are available for PRMs even when dnata’s full ambulift service is not required.

For the future, dnata is considering further improvements to its capability to handle PRMs in Dubai. Acquiring Aviramp passenger boarding platforms that are easier for PRMs than passenger steps is one option under consideration for its DWC operation; another is a transport ambulance service for airport transfers.