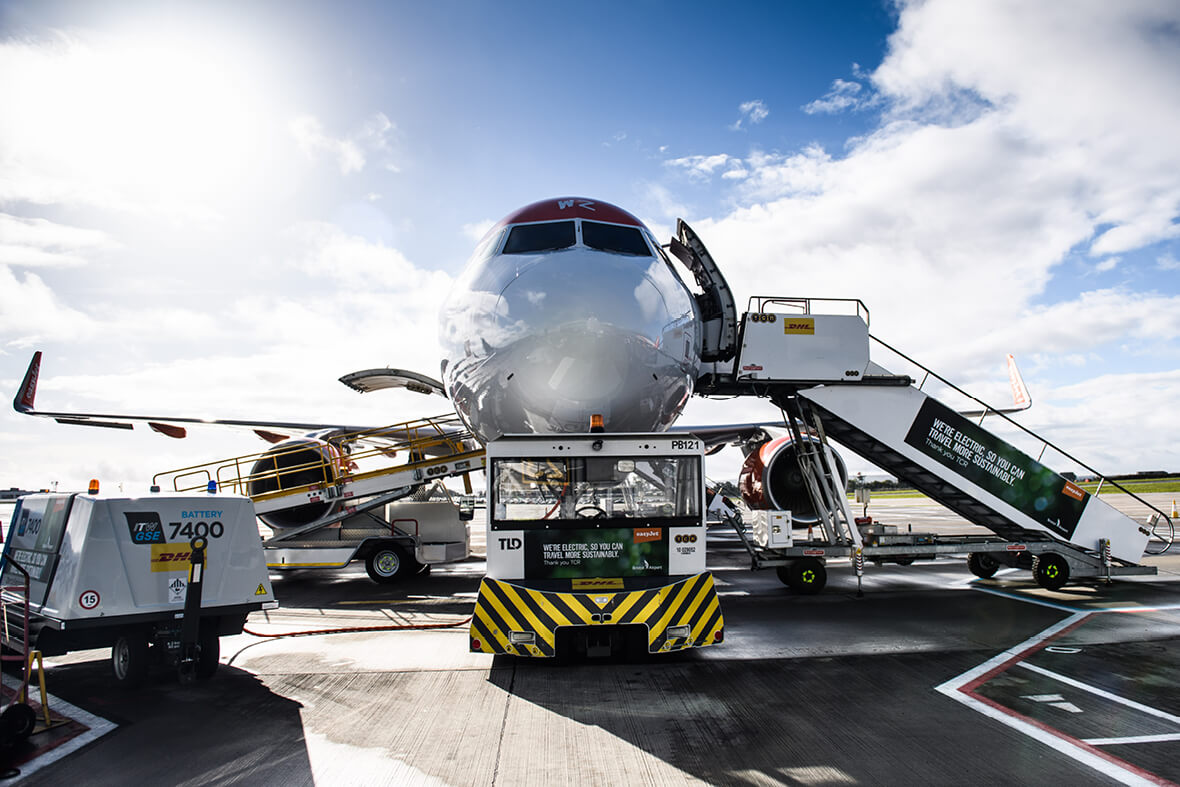 Bristol Airport, the southwest of England air gateway, is hosting a six-month trial of virtually emissions-free turnarounds of some easyJet aircraft. Already well underway, the trials are generating a lot of interest from other airlines and from GSE suppliers as to how all-electric GSE can be operated to facilitate the aviation industry’s move towards a more sustainable future

In August last year, Bristol Airport confirmed that it had entered into a collaborative agreement with easyJet that would involve a number of trials to support joint efforts to achieve greater sustainability in their operations. The partnership is expected to include collaboration on possible improvements in four main areas: ramp operations, flight operations, cabin services and engineering.
Specifically, areas of collaboration are expected to include sustainable aviation fuel (SAF); electric passenger bus transportation; recycling and waste management; aircraft continuous descent approaches; employee carbon-saving initiatives; Airbus NEO aircraft deploymen and fleet optimisation; and supply chain carbon initiatives.
The showpiece of the collaboration is the ongoing effort to achieve carbon emissions as near to zero as possible on easyJet turnarounds at two Bristol Airport stands over a six-month period, an effort that commenced on 1 September.
Samantha Clark, easyJet’s senior management airport development – whose responsibilities include helping to oversee the carrier’s forward-looking innovation in partnership with airports – explains that this collaboration with Bristol Airport is a reflection of the airline’s wide-ranging strategy on minimising harmful emissions.
As an airline, easyJet hopes to lead the way on zero-emissions flight operations, and is committed to achieving net-zero emissions flying by 2050. In 2019 it launched a new Sustainability Strategy and, it notes, became the first carrier worldwide to offset all its direct carbon emissions (according to scopes 1 and 2).
The pandemic has hit easyJet operations since then, as it has all passenger carriers, but the airline has taken the opportunity, Clark reports, to “look at all our touchpoints to see how we can further lower our emissions footprint”.
While easyJet stations aircraft at no less than 28 airports and flies to more than 150 gateways across 35 countries, Bristol is one of its biggest and most important bases. In 2019, pre-pandemic, it had 16 aircraft operating from Bristol, plus a spare; in the same year, it operated a total of 33,718 arrivals and departures at the gateway. This close relationship alongside Bristol Airport’s avowed commitment to its own more sustainable future, made the gateway a good choice for battery-powered GSE turnaround trials, Clark explains.
Between eight and 10 items of electric GSE are being used during these trials at the two stands (although there is only sufficient equipment available for one turnaround at a time to take place on either one of the two stands). This equipment has primarily been provided by Belgium-based GSE supplier TCR, and includes battery-powered passenger steps, baggage tractors, belt loaders and a TPX-100-E pushback.
Plus, ITW GSE has provided a battery-powered 7400 eGPU (electric ground power unit), while Vestergaard has supplied an electrically powered water servicing unit.
Other partners in the project include easyJet’s handler at Bristol, DHL, as well as cleaning services provider Up and Away Aviation and GSE supplier Terberg (Vestergaard’s distributor in the UK).
The only two items of GSE being used up to the time of writing (November) that are not battery-powered have been the fuelling bowser and ambulift, and steps are being taken to address even these shortfalls in the all-electric ambition. A battery-powered ambulift is expected to arrive in Bristol fresh off the production line from Italian ambulift specialist Bulmor in January 2022, while there are hopes that even the refuelling aspect of the turnaround can become emissions-free in the near future. An electric de-icer might also be sourced for forthcoming winter operations.
“This is a first of its kind and very exciting,” says Clark of the six-month trial. “We are leading the way for UK airlines on this to show what can be achieved.”

Bristol’s green credentials
Bristol Airport has its own focus on improving the aviation industry’s sustainability. The gateway has set itself the mission of being the UK’s most sustainable regional airport and it has a very strong corporate initiative as regards sustainability: its Carbon Roadmap strategy sets out how Bristol Airport is to become a net zero airport by 2030, and that by the end of 2021 it will have reduced or offset all the carbon emissions under its direct control.
This focus on sustainability is fully backed by the airport operator’s shareholders, notes Rob O’Dare, airfield technical and compliance manager there. They, then, must be delighted that the emissions-minimising trials underway on those two stands at Bristol have so far achieved – per turnaround – between 86% and (if there is no need for a diesel-powered fuelling or any ambulift passengers on a turnaround) a full 100% reduction in carbon emissions.
These figures are impressive but, says Clark, there was actually no need for huge amounts of preparation in the run-up to these trials. All the battery-powered GSE was sourced and all the required training of easyJet’s DHL ground handling staff was achieved between just July and 1 September this year, when the trials began.
Of course, “It takes everyone pulling together,” O’Dare adds. His thoughts are echoed by Bristol Airport’s CEO, David Lees, who declares: “This is an outstanding achievement by all concerned. This is another demonstration of how [by] working together, including [with] partners and experts in their field, we are able to crate a positive reduction in carbon emissions today.”
And, “It needs a good group to make the collaboration work,” Clark agrees.

Going above and beyond
There were some initial hiccups in the trials, but they were largely unrelated to the fact that the GSE involved was battery-powered, rather because it was different to that which had been used previously. It was necessary to recalibrate the passenger steps, for example, and to speed up the belt loader, but these small issues were quickly resolved.
The DHL handlers involved have been “tremendous… going above and beyond”, says Clark. DHL already had some experience of handling easyJet turnarounds with battery-powered GSE at London Gatwick, so the airline was confident in its ability to do so at Bristol, and this confidence was well founded, she observes.
Of course, moving to all-electric GSE on a long-term basis does bring its challenges. One might be the initial acquisition price of battery-powered equipment, which can be higher than that of diesel powered units – a cost that is likely to be passed on to airline customers such as easyJet.
Another is the availability of battery charging infrastructure at airports. Bristol has invested in new charging infrastructure – including adapting fixed ground on-stand power infrastructure to enable recharging of battery-powered GSE. And the airport operator intends to do more to further support the shift towards electric GSE operations going forward, O’Dare confirms.
Bristol is also considering what might be achieved by GSE pooling, and in the course of such a move it would examine how any shared pool of battery-powered equipment could be easily and quickly charged to support ongoing greener ramp operations.

Green potential
O’Dare reports that over the course of a single month near the beginning of the trials process (specifically, 13 September to 13 October 2021) there was a 97% reduction in carbon emissions on those battery-powered turnarounds compared to what would be expected from comparable diesel-powered equipment.
That equates, he says, to a 1,780kg reduction in carbon dioxide emissions – approximately the equivalent of two full hot air balloons filled with CO2. The electric GSE had run for a total of 1,787 hours over the course of that month, using only 203kWh of power and generating just 59kg of CO2.
If these figures were to apply right across the airport’s operations, the potential benefits to the environment would be very significant. Likewise, if easyJet can encourage the use of purely electric GSE on turnarounds across its whole network, as it would certainly like to do, there is huge potential for emissions saving to be made there.
As Johan Lundgren, CEO of easyJet points out: “The learnings from the Bristol trial will help us shape our sustainability strategy for future operational changes – all of which will help enable easyJet’s transition towards our goal of net zero emissions by 2050.”
No surprise then, says O’Dare, that “There has been amazing interest in these trials from other airports and other elements of the ramp handling sector.”
Government has also shown its interest and enthusiasm for the efforts easyJet, Bristol Airport and their various partners. Two senior UK Department for Transport officials have been to see the trials for themselves (in late October), as has aviation, maritime & security minister Robert Courts.
“This is a world first,” Clark concludes. While there have certainly been other examples of all-electric GSE turnarounds (such as one conducted in Dubai in December 2019 by dnata for a flyDubai aircraft), there have been none of this sort of duration and intensity. The example is there for those who are seeking to ‘go green’ on aircraft turnarounds.