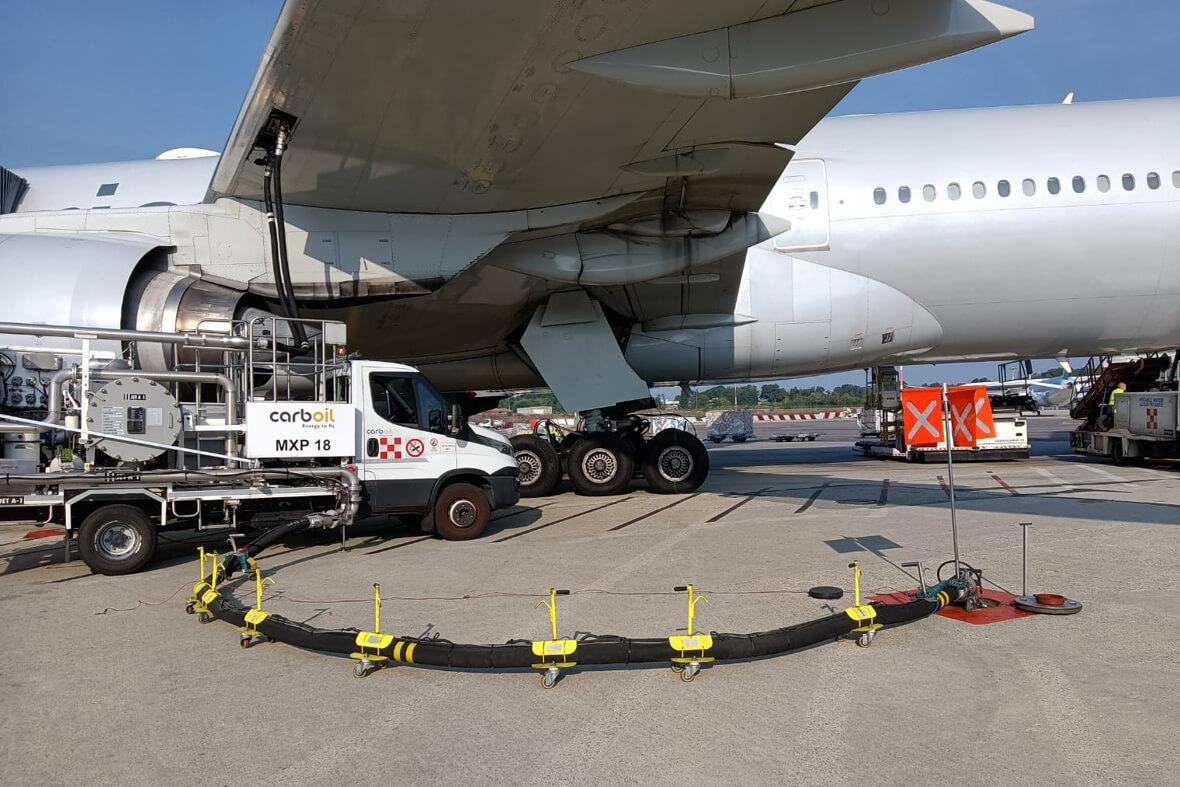 Elaflex’s latest improvements include the VHD WearAdvice®, an aircraft refuelling hose that includes a coloured wear indicator, as well as neon marking on the hose surface, as recommended by EI Standard 1529. VHD WearAdvice® was launched late last year at inter airport Europe in Munich.
The Energy Institute’s EI Standard 1529, which pertains to aviation fuelling and hose assemblies, states: “The outer casing of the hose should contain spiral stripes to identify the type of hose and brightly coloured stripes to aid location and identification at night. A coloured wear indicator may also be included beneath the cover.”
Elaflex’s aircraft refuelling hoses take in its HD-C hose with two textile braids, and its VHD-C hoses with three textile braids. The new WearAdvice® orange-coloured wear indicator is now standard with Elaflex’s VHD 38, VHD 50 and VHD 63 hoses.
Also new are BD hose beads that enable easier hose handling. The beads have a simple design, being put into place with just two clamps and employing neither bolts nor nuts. Elaflex says they are hard to break but also easy to put in place or take off.
Hose beads are often fitted to reel or deck hoses of aircraft refuelling vehicles. They are used to allow a hose to glide easily along an airport apron, thereby minimising abrasion on the hose and enhance visibility of the hose during refuelling.
Elaflex’s BD hose beads are specifically designed for the aviation market and can be fitted to its DN 38, 50 and 63 aircraft refuelling hoses.
Another new product is Elaflex’s hose trolley, which is designed to facilitate easy handling of intake hose assemblies (of DN 100/4 inch) on fuel dispensers, as well as to increase their longevity.
The company’s HTR-AF hose trolley comes in two materials – aluminium or steel (either carbon or stainless), brightly coloured for the sake of visibility and safety. The trolley has two rubberised freely rotating wheels intended for heavy-duty, intensive use on the apron. A fixed or swivelling handle can be fitted.
Plus, Elaflex now offers a new expansion joint in its ERV range of joints. Its ERV-G AF expansion joint designed specifically for piping systems for aviation refuelling dispensing vehicles is available for 50-200mm DN equipment and is the first expansion joint to feature a rubber compound that complies with the limit values for fuel-soluble matter, fuel contamination and fuel discolouration set out in EN ISO 1825 and EI 1529.
Like the VHD WearAdvice® aircraft refuelling hose, the ERV-G AF rubber expansion joint was launched at inter airport Europe in November last year.
Elaflex’s rubber expansion joints are used to reduce vibration and noise, to compensate for movements and assembly inaccuracies, and as pipe insert pieces to facilitate inspections.
According to Elaflex, “Our ‘ERV’ expansion joints are distinguished by a large axial, lateral and angular range of allowable movements, low reaction forces and low inherent resistance. They are perfect noise dampers and ideally qualified to reduce vibrations – the major part of the piping’s structure-borne noise and the low-frequency noise generated by fluids is eliminated.”
Furthermore: “Due to swivelling flanges and smooth bolt holes assembly is easy. A high burst pressure, integrated sealing surfaces with a wire core and a premium quality production are advantages which ensure a long service life.”

Safety in mind
According to André Bilgenroth, director of Elaflex’s aircraft refuelling business unit, all aircraft refuelling equipment must come with “a high level of safety, not only on the airfield itself, but across the entire transport chain. We are globally known as a leading system supplier of safe and innovative aircraft refuelling equipment.”
At Elaflex: “Quality and safety are always our top priorities,” he asserts.
This emphasis on safety was very much in mind when it came to the design and development of these new products. Thus, for example, Bilgenroth recalls: “We decided to improve our hose accessories. Most of the accessories available in the market have up to now not been specifically developed for use on airfields.
“Our BD hose beads fulfil the stringent requirements of the EI 1522 standard (which was reissued in May 2021) in terms of flame resistance, being highly break resistant (even at low temperatures) and furthermore, they do not contain any bolts and nuts due to the ‘Click-Fix Design’, allowing an easy assembling and disassembling as required by the JIG six-month inspection.”
He continues: “Our VHD aircraft refuelling hose is well known in the market but we have now added a further safety feature to follow the recommendations of EI 1529. The new type VHD WearAdvice® clearly shows the wear limit of hose abrasion to increase safety on airfields.”
All these newly launched products are unique in the market, Bilgenroth confirms. They add to the wide-ranging product range that Elaflex offers; in fact, it has “one of the widest product portfolios in the aviation refuelling industry”, he says.
Alongside that premium on safety, Elaflex’s products are well known for their reliability and durability. Moreover, “We ensure compatibility and the possibility to combine complex and special customer design requirements, all conforming to the latest aviation standards,” Bilgenroth declares.
“Due both to our own local personal knowledge and the close relationship we have with our customers, we are able to understand market issues, to develop appropriate products and to provide solutions to problems.”