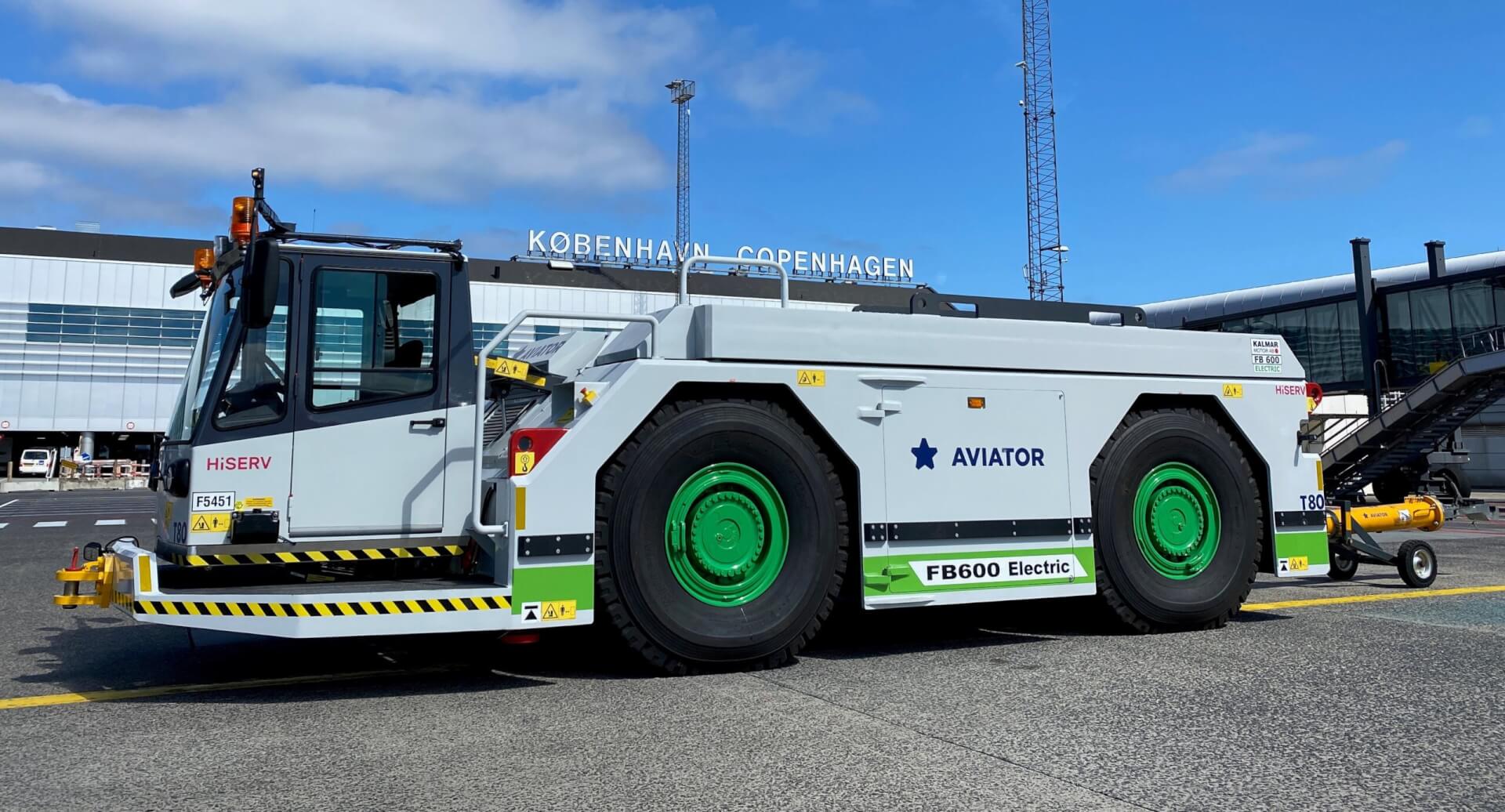 Kalmar Motor is a specialist in electric and hybrid tugs and is one of those at the forefront of the move towards greener GSE.

While the GSE manufacturing sector has been hit hard by the pandemic this year, Kalmar was in the fortunate position of having a very good pre-Covid order book that should keep it busy right throughout 2020, says the company’s technical sales manager, Sean Bryan.

With some production rescheduling to compensate for some delays in component deliveries, the company has continued to manufacture pretty much as it would in a normal year, although some tractor deliveries have been pushed back, whether as a result of customer request, or because shipping options have been drastically cut back, or because import procedures have been rigorously tightened in some places.

Kalmar Motor has benefited from being based in Sweden, as the Swedish Government has taken a slightly less stringent approach to combating the pandemic than most other countries. The company has been able to operate within the controlled working and social distancing guidelines laid out by the government, Bryan notes.

Future orders have been affected, but Kalmar Motor is hopeful of a return to normal once the pandemic is no longer with us; and anyway, that pre-existing order book would keep Kalmar busy into next year at least, Bryan suggests.

After-sales technical support has continued during the Covid-19 crisis. There has been less demand for it – handlers have cut back on their operations as a result of having far fewer aircraft to handle – but nevertheless, Kalmar Motor has maintained the level of its support either at the customer’s place of work or, more usually, remotely via video calls or the like.

Many deliveries have also gone ahead despite the pandemic. For example, mid-summer saw the company deliver a 60-ton FB600EL electric conventional tractor to ground services provider Aviator in Copenhagen through HiSERV, and a TBL800E electric towbarless tractor to dnata in Dubai. In addition, some new orders have been taken, with more than a dozen orders placed over the spring and early summer months that were so impacted by Covid-19.

What was very noticeable, says Bryan, was that without exception all those orders were for electric pushbacks. “It appears that customers are committed to electric,” he says, an ongoing trend that has not been affected by the virus or the resulting partial collapse of the aviation industry.
Fuel cells: the future?
Germany’s MULAG tow tractors are a common sight at airports around the world, and Airside International has reported previously on the innovative work that the Oppenau-headquartered company has done with its Comet 4FC fuel cell-powered baggage tractor (see, for example, https://www.airsideint.com/issue-article/plug-power-works-with-mulag-on-hydrogen-fuel-cell-power/).

According to marketing manager Oliver Kesy, MULAG’s new and improved hydrogen fuel cell tractor, the Comet 4FC, now boasts a larger and more powerful fuel cell. Its predecessor was successfully tested at Hamburg Airport last year, but the latest version comes with a whole range of other improved features. These include:

MULAG had a good year in 2019, enjoying growth in its tow tractor-related revenue – which softened the blow of this year’s downturn. Moreover, “It has certainly helped to have new state-of-the-art vehicles like the new Comet models unveiled at inter airport Europe 2019 in Munich,” says Kesy. “Of course the Covid-19 crisis has slowed down business considerably, but we are hopeful for 2021.”

He believes that, with regard to the ever-changing requirements for greener GSE power technologies, electric drive is “definitely a trend, although high-tech diesel engines are still dominating the market due to the cost for airports of setting up a proper charging infrastructure to handle peak power demands”.

Another advantage of diesel drives is that they still offer better performance over long distances and operating times which call for rapid refuelling, Kesy posits. However, “Hydrogen fuel cells will become an alternative as well and are already being taken into account when airports think about their future setup possibilities,” he adds.

As for MULAG’s immediate future, ongoing changes to its range of baggage and cargo tractors are being made. These include additional safety features and digitalisation, as well as engine updates and the development of new types with more powerful specifications, Kesy confirms.

‘Differentiated’ offerings
Parthenay, France-based SOVAM designs and manufactures a range of GSE that includes passenger steps, maintenance platforms, loaders, lavatory and other service units, as well as baggage tugs and pushback tractors.
The company has had a busy few years, a period involving its acquisition in 2017 by a privately owned company registered and located in Ireland, Abbey International Finance, and an ongoing process of moving the company towards profitability and what Abbey has described as a “sustainable future”.

Like MULAG, SOVAM enjoyed “good results” last year, which it achieved on the back of a corporate strategy that featured such priorities as:

Offering “a selective product portfolio”
Providing reliable, robust and user-friendly self-propelled vehicles on custom-built chassis that comply with ISO 9001
Addressing market demand with a “differentiated alternative” for large-volume GSE vehicles like tractors, passenger stairs and service vehicles while “asserting [its] leadership” in highly engineered equipment such as maintenance platforms and military products

When it comes to its own manufacturing strategy, SOVAM has focused on three pillars:

When Alain Péru took over as managing director of SOVAM in March 2019 (he had actually previously worked for the company, left and subsequently rejoined in spring last year), this corporate strategy was already in place – but of course, he also identified changes that he felt were necessary.

Not all of those changes could be made straight away, however, and he continued to focus on the previously set priorities, having to leave other ideas, such as new products that he wants to introduce, for later. Not that SOVAM’s large R&D department has been idle, focusing on improvements to the company’s wide-ranging existing product lines.

Amongst its range of pushbacks, its diesel-powered K40 has proved most popular of late, the company confirms. With a 40-ton towing capacity, it has been particularly in demand with African and Middle Eastern customers due to its robustness, reliability, ease of use and maintainability, SOVAM asserts.

Like Kalmar, SOVAM too is seeing the increasing demand for electric pushback options, particularly in the US and Europe – and the current pandemic will make demand for greener energy increase even further, Péru says. Today, SOVAM offers only diesel versions; if it does decide to develop an electric tug or tractor, it is likely to be as a supplement to one of its larger pushbacks, he confirms.

While not yet offering a battery-powered pushback, SOVAM is minimising the environmental footprint of its diesel tractors. Thus, for example, it is currently introducing new stage V engines for its 22-tonne to 40-tonne pushbacks (while one for the 60-tonne tractor is “coming soon”). SOVAM also offers electric versions of other product lines, such as some of its maintenance platform range.

Moreover, the company has made other improvements in terms of environmental sustainability in recent times, such as:

Improving engine component accessibility – to filters, belts and the like – for easier and faster maintenance
Enabling easier access to fuses and the diagnosis tool inside the driver’s cab
Introducing silicon hoses where possible for improved temperature resistance and to reduce risk of burns to the operator/driver
Introducing aviation type brake hoses (which suffer less thermal expansion and wear)
Introducing disc brakes front and rear for better braking performance

The Covid-19 pandemic has only encouraged Péru to think even bigger and to reconsider each and every possible option for growing the business, he says. Entirely new products will be developed and added to the current lines in time, he adds, perhaps including a return to the production of catering service vehicles as it did in the past.