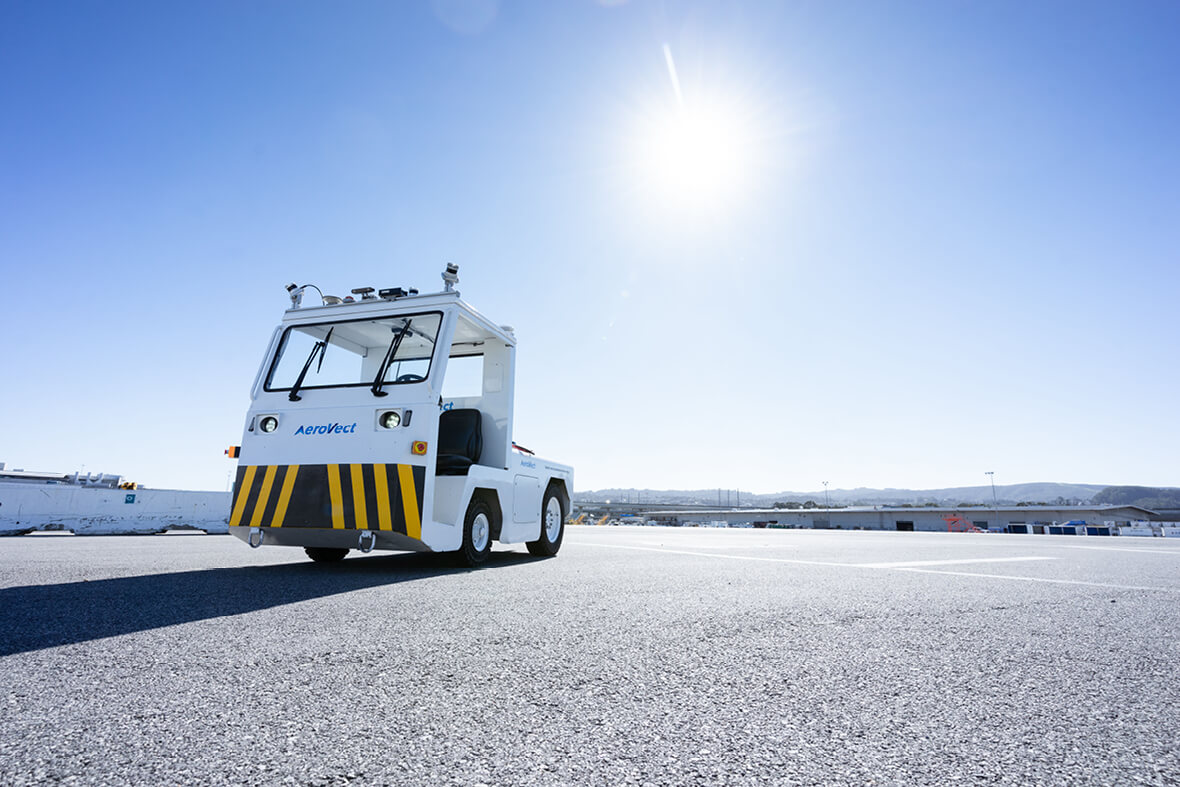 GAT Airline Ground Support, a ground, passenger and cargo handler operating at 72 locations across the US and Canada, is teaming up with San Francisco Bay Area-based AeroVect, a developer of autonomous technology for the airport handling industry

The two businesses describe their collaboration as a “strategic long-term partnership” with the goal of deploying self-driving GSE across some of GAT’s biggest stations in the US.
A joint statement says: “This groundbreaking partnership between a national ground support provider and autonomous driving company for airport logistics is the very first of its kind in the United States.”
The first phase of the partnership will see a cargo tow tractor driven by AeroVect Driver, self-driving technology that was developed specifically for the aviation industry, on behalf of GAT on the apron at one if its US stations (which is as yet unconfirmed). AeroVect Driver can be used across different GSE models built by different manufacturers, although at the moment the focus is on baggage and cargo tractors.
Subsequently, over the next few years, the aim is to deploy as many as 50 vehicles equipped with AeroVect at GAT stations.
The partners stress the value of autonomous driving GSE technology that facilitates “superior safety, productivity, and cost efficiency in ground handling”.
“We are enthusiastic that GAT shares our long-term, forward-thinking mindset to deliver next-generation ground support infrastructure across America through technology,” says Raymond Wang, co-founder and CEO of AeroVect.
“This key partnership represents an important milestone in the implementation of autonomous vehicles at scale to make ground operations more reliable and predictable, with safety and on-time performance benefits that also roll up to airlines, shippers, and travellers alike,” Wang notes.
Eugenio Donati, co-founder and chief operating officer of AeroVect, adds: “As an autonomy technology company built from the ground up specifically to serve airport logistics, we are thrilled that the team at GAT Airline Ground Support shares our unwavering focus and commitment to the global aviation industry.
“GAT shares our vision of creating an autonomous future where ground handling operations are safer, more reliable, and dramatically more productive – we look forward to jointly bringing autonomous GSE to the largest airports in America.”
Mike Hough, CEO of GAT, comments: “AeroVect’s autonomous GSE technology is not only useful and practical, but importantly a big step forward that enhances ramp safety.
“GAT Airline Ground Support has always been a first mover in the ground support industry, and we continue to invest in new frontier technologies that enable us to offer the safest, most efficient, and most reliable ground support service to our airline partners across major airports in the United States.”

Burgeoning collaboration
Hough tells Airside that GAT began working with AeroVect a little more than a year ago. “I had run across a brief post of their research on LinkedIn and reached out to their two founders to discuss how we could partner on bringing the technology to the market,” he recalls.
“As they improved the accuracy of their technology, we worked with local airport authorities and others to gain approval to operate the pilot.”
The primary pilot programme involving the two partners will see an AeroVect Driver-equipped baggage tractor used to move bags from airport bagroom to aircraft and from offload to customer retrieval belts, he confirms.
“We have not yet decided on locations for the deployment,” he continues. “Much will depend on airport approvals. We think the broad majority of deployments will see similar use to our testing plan at SFO [San Francisco International Airport] but also think there are potential applications for belt loaders, tractor routes to and from cargo warehouses, and possibly even catering and fleet service high lift trucks.”
To prepare for a deployment, wherever it might be, AeroVect engineers visit the site and undertake three-dimensional mapping of the space. That space is mapped into the unit, which is equipped with cameras and sensors that leverage all of the inputs and pair them with machine learning and artificial intelligence to enable the unit to navigate around the area and avoid any potential collisions.
“This is very similar to the technology being deployed by big box retailers on their floor scrubbers,” says Hough. “They used to have to do the work overnight with human-driven scrubbers. They now use a similar technology to operate the units at various points of the day, even while full of customers, and without a human driver. They can do this safely and without risking injury as they avoid darting children and busy shoppers.”
The partners are to spend three months testing the technology. The pilot unit will be manned by an AeroVect-trained driver at all times. He/she will have the ability to override the system in the event something does not go as planned. “During this period we will run many simulations and undertake real situation deployments to test all aspects of the system,” Hough informs.
And the benefits of autonomous driving technology? “The value to GAT will be the ability to improve quality and reduce the rushing around an airplane. Today, a typical narrowbody operation requires four team members plane-side. One of those team members peels off from the crew to deliver inbound bags while the remaining crew completes the upload process.
“With this autonomous technology, the driverless tractor will be able to do that bag delivery. Instead of waiting for all bins to download, several driverless vehicles could deliver each bin one at a time, which would dramatically decrease the time it takes to get bags to bag claim after arrival.
“Lastly, the vehicles will not be prone to human error (over-speeding, hard cornering, failure to stop at junction points, etc) and any time we can reduce time behind the wheel of vehicles, we greatly decrease the likelihood of team member injuries,” Hough concludes.