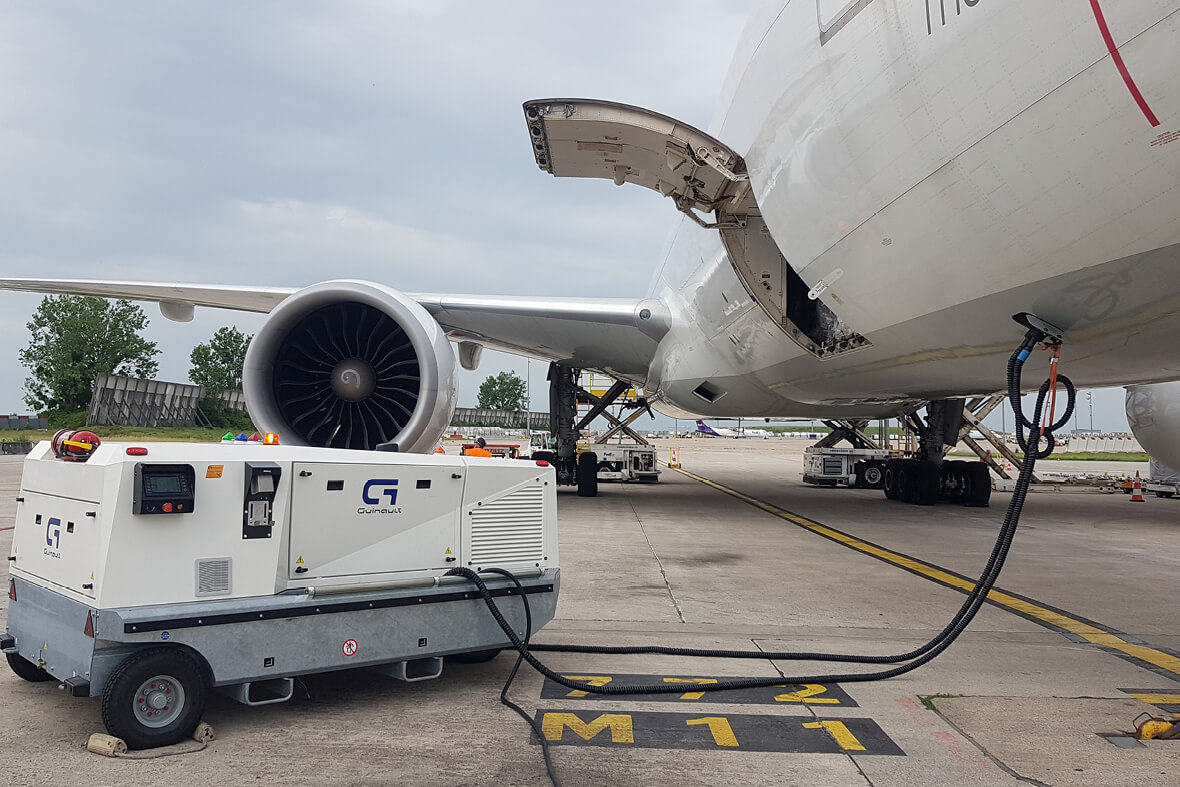 Demand for ground power units (GPUs) is picking up again as airlines and airports prepare for a return to normal traffic levels. Interest in environmentally friendly models is particularly high, as Megan Ramsay explains

The demand for GPUs is being boosted in part by the recovery of the world’s largest domestic aviation markets – the US and China. Many orders are “already in the bucket” for 2021, says Poul Elvstroem, vice president, sales and marketing at ITW GSE. The company expects to sustain 2019 levels in 2022/23 – in line with Airports Council International’s forecast for a rise in passenger numbers as travellers return to the skies.
“Hereafter, we foresee normal growth – maybe even beyond as we have a long and solid pipeline that for sure will happen. The question is just how fast the orders will tick in,” Elvstroem says.
“Proof that this will happen is that during the first two weeks of June, we received small and medium-sized orders in the range of US$5 million.”

Changes
With regard to the pandemic and its effect on the aviation industry: “Customers’ power needs as such have not really changed, but we have noted an even stronger commitment to sustainability and to the reduction of the industry’s carbon footprint,” says Rune Lind Pedersen, strategic marketing and area sales manager at ITW GSE.
“Therefore, there is a big push on green energy and recovery plans are heavily based on green investment.”
This aligns well with ITW GSE’s vision of delivering the cleanest, most reliable and cost-efficient GSE to the aviation industry. Back in 2018, the company decided to concentrate its research and development efforts on its green core product portfolio of emission-free solid-state core products – which has proven to be a good choice.
In late 2020, the Airport Carbon Accreditation Organization introduced two new accreditation levels: Level 4 Transformation and Level 4+ Transition. The aviation industry is setting higher targets and actively seeking practical ways to reach them, and green products naturally play a prominent role in achieving these ambitions.
ITW GSE has analysed the number of GSE units and the emissions from each product during an aircraft turnaround. Although it is perhaps tempting to think that pushback tractors are the biggest culprit in this respect, the company’s investigations show that 42% of emissions during turnaround come from a diesel-driven GPU, because the diesel unit is running all the time whereas other types of equipment are not.
“So if you want to go instantly green, the replacement of diesel GPUs by eGPUs clearly gives the most ‘green’ value for money,” Elvstroem considers.
The ability of ITW GSE’s range of eGPUs to reduce carbon emissions, plus their high efficiency and low noise level, has attracted the attention of many customers and this has, in turn, encouraged the company to expand its product range.
In April, it announced the launch of a 180kVA, 400Hz model, including a 140kVA model based on the same platform. These new and more powerful eGPUs are especially suited for widebody aircraft as they have two 400Hz power outlets and larger battery capacity than the 90kVA eGPU.
Its complete family of emission-free eGPUs means that ITW GSE can power any type of aircraft, from business jets and helicopters requiring 28VDC to the largest aircraft demanding a 400Hz power supply.
“Airlines have focused on operating more efficient fleets and retiring some of their more polluting aircraft, but they have also been focused on operating expenditure,” says Pedersen. “Batteries are easier to manage and their operating expenses are not dependent on fuel prices – which are much more volatile than the price of electricity. Furthermore, our eGPUs use simple components and are the most heavily tested anywhere in the world,” he continues.
Today, the complete range of ITW GSE 7400 mobile battery-powered GPUs is in use at airports across the globe, with interest in the units driven by their sustainability and the cost savings they offer.
“With the 90kVA being by far the most sold, it is also the longest living version, whereas the 28VDC JetEx and widebody 140-180kVA are recent additions. However, we have already delivered two widebody units to Maastricht Airport in the Netherlands and supplied some 28VDC units in the US, Mexico, Japan and Europe, with one unit going to Shell in Rotterdam,” Pedersen confirms.
At the beginning of 2021, ITW GSE received repeat orders from customers who have been operating on batteries for one or two years already. One of these is Viggo Service Enablers, which has won a contract to deliver ground handling services to a number of gates at Amsterdam Airport Schiphol. (Viggo has been the sole ground handler at Eindhoven Airport for 45 years. It also has a 10-year contract at Lelystad Airport, and began handling Transavia at Schiphol on 1 April 2021.)

Instantly green
Of course, the pandemic set back investments across the board, with many aviation-related businesses losing income from the outset. Spending on new GSE immediately became far less of a priority than it was previously.
However, especially in recent months, ITW GSE has seen renewed interest in both the purchase of its units and its ‘Power by the Hour’ (PBTH) subscription plan. PBTH helps customers to scale up their operations when demand returns, while simultaneously transitioning to green solutions without major capital investments.
Even though the market has not yet fully recovered, at the time of writing (late July), ITW GSE was negotiating several contracts based on PBTH conditions. Some contracts had already been concluded, including one with Viggo Service Enablers in Amsterdam.
As the subscription plan is more flexible than leasing, it can easily be adjusted to suit actual demands, both regarding number of units in service and expected hours of operation. If demand suddenly rises or falls, the plan is simply adjusted to the customer’s needs.
“It’s a great initiative to go instantly green!” says Elvstroem.

Transition
Looking back over the past year, Elvstroem highlights a trend for partnerships aiming to develop new products based on customer demand. “As the objective is to bring more green products to the market, these development projects are based on governmental and state grant funding,” he says.
The transition from fossil fuel products to electric/battery-driven products is another trend that will continue to gather momentum. While its exact timing is difficult to predict, Elvstroem believes that “once the transition gets going, it will take place at a pace that we had never expected. So be prepared!”
Another GPU provider, Guinault, has also been developing solutions to help handlers make the switch from fossil fuels to greener options. It has been focusing on developing the most reliable technology, based on its extensive experience in GPUs across five continents and in commercial, military and cargo activities.
For Guinault, energy transition is not only about electrification, but also about durability of the equipment, says CEO Lionel Clermont. “[Our] units are easily reparable, instead of being made of very expensive non-reparable components; maintenance accessibility is a core feature of the product: a durable product instead of disposable,” he says.
Special attention is given to remote maintenance and troubleshooting tools, to enable Guinault’s engineers to offer a high quality of support to the customer. In addition: “There is no compromise on the product quality,” Clermont notes. “The available technologies are deeply analysed, and developments are continuously monitored to offer the most adequate technology.”
According to Clermont, the selection of LFP (lithium iron phosphate) batteries made of prismatic cells, together with smart thermal management, appeared to be the safest and most durable solution for Guinault’s e-GPU product. The batteries are fully accessible, as are their electronic controls.
The e-GPU is designed to last a long time in the rough operating conditions on the ramp. The machine has a very flexible charging strategy: it can be charged on high voltage chargers, but also with 400Hz or 50-60Hz power supplies.

APU OFF
Guinault’s GPUs are also available in a combined ACU (air conditioning unit) 400Hz package, based on the company’s 400Hz GPU and its unique alternator. The cooling section of the Guinault GF15 Combo includes a unique ‘no frost’ concept that ensures long-lasting operation in extremely humid environments.
Having a GPU on hand is simply good sense: APU (auxiliary power unit) failure is a possibility that cannot be discounted. In June, for instance, the departure of a United Nigeria Airlines flight from Asaba International Airport was delayed when the Embraer 145’s APU developed a fault, according to a press report. Passengers had to disembark while the APU was repaired – because the airport does not have a GPU.
But Guinault’s all-in-one Combo solution is not just a useful backup. It is actually “a great substitute” for the APU, Clermont says.
Traditionally, equipment supplied by general manufacturers has not allowed for a realistic substitution of the APU, according to Guinault. Indeed, it is common to see a parked aircraft running its APU (APU ON) to ensure passenger comfort, while simultaneously GSE continues to operate without powering the aircraft – consuming fuel and costing money.
Clermont observes: “A GPU will generate 700 tonnes of CO2 savings (and corresponding kerosene burn) every year by allowing APU OFF. The e-GPU (or converter) brings another 40 tonnes of CO2 savings, compared to a diesel GPU.
“Guinault’s wish is to bring solutions that really ensure APU OFF first, electric being even better, and durability being a must. APU OFF is … Guinault’s speciality.”
Marketwise, Clermont is confident that air traffic is about to enter an “intense” period, boosted by both strong passenger wish to travel, as well as environmental trends.
“It might take some time to reach the level we experienced before Covid, but the expected rise remains promising and exciting,” he says.