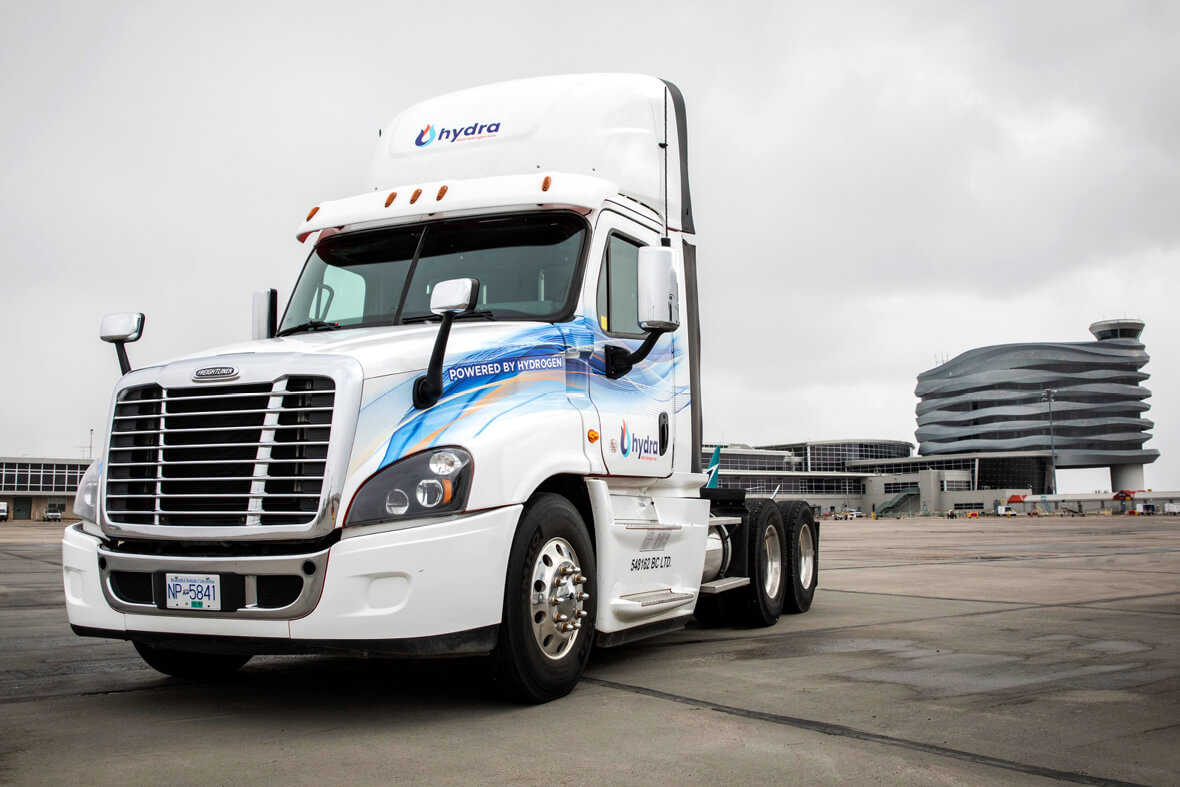 The collaboration between Alberta, Canada’s EIA and Hydra Energy, a company that has already delivered a hydrogen-powered heavy-duty truck to a customer and also offers Hydrogen-as-a-Service (HaaS) to commercial fleet operators, has been made official in a memorandum of understanding (MoU).
British Columbia, Canada-based Hydra sources low-carbon hydrogen from “chemical partners” to provide clean fuel to Hydra-retrofitted fleets “at diesel-equivalent (or lower) prices”, thus – it says – “enabling an immediate and affordable transition to cleaner trucking”.
Hydra is to convert vehicles and other specialised equipment that operates airside and in other restricted areas of the airport to run on both hydrogen and diesel. The move is expected to reduce vehicle emissions by up to 40%.
“Hydrogen continues to prove its value in reducing truck emissions since it doesn’t compromise on the power and torque required for heavy payloads, works in cold temperatures, and doesn’t add the weight of heavy batteries that can reduce payload and revenue,” explains Hydra Energy CEO Jessica Verhagen.
“In Hydra’s case specifically, our unique Hydrogen-as-a-Service model also means we can retrofit existing fleets to run on both hydrogen and diesel at no cost to fleet owners overcoming the expense hurdle when it comes to decarbonising fleets”.

Looking to the future
Verhagen tells Airside that the exact number of EIA airside vehicles that will be converted using Hydra’s proprietary hydrogen-diesel, co-combustion injection system will be assessed to determine which ones are the best fit to convert.
“Hydra is mainly looking to ensure there is appropriate space for hydrogen tanks onboard, that diesel consumption is high, and that the type of vehicle is scalable to other locations (ie, not so specialised that it only exists at EIA). For example, a runway sweeper makes a great candidate,” she suggests.
Regardless of vehicle type, however, Hydra’s dual-fuel retrofit approach allows each converted vehicle to displace up to 40% of diesel with low-carbon hydrogen – with no impact on vehicle performance. In fact: “Based on over 240,000km of on-road testing with real drivers in the most challenging road conditions, truck performance has not been negatively impacted,” Verhagen confirms.
“That means no reduction in power, torque, payload, or range. Indeed, drivers report an improved driver experience as well.”
A hydrogen refuelling station will be built on airport grounds to fuel the converted vehicle fleet as quickly as diesel. It will include hydrogen fuel storage as well.

Conversion
Typically, Hydra truck conversions take only a couple of days and, says Verhagen, it costs fleet owners nothing. The process involves the installation of:

The first EIA vehicle conversion is scheduled for 2023. Prior to then Hydra will be converting several semi-trailer trucks that also service the airport.
This MoU with the EIA is a first of its kind for Hydra, Verhagen points out – and will represent the first hydrogen-converted airside fleet in North America.
It will offer an example of the new opportunity that exists for airports everywhere to “start reducing emissions right now when it comes to a large part of their airport operations. In fact, since this announcement with the EIA, additional airports have started to reach out to Hydra to discuss potential decarbonisation of their own on-site fleets,” she announces.
According to Verhagen, EIA has recognised the opportunity not only to reduce its own fleet’s emissions but also to leverage the on-site hydrogen refuelling infrastructure that it will have to benefit other fleets in the region looking to reduce their environmental impact.
This is the case, for example, with Canadian truck operator Hercules Logistics, which is to initially operate a hydrogen-converted Class 8 fleet within EIA’s Airport City Sustainability Campus.
Another example is Veteran Express Secure Logistics (VEXSL), which has also announced that its Edmonton-based truck fleet is to be converted to use Hydra’s hydrogen-diesel, co-combustion injection system and refuelled through EIA’s upcoming hydrogen fuel infrastructure.
The plan is for an initial Hercules truck to be retrofitted to run on hydrogen and diesel very soon and if satisfactory to the client, Hydra will begin retrofitting the rest of its fleet next year.
“What’s most important is that reducing fleet emissions is possible right now through Hydra’s practical dual-fuel retrofit approach and supporting Hydrogen-as-a-Service business model,” says Verhagen. “So often when it comes to decarbonising such a challenging sector like transportation, it’s easy to focus on zero-emission solutions available down the road at a large cost to fleet operators when in fact, it’s going to take transitional, lower-emission steps to get to net zero – steps that need to start today.
“Hydra offers the only economical, viable way for fleets of all kinds – whether at an airport or on a region’s roads – to reduce their environmental impact right now without breaking the bank in the process.”