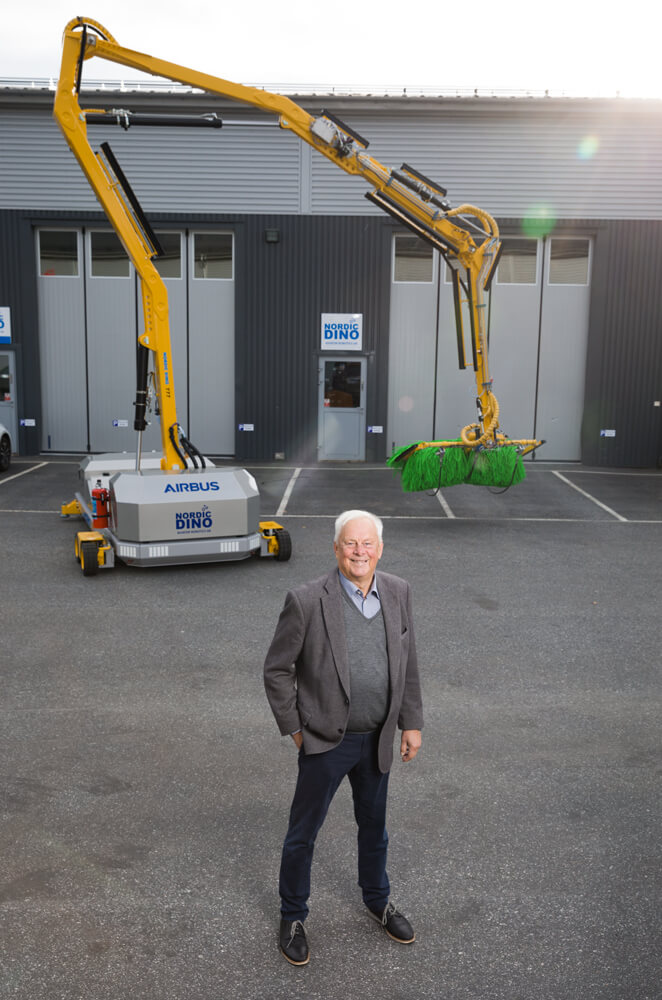 Sweden-based Aviator Robotics offers a very different way for an airline or its third-party service provider to wash the exterior of its aircraft: the robotic Nordic Dino system

Cleaning an aircraft exterior not only makes the airplane look clean and safe, the process also improves fuel consumption by washing away the dirt and other substances that have an impact on aerodynamics.

Of course, the process takes time and is generally pretty labour intensive. A robotic option that saves man-hours, gives an even wash each and every time and that does not suffer from any of the inconsistencies of human labour might therefore have much to offer.

The Nordic Dino NB, the original model, is designed for narrowbody aircraft such as the A320 and B737 families of aircraft. It has a washing height of 8.5m, with a main tank capacity of 500 litres and a spray tank capacity of 90 litres.

The Nordic Dino WB is designed for washing widebody aircraft such as A330s, A340s and B777s. It has a three-arm cleaning system with a washing height of 11m. It has the same tank capacity as its smaller NB variant and is Aviator Robotics’ biggest seller.

Finally, the Nordic Dino XWB is designed for washing larger widebody aircraft and, in particular, the Airbus A380. Like the WB variant, it has a three-arm system but with a longer under arm and shorter over arm, enabling it to reach across large wing areas. Its washing height reaches up to 11.9m, enabling it to clean even the top of a super jumbo. It is used in conjunction with WB or NB units that are small enough to get under the wing of the A380.

All three variants represent a computerised and self-contained system, purpose built for cleaning aircraft exteriors. The units consist of a mobile power unit, spray nozzles and rotating cleaning brushes. A lightweight wireless remote control enables simple and safe one-man operation of the power unit and the cleaning brushes.All three models are available in diesel or electric options. The latter are favoured for in-hangar washing operations where diesel fumes represent a significant problem. Aviator Robotics has sold the electric variant to carrier Norwegian at Oslo and Stockholm, for example, to wash B737 and B787 ‘Dreamliner’ aircraft.

Looking back
Jan Brunstedt founded the company some four decades ago. At that time, he managed a business called Nordic Aero (which he subsequently sold in 1999) that cleaned aircraft exteriors in the traditional, manual way. But business was good, and he was finding that he simply could not wash all the aircraft he needed to with fully manual procedures.

So, he canvassed a large number of International Air Transport Association (IATA) airlines to find out more about how they went about washing their aircraft, and discovered that they too used traditional methodologies.
His next step was to get in touch with large car washing operators, to see if anything could be learned from how they went about their work. While it was interesting to see how they did it on an industrial scale, the machines these companies used simply could not be applied to aircraft as different in size as the Fokker F28 Fellowships and B747s that Brunstedt was being asked to wash.

So, Brunstedt developed his own robotic machines for his own aircraft cleaning operations. By 1984 he had delivered the first of his Nordic Dinos to a client, and the business was really off the ground. Since then, Aviator Robotics has sold more than 100 units to customers in markets ranging from the Far East (such as Cathay Pacific Airways, Thai Airways, Vietnam Airlines and Singapore Airlines) to Air India in the Indian Subcontinent, to the Middle East (including Kuwait Airways and Etihad Airways) and, closer to home, Norwegian. It also recently sold two units into Airbus Industrie at Toulouse.

Brunstedt is looking to widen that market coverage further. For example, he is eyeing the UK market, as well as the US and China. He is also looking to meet the growing demand for robotic aircraft cleaning from military forces. Aviator Robotics cleaned US military tankers at the air base at Mildenhall in England for three years, for example, a demonstration of what it can achieve in this market.

The military aircraft cleaning market is potentially bigger than the civilian one, Brunstedt believes, because air forces will typically clean their aircraft so much more regularly than civilian airlines (to minimise radar signature, for one thing). Civilian carriers try to clean their narrowbody aircraft perhaps every month, he observes, widebodies perhaps every two months (although it can be a lot longer) – but air forces would look to clean their planes much more frequently.

Further improvements to the Nordic Dino system are planned. For example, the company has received numerous enquiries as to the potential for dry washing, a technique for cutting down on water use during the cleaning process (which would be particularly useful in parts of the world such as the Middle East).

Aviator Robotics is currently undertaking dry wash trials at Oslo in collaboration with Norwegian, and Brunstedt is hopeful of having a commercially viable dry wash product available by the end of this year.