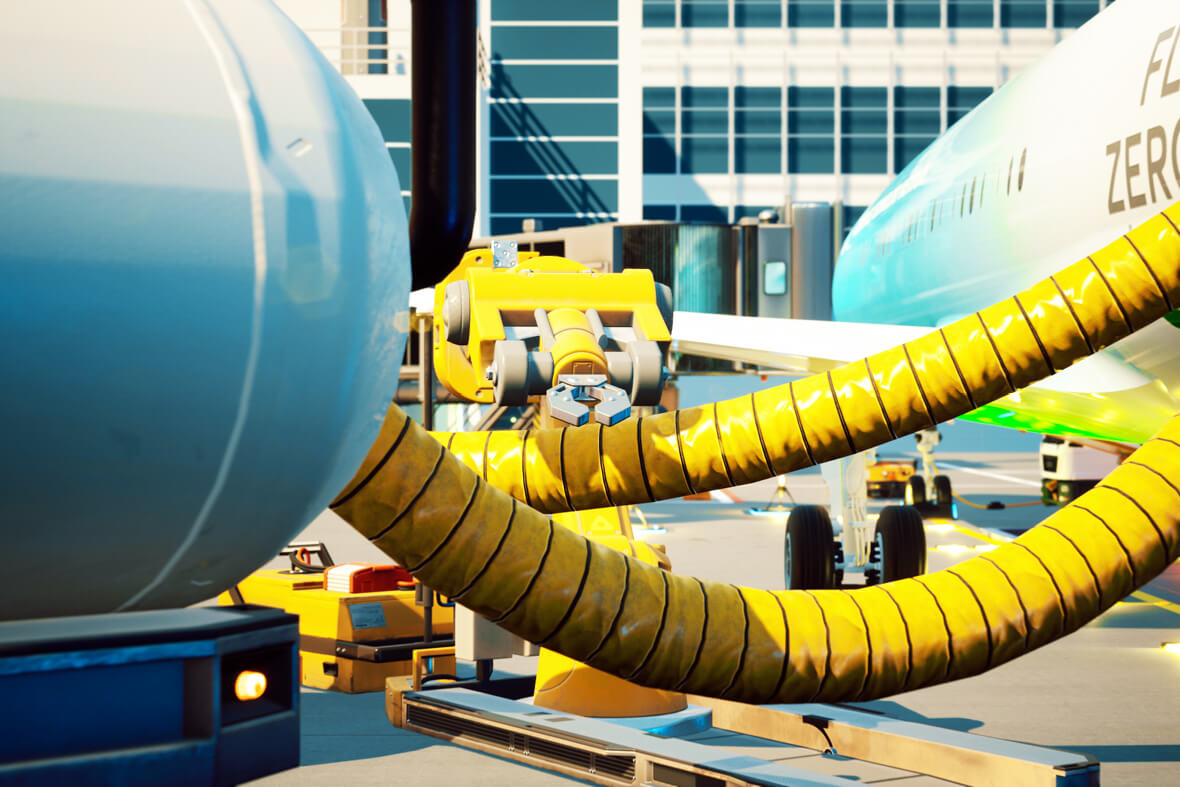 While lithium-ion batteries are becoming ever more popular as a greener power source for GSE, other even more revolutionary technologies may well start to make a significant impact. One such is hydrogen cell fuel technology

Jacobs is a global consultancy company aiming to “make the world smarter, more connected and more sustainable”, and with those points in mind it has developed a roadmap for airports to become ‘hydrogen ready’ – to prepare for the day when hydrogen fuel cell technology can be used to power aircraft and the GSE that supports them.
The roadmap, entitled ‘Airports as Catalysts for Decarbonisation’, builds on the company’s work for the Aerospace Technology Institute’s FlyZero report called ‘Airports, Airlines and Airspace – Operations and Hydrogen Infrastructure’.
Led by the Cranfield University-based Aerospace Technology Institute (ATI) and backed by the UK Government, FlyZero was launched in early 2021 as an intensive research project investigating potential for zero-carbon emission commercial flight. The independent study has brought together experts from across the UK to assess the design challenges, manufacturing demands, operational requirements and market opportunities of potential zero-carbon emission aircraft concepts.
FlyZero has concluded that liquid hydrogen is the most viable zero-carbon emission fuel, with the potential to scale to larger aircraft utilising fuel cell, gas turbine and hybrid systems. This has guided the focus, conclusions and recommendations of the project.
The Airports, Airlines and Airspace – Operations and Hydrogen Infrastructure report published earlier this year forms part of a suite of FlyZero outputs which will – it is hoped – help “shape the future of global aviation with the intention of gearing up the UK to stand at the forefront of sustainable flight in design, manufacture, technology and skills for years to come”.
Based in good part on its work with the ATI and FlyZero, Jacobs’ own roadmap has studied how airports can go about introducing the necessary hydrogen infrastructure and considers that powering GSE with hydrogen is an excellent place to begin.
Jacobs has identified three scenarios for the supply and storage of hydrogen at air gateways: the delivery of liquid hydrogen directly to an airport by truck; the use of a hydrogen gas pipeline with on-site liquefaction; or the use of electrolysis for hydrogen production on site at airports.
All methods would require the installation of some new infrastructure at a gateway and would involve the handling of new technologies. Liquid hydrogen (which offers far higher energy density than normal gaseous or compressed hydrogen) must be kept at extremely low temperatures – somewhere in the region of below minus 250 degrees Centigrade – in specially insulated cryogenic tanks.
Thus, notes Ian Sutherland, Jacobs’ senior project manager – energy transition and hydrogen, there are certainly challenges relating to storage and distribution. Nevertheless, the advantages of hydrogen are many and the challenges can be overcome with the right infrastructure and processes in place.
The challenges and potential benefits would differ according to the airport in question. Larger and more complex airports would have to involve more parties in the transition process (not only regulators and airlines but ground service providers and other interested suppliers and partners), while it seems unlikely – for the moment anyway – that hydrogen will be a viable power source for widebodied, long-range flights.
However, just about all gateways, large and small, are being asked to reign in their harmful emissions. The International Civil Aviation Organization (ICAO) and the International Air Transport Association (IATA) are amongst the industry bodies that have called for the aviation industry to operate with net-zero carbon emissions by 2050, and it will take a huge effort on the part of airports as well as all the other elements of the aviation industry if that target is to be achieved.
While the use of sustainable aviation fuel (SAF) is gaining momentum and there is plenty of potential in this resource, SAF is “lower emission” while hydrogen is “no emission”, Sutherland points out.
Moreover, while it may be argued that larger gateways are likely to have greater access to the finance necessary to make the transition to hydrogen, all have struggled as a result of the pandemic and all are likely to have little money to spare for the foreseeable future.
But, says Andrew Gibson, Jacobs’ global solutions director for aviation, we are not talking about making the switch to hydrogen tomorrow. This will be a long-term process, he advises, and one that is more about “safeguarding the future” than making an instant revolution.

Low-hanging fruit
One of the beauties of hydrogen fuel cell technology is that it can be used in “multiple applications” as a power source and, Sutherland asks, where would be the “low-hanging fruit”? Where would it be easiest and best to start in terms of the aviation industry? Using hydrogen to power GSE is his answer, not least because these vehicles operate in the constrained and regulated environment of an airport ramp area and are operated by a fairly limited number of handlers, making the transition that much simpler.
Using hydrogen to power GSE would offer a proof of concept, illustrate its viability for on-airport use, he points out, before it could be adopted as a power source for aircraft. It would be “an entry point that could then be broadened out [to aircraft].”
Or, as the report itself remarks: “Undertaking early adoption of hydrogen will create momentum to implement the significant infrastructure that will be needed to support the operation of hydrogen-fuelled aircraft.”
Landside vehicles such as terminal buses could be powered by hydrogen fuel cells, Gibson points out, concurring with Sutherland that using hydrogen for such vehicles would get those involved accustomed to using cryogenic materials and so prepare them for more widespread use of liquid hydrogen in the future – while also helping the environment immediately.
A further step up would be to power airside vehicles such as apron-based GSE with hydrogen. This would involve a slightly higher degree of complexity because it would involve more equipment operators – be they self-handling airlines or independent handlers.
Airport authorities could encourage, perhaps financially, handlers to switch to hydrogen if the appropriate infrastructure and resources were put in place, just as so many have incentivised – or even mandated – ground service providers to switch to electric power for GSE.
There is no diminution in performance for hydrogen fuel cell-powered GSE compared to their diesel peers, Sutherland informs. Indeed, as with battery-powered GSE, the physics involved often means greater torque is available, very useful for the bigger load-bearing equipment such as pushbacks.
Indeed, all the advantages of battery-powered GSE in comparison to diesel equipment apply equally to hydrogen-powered GSE, he points out. The process of creating power is not too dissimilar: in one case, liquid hydrogen is passed through a fuel cell to create electrical energy that provides power/drive to the GSE, while in the other lithium or lead-acid chemistry is used to create electrical power within the battery.
But, Sutherland and Gibson note, there are advantages to hydrogen over rechargeable batteries: huge banks of chargers are unnecessary; it is much quicker to refill with hydrogen than recharge a battery (it takes about the same time as filling a diesel unit with fuel); while hydrogen can also be used to provide power for applications such as heating or cooling terminal buildings.
Batteries can also perform less well in extreme temperatures, unlike liquid hydrogen; and batteries are expensive, have a fairly finite lifecycle and are difficult to recycle, whereas hydrogen fuel cells can be taken apart and refurbished before being put back into operation if performance does deteriorate.

Demystifying
Demystifying hydrogen fuel cell technology will be an important part of the process of encouraging the use of the technology in the aviation industry, whether for powering commercial aircraft or GSE, Gibson suggests.
But both he and Sutherland are convinced that the move to hydrogen-powered GSE is possible within the next decade, even if regularly powering aircraft on commercial flights through liquid hydrogen fuel cells might be further off.
In the short-term, hydrogen for powering GSE and other ground-based airport mobility and utility applications could be delivered by truck, as a liquid. “This would support the case for an airport to construct liquid hydrogen storage and gaseous refuelling facilities,” the Jacobs roadmap, Airports as Catalysts for Decarbonisation, says.
The cost of transport fuel in this method would be low in comparison to other scenarios, thereby making hydrogen as accessible as possible. Then, as hydrogen-powered aircraft are introduced and demand for liquid hydrogen as an aircraft fuel increases, the focus would shift towards building large-scale liquefaction and storage systems, and hydrant pipe networks for refuelling.
There are already hydrogen-powered cars on the road, as there are some buses and trucks. And the potential for hydrogen as a power source for aircraft and/or GSE is certainly being investigated today by various gateways. By way of example, the UK’s Bristol Airport is undertaking research and development (R&D) into the possibility of powering GSE by hydrogen as a prelude to low-cost carrier easyJet’s ambition to fly hydrogen-powered aircraft through the gateway if and when it is commercially feasible to do so.
And, across the Atlantic, Hydra Energy is to offer low-carbon hydrogen as complementary fuel for diesel vehicles operating airside at Edmonton International Airport (EIA) in Canada (https://www.airsideint.com/issue-article/hydrogen-offers-an-alternative-to-simple-diesel-at-edmonton/).
The Jacobs roadmap concludes: “Hydrogen, as a versatile zero emission fuel, could be the core component around which the decarbonisation of the aviation [industry] is implemented, by incrementally building the hydrogen supply and distribution infrastructure from a short-term starting point.”
We will see.