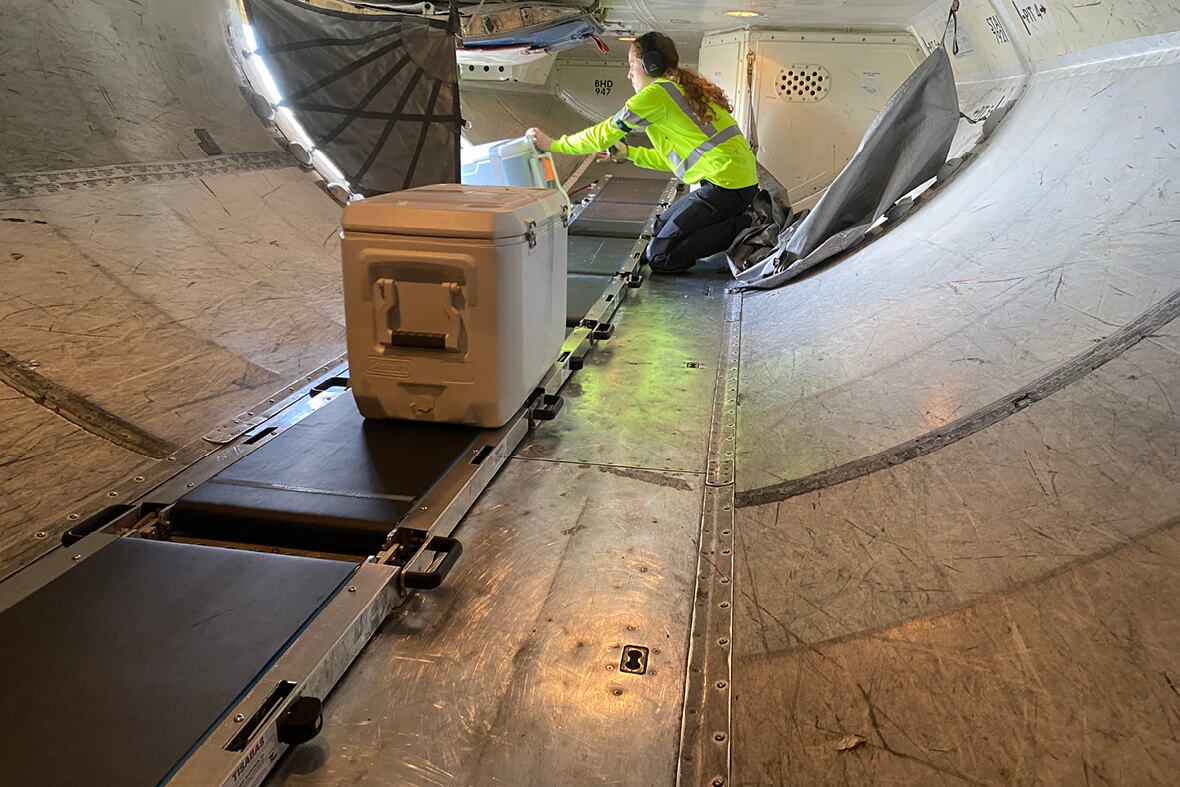 A new product designed to ease the burden of baggage and cargo handlers is now available on the market: a compact, motorised folding conveyor system that is positioned inside an aircraft belly and mechanically moves baggage or cargo up or down the hold

The conveyor is the brainchild of Tim Fulton, founder and CEO of Ramper Innovations. His company – dedicated to designing equipment that makes aircraft loading and unloading “safer, easier and more efficient” – is based in Sitka, Alaska, where Fulton lives.
The product is called TISABAS, the name based on the challenge and the premise that ‘TIm SAves BAckS’. Its main purpose is to ease the task of baggage and cargo loaders who otherwise have to throw or push loads up and down the belly of an aircraft during the loading/unloading process. Saving on human labour is far from its only benefit, however – of which more later.
Fulton, who has been in Sitka since 1989, worked for 38 years as an Alaska Airlines ramp agent. He spent much of that time loading and unloading heavy boxes of frozen fish, so he knows plenty about the physical challenges of the job. He retired from the carrier, he says, in order to pursue his dream of making the business safer.
In particular, he wanted to design equipment that would ease the task of ramp agents undertaking work that not only puts severe strain on their backs but also impacts on knees and other parts of their body as they move heavy weights within the cramped confines of a narrowbody aircraft cargo hold.
His first shot at the problem resulted in a mechanical roller system that was designed in particular to help make it easier to move heavy consignments of fish. And indeed this proved popular with Alaska Airlines, which purchased 15 units in 2014.
Handlers’ interest was also piqued. Menzies Aviation, for example, looked at the system to see if it could help with baggage handling, but here it was found wanting.
So, when Fulton left Alaska Airlines in 2018 he was looking for a solution that would be ideal for moving baggage as well as cargo such as commercial fish. The answer, he thought, lay in a battery-powered, motorised, roller-based based conveyor that would be portable but robust.
TISABAS, was Fulton, says, “designed from the ground up”. When extended, the conveyor is 6.1m long, 61cm wide and just 7.6cm high. Folded, it is 60.9cm by 53.3cm by 81.3cm high. It weighs in at 90.7kg.
Powered by a 24V battery, the system is convertible from 14V by the use of a converter that can be attached to a regular belt loader (which normally runs off 14V). It has two speed settings that can handle either 16 or about 23 bags a minute; it can bear weights of up to 150 pounds per square foot, and is operable in temperatures ranging from -29oC to +49oC.
For baggage or cargo unloading, TISABAS is placed on a regular belt loader. When the belt loader pulls up to an aircraft, TISABAS is moved inside the aircraft belly and placed out of the way until such time as it is needed. Sections of the conveyor are then folded out as the agent goes further back into the belly. The system takes a bag or other load to the aircraft doorway, eliminating the need for the agent to throw any heavy bags or cargo the length of the belly while he or she is on their knees.
TISABAS can be stored in the aircraft belly after the unloading process is completed, positioned ready for the next loading process. For loading, the conveyor’s sections are folded up and out of the way as the belly fills. TISABAS then goes back onto the belt loader and is ready for the next flight.

Development
The initial TISABAS proof of concept model was first tested live in June 2018, the unit having been built to Fulton’s specifications at a manufacturing facility in Wisconsin. Three units were ordered sometime later but, just as the first conveyors were ready to be shipped to locations as far afield as Japan and India, the Covid-19 pandemic hit, causing havoc in the aviation industry and a retreat from the interest that had been building in the new concept.
Undeterred, Fulton has continued to look for buyers. In May this year, for example, he was at King Salmon Airport in Alaska, working with Alaska Airlines and demonstrating TISABAS. Ramp agents in particular have been very impressed by the system, he says, which he has shown off at industry shows such as the biennial GSE Expo in Las Vegas. He will also be at the new GSE Expo Europe in Paris in September to exhibit TISABAS.
The system has proven its value, Fulton says, in a number of demonstrations, and is ideal for bellyholds such as those of the B737 and A321 families of aircraft. The loading and unloading process for smaller aircraft such as CRJs would also benefit from its use, he believes.
Using TISABAS helps reduce the load of baggage/cargo handlers, as well as lowering the frequency of muscle or skeletal injuries. Clearly, this benefits ramp agents’ employers as well as the handlers themselves, not only by minimising days lost through staff being off work and through injury-related insurance/compensation claims, but by making for happier staff – thereby hopefully aiding employee retention and facilitating new recruitment.
TISABAS also enables faster loading and unloading than pure manual effort, and faster turnarounds mean potentially more revenue and profit for operators. Plus, it mitigates the damage to aircraft and baggage/cargo that can result from handlers heaving and throwing heavy loads around inside an aircraft belly.
Moreover, the system is “affordable”, is reliable in inclement weather and is simple and quick to deploy. Finally, it was specifically designed as a separate unit from a belt loader, says Fulton, such that if there is any problem with the equipment, it can be quickly removed and the loading/unloading process continued with little impact on turnaround time.