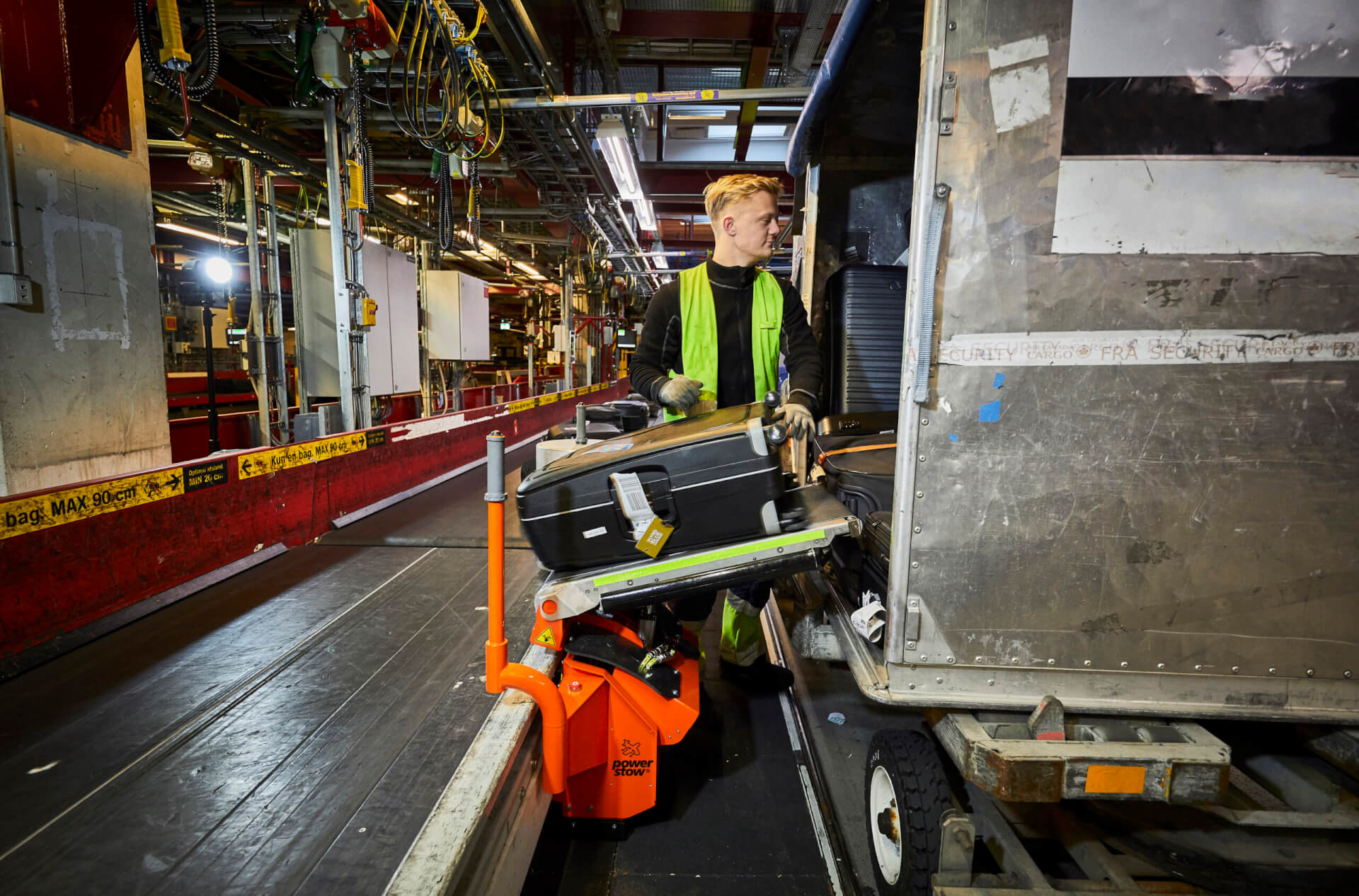 Denmark-headquartered Power Stow, well known for its extendable belt loader system, the Rollertrack Conveyor that is used by airports, ground handlers and airlines around the world, also developed the innovative Transfer Belt. The main purpose of the Transfer Belt is to assist in the unloading of baggage and cargo from various types of containers and baggage carts onto an arrival conveyor belt in a sorting area. It has proven very popular in the comparatively short time it has been available

The Transfer Belt enables faster and easier unloading of bags and cargo, allowing a handler/operator to handle a large number of baggage items quickly, efficiently and in a more ergonomically beneficial way – in particular, because it eliminates the need for lifting and twisting on the part of handlers moving bags from a cart or unit load device (ULD) to an arrival belt. A handler/operator slides bags onto a Transfer Belt, which then guides the luggage onto a conveyor belt. This semi-automatic unloading method significantly reduces the risk of back and shoulder injuries.

Kim Meldgaard, Power Stow’s international area sales manager, recalls that the Transfer Belt was developed as part of a wider corporate project looking into potential automated loading systems, but the value of the Transfer Belt as a stand-alone development was immediately apparent.

It was first shown to the public at the inter airport Europe fair in Munich in 2017. Well received at the expo, there followed a further period of prototype testing at various airports around the world, by means of which Power Stow gained further valuable user feedback, Meldgaard notes.

The Transfer Belt was launched officially onto the market early last year, and its first customer was Copenhagen Airport, Denmark’s biggest and busiest air gateway. Today, the Transfer Belt is in use at many different airports, including gateways in North America, Europe and Asia.

The benefits of the Transfer Belt are many, Meldgaard explains.

Firstly, it is designed for easy integration into different airport environments and existing baggage handling systems and so, he says, is more or less ‘plug-and-play’ in this regard.
It is also easy to use, with all functions being managed by a single operator. The operator simply slides the bags onto the Transfer Belt, which then guides the baggage onto the conveyor belt. Most of the Transfer Belt’s functions, such as movement, belt start and brake release, are controlled via a multi-purpose handle on the side of the device, while ‘Stop’ and ‘Complete’ have their own dedicated buttons located on the sides of the machine.

Operators require only minimal training on the equipment. Because it significantly cuts down on lifting heavy loads, individual handlers find it ergonomically very beneficial – while their employers benefit from staff suffering fewer injuries and taking fewer sick days.

The Transfer Belt also makes the process of transferring bags from carts/ULDs to the conveyor belt a gentler one, thus minimising potential damage to baggage during the process. And, of course, it speeds up the unloading process – indeed, representing as much as a 30% improvement in productivity, says Meldgaard.
The Transfer Belt is a patented product, and as a semi-automatic system, the first of its kind on the market, he continues. Some handlers/operators use vacuum systems or hooks to make baggage handling easier, but these do not have the flexibility of the Transfer Belt.

The equipment has been modified and improved over the last couple of years as a result of user feedback. Power Stow has worked with many different users to obtain their feedback and ensure that it meets their various demands.

“We are a company that always listens to our customers and is open for any kind of input from users. They are the real ‘judges’ of what is working, or not. So we are always happy to receive input such as ideas for modifications if they are requested,” Meldgaard remarks.