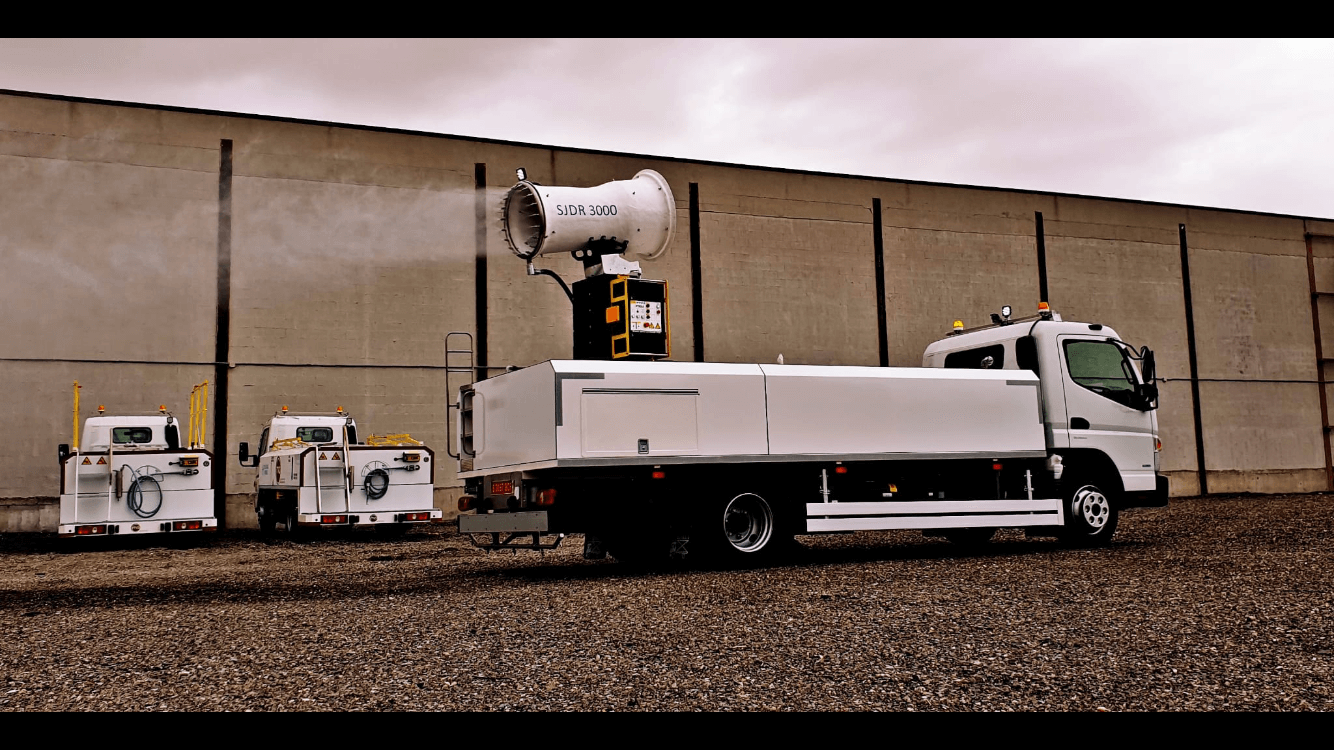 A Spanish GSE supplier is offering airport authorities and ramp operators a new way of keeping apron areas clean and safe, as part of the wider fight against the Covid-19 threat

The vehicle was developed by Tecnove by Jofrauto’s own engineering team in collaboration with one of its partners, SVAT (part of the FCC Group). SVAT was looking for a tool to help it ensure its apron is fully sanitised and therefore safe for people to work on for as long as the Covid-19 virus remains a threat.

The vehicles available on the market today were not seen as well suited to perform such a role, and so the decision was taken to develop their own specialised vehicle, to be used for disinfecting equipment and airport ramp areas.

The vehicle, given the initial commercial name of the SJDR3000, is based on a Mercedes Fuso 9C18 Duonic truck, which is equipped with a mechanical nebuliser ‘cannon’ that sprays a mix of water and sodium hypochlorite completely safe for humans. This first model has a water tank with a capacity of 3,000 litres and a 210-litre hypochlorite disinfectant tank, while the cannon is able to spray fluid up to a range of 35m.

The cannon can spray liquid at a rate of 1,200 litres per hour, and is able to rotate through 360 degrees. It is quiet even when operating at full speed and the software that controls the cannon is easy to use (via a five-button panel).

Disinfectant can also be distributed more manually by means of an extendable hose reel for areas where it is not possible to aim the cannon. The 20m hose is carried in the truck complete with nebuliser nozzle, ready for use for when required.

Tecnove by Jofrauto can offer training for users and engineers tasked with maintaining the vehicle, including advice on preventive maintenance programmes. After-sales service can be sourced from locally based support in Spain, France and Belgium, with 24-hours-a-day, seven-days-a-week assistance available via e-mail and phone.

From August, demonstrations of the unit were expected to begin in cities including Madrid, Malaga and Cordoba. Tecnove by Jofrauto confirms that international deployment of the disinfection vehicle is expected to begin in Mexico; there has also been interest elsewhere in Latin America, in the Middle East and in Europe.

Tecnove by Jofrauto’s products are in operation at more than 50 airports in 25 countries across four continents. They include catering vehicles, ambulifts, water and lavatory service units, and high loaders.