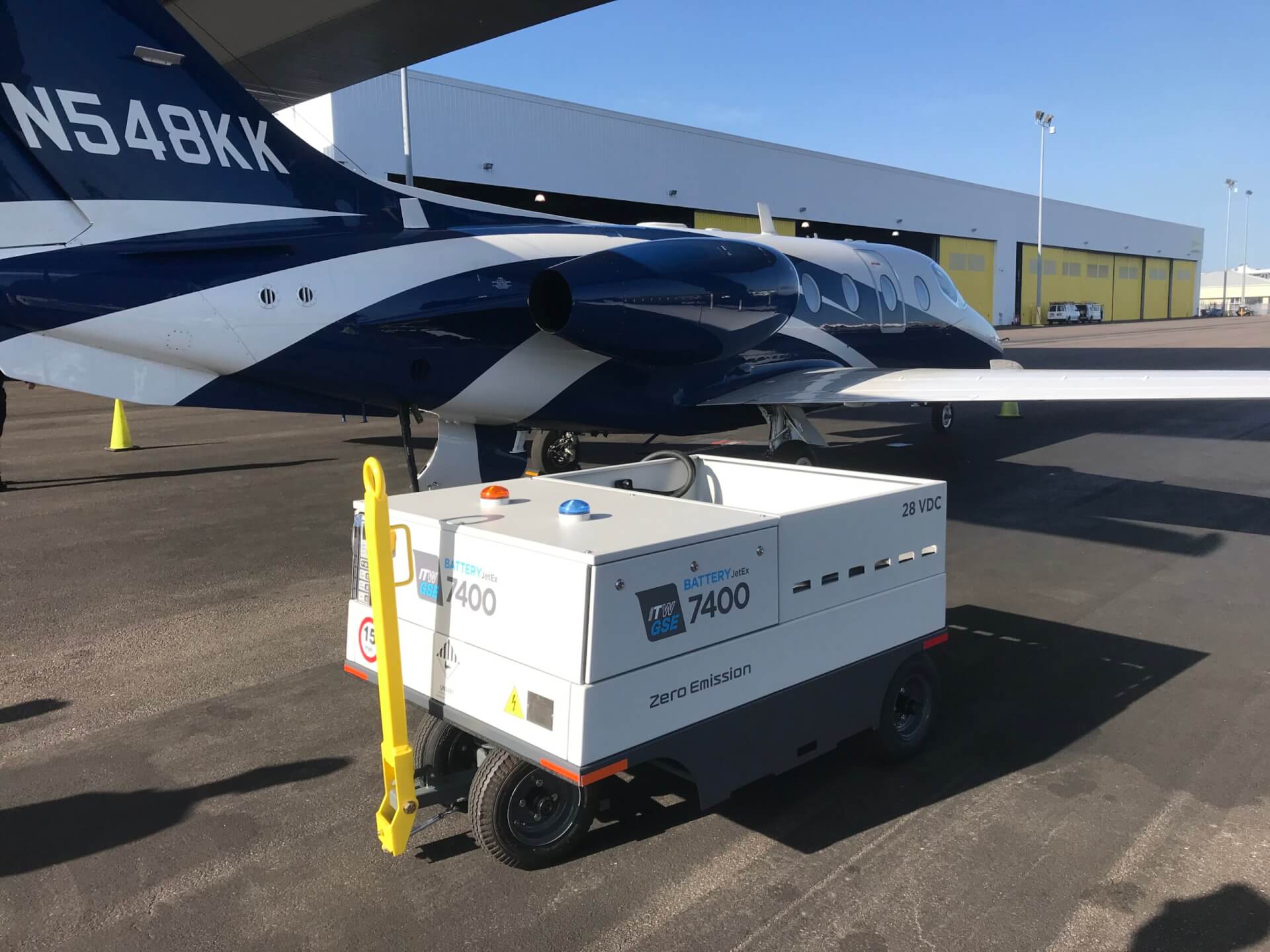 The all-electric 7400 JetEx eGPU is a relatively new accompaniment to ITW GSE’s portfolio of battery-powered ground power units. Soon, the range will be able to power all sizes of aircraft, while each unit gives off zero emissions and makes virtually no noise

ITW GSE’s 7400 JetEx eGPU is a 28V DC battery-powered ground power unit. It is only the latest addition to a large stable of GPUs offered to the fixed- and rotary-wing markets by the Odense, Denmark-headquartered, globally active company (it has manufacturing facilities in Palmetto in the US as well as in Odense).

Most distinctively, it is completely battery-powered – and therefore quiet, emitting no fumes and so eminently suitable for operations within a hangar as well as outside. It provides 28V DC power and is ideal for serving a wide range of business and general aviation aircraft including ATRs, Cessna Citations, Beechcraft, Gulfstreams, Dassault Falcons, and Dash 8 turboprops.

It is not the first battery-powered GPU in the ITW GSE stable – its 7400 eGPU is a fully electric 400Hz AC option suitable for larger aircraft including A320 Family and B737 narrowbodies, B757s and B767s. Nor will it be the last – of which more later.

Moreover, the 7400 JetEx eGPU is by no means the first in the JetEx series of GPUs. The JetEx has been in production since the 1970s, explains ITW GSE’s sales director for the Americas, Alberto Rocha. For example, the 6400 JetEx 8 is a 28V DC mobile GPU; however, it is diesel-powered, whereas the 7400 JetEx eGPU is ITW GSE’s first model to represent a 100% battery-powered option at 28V DC ideal for the business and general aviation markets of turboprops.

The 7400 JetEx of course requires no fuel and has no rotary generator. In fact, says Rocha, “We have taken out all the moving parts” from its diesel-driven predecessors, the parts that are most subject to wear and tear. “It is basically a solid-state GPU but one with all the flexibility of other generators,” he adds.

It is wheeled and therefore mobile, can support the wide range of aircraft in operation today that require 28V DC power, is ideal for indoor use, saves on fuel, emissions and noise and its battery can be charged easily and quickly by standard National Grid type power sources (any 50/60 Hz socket). With a very high battery capacity, it can also go for days without charge.

The battery is essentially the same system as that which powers a Nissan Leaf electric car. Its reliability is thus well proven, and certification is not a problem. ITW GSE worked closely with Nissan to ensure that the software and interfaces that the former designed for the 7400 JetEx eGPU would be as efficient as possible, yet the whole design, development and initial production process of bringing the 7400 JetEx eGPU to market only took something in the region of two years, says Rocha: thanks in large part to the fact that the battery is proven technology (in the automotive industry) and that ITW GSE has so much experience in 28V DC GPU design and development.

A hundred or more starts can be performed by the eGPU on a single charge, and because no special charging unit is required, it is simple to recharge. When Rocha spoke to Airside earlier this summer, one 7400 JetEx eGPU was being used on a daily basis at Tampa International Airport (the closest to ITW GSE’s Florida factory) by fixed base operator (FBO) Sheltair Aviation Services. Sheltair has acted as a validation partner for ITW GSE and it has, says Rocha, liked the product immensely.

A second unit was also soon to be deployed into a general aviation terminal at Atlanta Hartsfield-Jackson International Airport but, of course, the collapse in the aviation industry that resulted from the Covid-19 pandemic has slowed interest in the acquisition of new GPUs to a great extent this year.

ITW GSE had received numerous requests for demonstrations of the 7400 JetEx eGPU prior to the Covid-19 outbreak, many of who were willing to travel to Florida to see it in action. ‘There was a lot of interest,” says Rocha, who remains confident of that interest returning once the aviation industry returns to some degree of normality.

The primary market for the unit will be business and general aviation operators and handlers, plus FBOs. A secondary but important potential market lies in the regional commercial airline sector, those turboprop operators such as United Express that are such important players in the US aviation space.

Rocha’s own area of responsibility is the Americas, and the US market is expected to be the most important in any geographical breakdown of projected demand for the 7400 JetEx eGPU, largely because of the sizes of its business and regional airline sectors.

Rocha’s ‘patch’ stretches all the way from Canada and the US through Latin America to the Caribbean and even as far south as Antarctica, where ITW GSE GPUs are actually currently deployed at research stations that are served by icy airstrips.
The full set
Completing the ITW GSE portfolio of battery-powered GPUs will be a more powerful version of the company’s 7400 eGPU, one that will be able to serve widebodies such as the B777, B787, B747, A330, A350 and even A380. With more batteries and more power output (180 kVA), the new unit – expected to be launched before the end of this year – will mean that ITW GSE’s stable of battery-powered GPUs will be offer mobile ground power to all sizes and classes of aircraft.

Given that Rocha fully expects the global trend toward battery-powered GPUs to only grow in momentum in the future – thanks to the desire both to save on fuel costs and to minimise harmful emissions – this comprehensive portfolio will, he believes, put ITW GSE in a great position in the GPU market in what will surely be a more buoyant post-Covid-19 world.