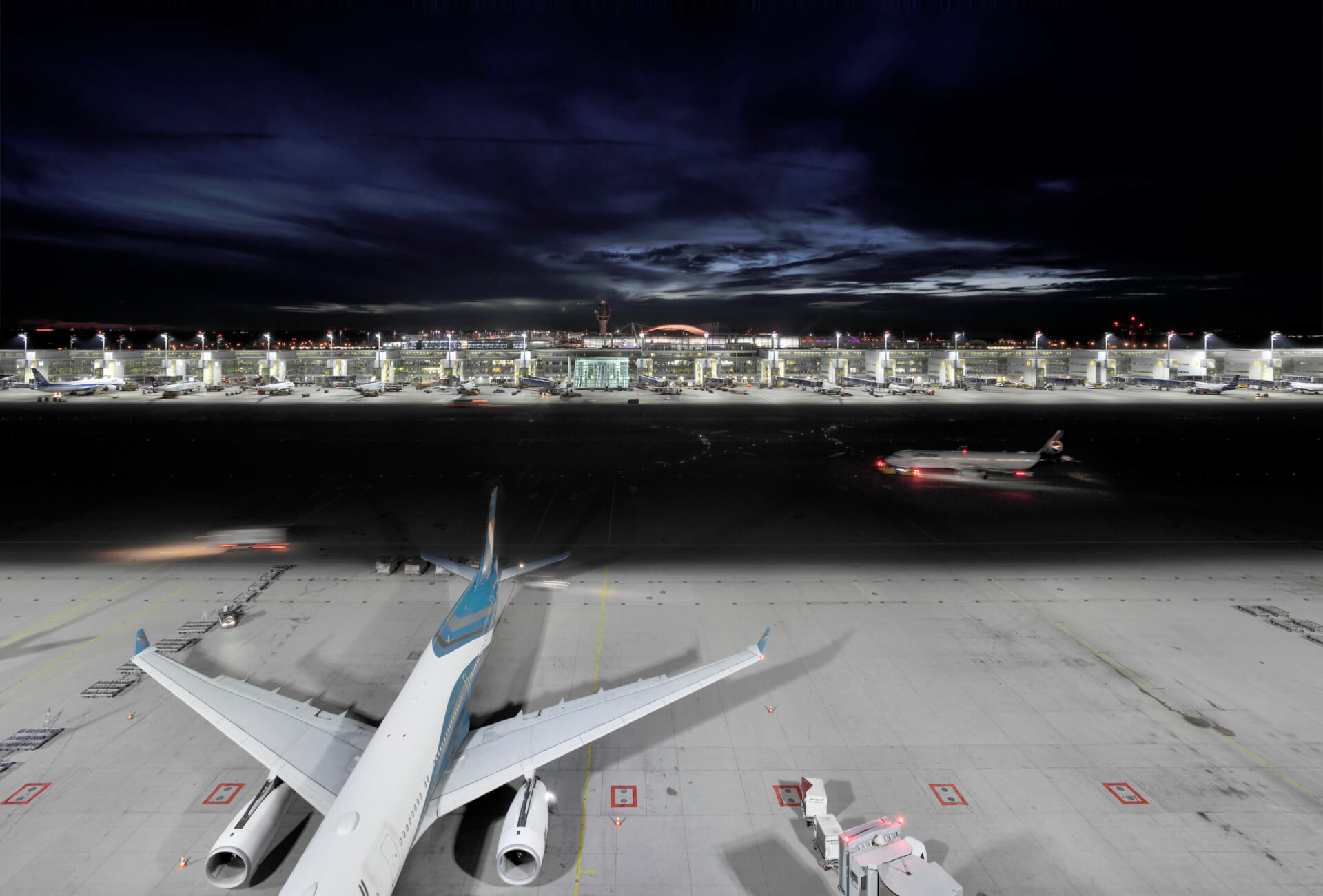 Airfield ground lighting technology (AGL) is changing all the time, pandemic or not. Some of the big players in this market explain how they are moving forward

OCEM Airfield Technology, part of the Aretè & Cocchi Technology industrial holding company, is a specialist in airfield lighting. Unlike many firms supplying to the aviation industry, “Our company has been holding up well during the Covid crisis,” says managing director Cesare Rizzoli.

“We see that many airports have kept their planned investments even though some projects have been delayed because people are not able to go on-site and carry out the work needed.”

Moreover, Rizzoli continues: “We are on track to continue our solid expansion, consolidating our position in Europe with new wins in Sweden, France, Italy, Germany, Romania and in the former Soviet Union with wins in Uzbekistan and Azerbaijan. Other regions where we have been doing very well include the Middle East, with several military contracts [agreed], and Asia, where we have won some important projects in Malaysia, Vietnam and Hong Kong.”

Recent years have seen OCEM launch a series of new products, expanding the range of LED lights it offers to the airport market. Indeed, says Rizzoli, “We really have a unique LED portfolio that in terms of performance, maintenance and reliability stands out.”

Supporting the turnkey products that have been installed at airports around the world is a substantial service support effort. “With every turnkey project we are involved from the design phase to the maintenance phase, which has created the necessity to go one step further with our services offering,” Rizzoli explains, adding: “We have also seen a move from airports to outsourced maintenance and we are at this moment looking into a series of potential contracts.”

Geographical range
Recent contract wins for OCEM span locations as varied as Niger in Africa and Uzbekistan in Central Asia.

With regards to the former, OCEM is to deliver a new airfield lighting control and monitoring system (ALCMS), LED lighting and signs for the Diori Hamani International Airport. The turnkey contract was awarded to OCEM by SUMMA, a Turkish contractor.

Elsewhere, as part of one of its biggest contracts to date, OCEM has signed a turnkey contract with a military customer in the Middle East. The contract relates to a new military airfield and covers all LED solutions for two runways and two parallel taxiways.
OCEM is to deliver systems that allow the airbase to operate in all weather conditions and 24 hours a day. As part of the contract OCEM is supplying and installing the following: 6,000 inset and elevated lights; 5,000 addressable ILCMS modules; a control and monitoring system, including individual lamp control capability; 114 DIAM 4100 regulators; and 281 LED signs.

OCEM is handling commissioning and installation to ensure that the installation is undertaken to “OCEM’s high quality standards”, says Rizzoli.

Plus, in Uzbekistan, OCEM Airfield Technology is supporting the development of the new Tashkent East Airport in a turnkey AGL project. The new gateway is Tashkent’s second – adding to Islam Karimov Tashkent International Airport. It is a CAT III airport being built on the site of Tashkent-Vostochny airfield, which previously only served military and cargo operations.

OCEM is supplying its own energy-efficient inset and elevated LED lights and will take care of the delivery, installation and commissioning of the lights and lighting control system.

As to the future, OCEM is planning for the launch of its L-861 LEMIRL medium-intensity LED lights. They are extremely robust and enable safer operating conditions, the company says. They can be used as runway edge, threshold or end lights, and OECM describes them as extremely maintenance-friendly, with easy spare parts management (having the same engineering for all configurations, one single electronic driver and one single firmware). Automatic detection of the connected LED board is possible, while the lights’ domes, LEDs and prisms can be replaced quickly when necessary.

Moreover, they are environmentally friendly, yet extremely reliable, having been proven and tested against water ingress and guaranteed in all temperature conditions from -55 to +55°C. Finally, they are user friendly, with easy plug and play installation, OCEM says.

“We have a clear goal to be the best option when it comes to airfield ground lighting,” Rizzoli states. This goal is to be achieved in four respects, he says:

Quality and reliability
“We have invested substantially in our quality processes and this has had a great impact on the overall quality of our products, as shown by their extremely low failure rates,” Rizzoli asserts.

“The other aspect is reliability, which we often consider to be our middle name. People don’t want to think about whether they are buying the right product, they need to rely upon the brand name and that name needs to stand for the highest degree of reliability when it comes to fulfilling their airfield ground lighting needs.”

Innovation
“Our approach is oriented towards the latest generation of LED lights and power solutions that boast the highest energy efficiency, and software solutions that focus on seamless interconnectivity with any other system on the airport,” Rizzoli explains.

Regional expansion
“Today more than 50 business partners and 100+ colleagues guarantee that you can find OCEM in every key airport from Chile to Australia,” Rizzoli notes. “We want to double that number so that in every country we have a solid business partner expert in AGL solutions and services so that – no matter what the country – the client always has a great partner to talk to whenever we don’t have our own people in that specific country.”

Turnkey projects
“Having seen the sharp increase in the demand for turnkey projects, we have expanded our project team quite considerably to make sure we can give customers excellent project support,” Rizzoli asserts. “We see solid growth in ever more complex projects where customers seek the right partner to take full ownership of all aspects, and we have the capabilities to deliver an end-to-end approach with the highest degree of quality of service.”

Ewo: pioneering in the field
Headquartered in Kurtatsch/Cortaccia in the Bolzano area of the Italian South Tyrol, though it also has offices in Austria and Germany, ewo supplies lighting systems for public spaces, including airports.

“We consider ourselves pioneers in the field of airport lighting, as the first company to install an apron lighting system entirely with LED-based floodlights” (at Austria’s Innsbruck Airport in 2011), says ewo’s CEO, Hannes Wohlgemuth.

“This project came about because Innsbruck was impressed with our first large area lighting project with LED fittings at Venice Cargo Terminal, which was completed a year previously,” founder and chief technology officer Ernst Wohlgemuth remarks. “Since then, we have branched out into numerous countries of different sizes around the world, and we’ve increased the versatility of our floodlights considerably.”

Today, ewo has lights installed at more than 100 airports around the globe, from desert regions to the ice and snow of Greenland.

ewo’s R–System, available in many different versions, is its most popular product for airports. In addition to the modularity of these floodlights, lighting designers and project consultants can opt for numerous distributions within each luminaire. “This allows maximum efficiency, power and malleability of our systems for any project, delivering industry-leading performance,” says Hannes Wohlgemuth.

Gateways that have installed ewo lighting include Munich, Stuttgart, Hanover, Innsbruck, Linz, Melbourne and Dubai, as well as Thule Air Base in Greenland. The lights are most typically seen illuminating these civilian and military gateways’ apron areas.

Munich’s Ramp 2 project saw the adoption of ewo’s F–System Large lighting, with high poles utilising ewo’s lights in various combinations of directional distributions. Ramp 2 followed a lot of other work ewo had previously undertaken at Munich Airport, including prior installations also using the F–System Large, a customised lighting project for a walkway at the airport and one of ewo’s most complicated lighting designs: the illuminations at MAC Forum.

The MAC Forum project was more of an “architectural illumination”, says Hannes Wohlgemuth, but it shows the level of customisation ewo that can achieve for “the best possible results”.

To take another example, the work it conducted at Thule Air Base, Greenland, required ewo to operate in extreme conditions, Ernst Wohlgemuth recalls. In order to ensure a reliable, functional system, the operating devices of the floodlights were integrated into a switchboard in a hangar and connected to the luminaires on the hangar wall via heated cable, to prevent the intense cold affecting performance.

In June, ewo confirmed that it had supplied 1,000 floodlights for an LED conversion at Dubai International Airport. The recent installation at Dubai would have been a big project for any company, given its 12.5km² installation area, the requirement to replace halogen floodlights with state-of-the-art ewo R–System floodlights, the airport’s prestige and its status in delivering 90 million passenger journeys per year, says Hannes Wohlgemuth.

ewo’s tender for this project came due to a partnership with pole manufacturer Europoles (now FUCHS Europoles). The R–System’s modularity allowed a reduction in power consumption of more than 50% on the lighting, offering much greater flexibility for the project as a whole, the company says.

ewo CEO Hannes Wohlgemuth comments: “Safety is the crucial issue in air traffic, and lighting is of paramount importance. Lighting on the apron enhances safety when important standards are met, when it is durable and reliable. Our R–System will do this – no compromises.“

ewo continues to develop new products for different applications. It recently released a new Heliport floodlight with a glare visor, making it ideal for low-level illuminations. As the name suggests, it is primarily designed for helipads and landing areas.

This year has also seen ewo release the third generation of its high-power floodlight R–System. gen3 is designed for lighting any large area, allowing up to 480 LEDs and numerous distributions, from asymmetrical to rotational, within each luminaire. It also has wide-ranging configuration options, high thermal performance and a lifetime of more than 100,000 hours, the company claims.

ewo developed a new left/right asymmetrical lens series specifically for this product, with distributions capable of delivering higher lumen output, increasing the potential for large areas in general. Founder and chief technology officer Ernst Wohlgemuth observes of these new lenses: “The key factor is precision. Our left-right system illuminates containers and aisles for example, without casting shadows, of course with 0% light pollution.

“This is in addition to continuing activity with our smaller R1 panels, which offer industry-leading accuracy of illumination for smaller areas.”

ewo has also developed LightLogger, an easy-to-use mobile measuring instrument that increases accuracy and saves time for precise measurement of luminance. It can be quickly assembled and is easily transportable, allowing geo-referencing via GPS, with self-aligning measuring sensors.

It also gives measurement of single points or wider surface areas, with simultaneous measurement of up to six measuring points, a horizontal measurement of 2m, with vertical measurement at 2m in four directions. It automatically records and evaluates in real time, with various measurement modes, producing reports and management of measurements, allowing the export of data in numerous formats. It is compliant with numerous regulations and standards (such as those of the European Union Aviation Safety Agency, EASA, and the International Civil Aviation Organization, ICAO).

LightLogger is part of what ewo call its 360° service offering. “The company remains close to the customer from the initial project idea, through support in project planning, to installation and beyond,” says Hannes Wohlgemuth.

“In addition to our focus on products, we provide all-encompassing solutions and a full set of services for sustainable projects, through design support, installation support and commissioning and after-sales support.”