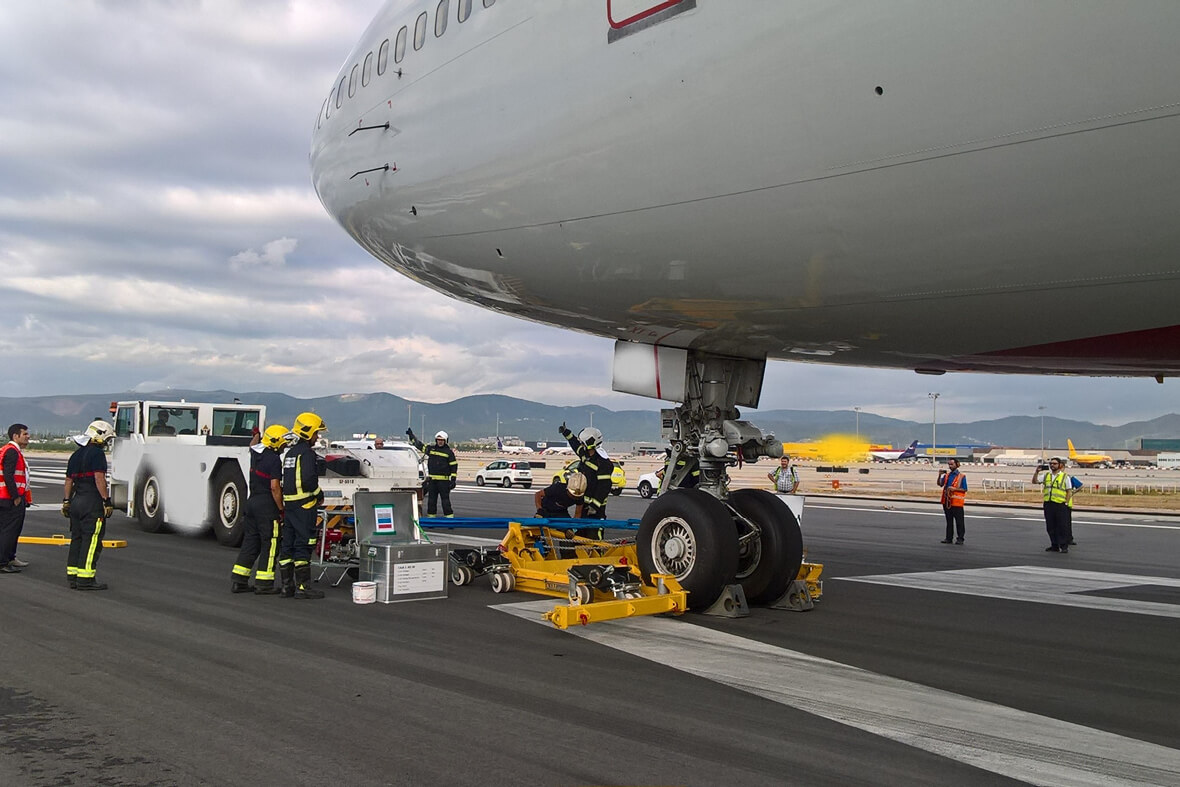 Austria-based aircraft recovery specialist K&M has inked a deal with Spanish state-owned national airports operator Aena for the delivery of 39 aircraft recovery dollies, K&M’s biggest ever order. It’s the latest sign of success for this small but fast-growing company

K&M Airporttechnik GmbH was established in 2007 by two men experienced in the demands of aircraft recovery from airport pavements. Walter Mühlfellner had been the deputy operations manager at Austria’s Graz Airport, while Franz Körbler had served as the airport’s fire brigade commander.
They knew all about the challenges of recovering stranded aircraft unable to move safely without causing damage under their own power from a runway or taxiway, and about the pressure to finish the job as quickly as possible. They were firmly of the belief that the tools available to the airport fire team at the time were not ideal for the job, and believed they could design and develop something better.
They started initially with 5- and 10-tonne aircraft recovery dollies – which are placed under damaged aircraft nose landing gear and then towed by a suitable vehicle – but understood that much bigger equipment was needed. So, they began developing what were to become – in addition to the 5-tonne capacity RD5 – the RD10, RD13, RD25, RD30, RD45, RD60 and others right up to the biggest currently available, the RD100 100-tonne capacity dolly, which was first built in 2016 and delivered to Madrid in Spain.
The dollies can handle both narrowbody and widebody main landing gears and are also used for nose landing gears.
The RD100, which is the world’s biggest aircraft recovery dolly, K&M says, can be used to recover the biggest of today’s commercial passenger-carrying aircraft: the A350-1000 and the A380.
K&M soon came to dominate the aircraft recovery dolly market in Austria (a market
Article continues on page 56…
which essentially derives from the six gateways of Vienna, Salzburg, Innsbruck, Linz and Klagenfurt, as well as Graz). In 2007, its first year of operation, it sold units into Graz, Innsbruck and Vienna, and in 2008 Linz, Klagenfurt and Vienna joined its client list.
Two years later, various RD models were sold abroad for the first time, to Cannes in France and Münster in Germany. So, in 2011 the decision was taken to really branch out into the international market, at which point Walter Rossmann joined the company to act as global sales director. Since then, K&M dollies have been put into operation at airports as geographically diverse as Ljubljana in Slovenia, the US Air Force base at Incirlik in Turkey, London Stansted in the UK, Riga in Latvia and Beijing Daxing in China.
K&M doesn’t manufacture the dollies itself: that task is carried out at the factory of Ferk Metallbau GmbH located about 40km to the south of Graz. Ferk Metallbau is contracted to handle K&M’s production requirements, acting as the exclusive manufacturer for K&M’s 100% Austrian product. K&M does handle its own training, however, going out to new customers who need to be trained on the equipment.

A show of confidence
This latest big Aena order is not the first it has placed with K&M, the airport authority having already taken delivery of large numbers of other K&M dollies and placed them in service at numerous Spanish gateways over the years since 2014. These gateways include the big hubs of Madrid and Barcelona as well as smaller point-to-point destinations such as Albacete, Alicante, Burgos, Cordoba, Gran Canaria, Girona, Ibiza, Logrono, Salamanca, San Sebastian, Palma de Mallorca and Valladolid.
Nevertheless, the Aena order – which was signed on 16 June this year – is important because it represents the purchase of so many dollies in just one contract. Delivery of the 39 units is required within 14 months, but K&M hopes to complete delivery within a year, ahead of schedule. The dollies are destined for 14 different Spanish airports, mainly smaller gateways, given that the nation’s big air hubs are already well served by K&M equipment.
The contract has a value of 2.28 million euros (US$2.71 million) and includes the purchase of 14 RD5s, 12 RD10s and 13 RD30s, along with various accessories and the provision of associated training.
Given the impact of the Covid-19 pandemic on the aviation industry, the placement of this order represents a huge success for K&M, Rossmann believes. The pandemic did have an effect on the sale, however. Aena had initially wanted a physical demonstration of the aircraft recovery equipment being proposed by the various companies involved in the tender process, but the restrictions implemented as a result of the pandemic in Spain put paid to that. Instead, bidders were asked to supply video evidence of their equipment in operation.
The deal with Aena was brokered by K&M’s agent in Spain, Enrique Feduchy, managing director of Blackorix Global Partners. Blackorix acts for K&M in the Spanish, Portuguese, US and South American markets.
As part of K&M’s growth strategy, its existing dealer network covering Blackorix’s areas of responsibility as well as Indonesia, China and India will be expanded in the “medium term”, with potential dealers being lined up for the Northern European and Asian markets.

Other products
Meanwhile, as well as its various RD dollies, tow bars and shear pins, K&M also offers a range of other equipment dedicated to aircraft recovery. For example, its SPEEDER Model 30 & Model 100 units, which are used in combination with RD dollies, are used in cases of aircraft wheel rims having been virtually destroyed, without the need for an expensive and time-consuming lifting bag system for the aeroplane’s recovery.
The damaged landing gear is raised off the ground using a hydraulic cylinder or other recovery jack. The gear needs to be raised only 150mm off the ground, and a SPEEDER is then placed under the gear. The aircraft can then be lowered gently down onto the SPEEDER , which is then pulled by a tow vehicle onto the most suitable RD dolly platform. The whole can then be towed away to a suitable place for repairs to take place.
K&M’s FAST (Fuselage Adjusting Sling Transport) system, meanwhile, fits under an aircraft’s fuselage – as opposed to the dollies that are applied around an aircraft’s landing gear – and so enables the body of the aircraft to be picked up in the event of a collapsed nose landing gear. The FAST sling system is used in conjunction with dollies such as the RD30 or RD100 or appropriate trailers for towing of the aircraft.
Using slings avoids the chance of secondary damage to an aircraft body that can be caused by fuselage recovery tables that are generally otherwise used for fuselage lifting.