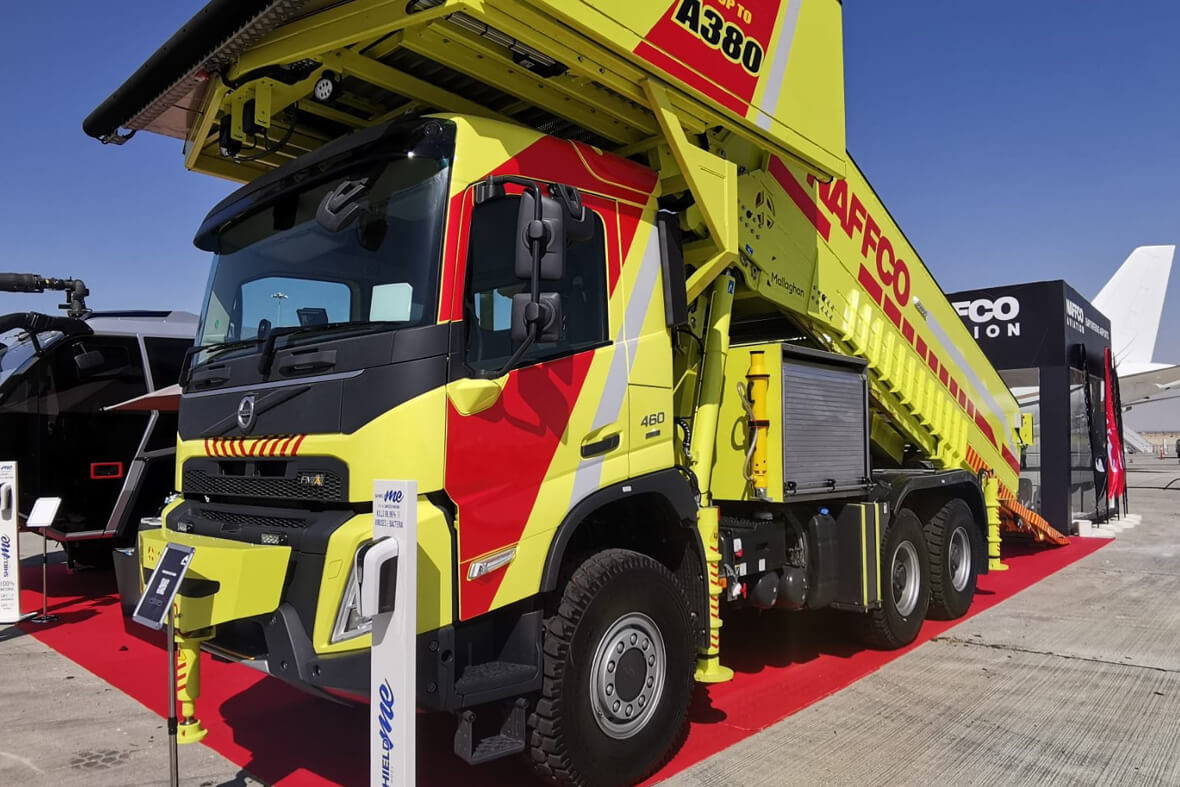 In January, Dungannon, Northern Ireland-headquartered GSE manufacturer Mallaghan announced that it was looking to recruit at least 40 more staff at its home base, as well as perhaps 10 or so more employees at its facility in Atlanta, Georgia. These additions to the workforce are a happy necessity as the company’s order books become ever fuller

The additional 40 employees at Mallaghan’s Dungannon base are required to fill positions as automotive electricians, welders, assembly fitters, hydraulic fitters, plasma operators, tube laser operators and spray painters – just about all the roles across the company’s manufacturing team.
Mallaghan is using radio advertisements and used local media to recruit. County Tyrone, where Mallaghan is based, is a hotbed of engineering for the whole of Ireland – so while there are plenty of capable, qualified engineers locally, plenty are also required to support the region’s manufacturing, farming and quarrying industries; thus there is also plenty of competition for the most capable.
These people are, happily, much needed as Mallaghan ensures it can meet the demands of new business it has attracted in recent months, as the aviation industry struggles once more to its feet and orders begin to pick up strongly.
“The Covid-19 pandemic has had a serious impact on aviation but finally, we are seeing the green shoots of recovery, with demand for air travel on the up,” says director Niall Mallaghan.
“This increase in demand is reflected by an uplift in orders for Mallaghan products which has opened up opportunities for up to 40 positions at our Dungannon site as we deliver product to major airlines and airports right across the world.”
Despite the challenges, Niall Mallaghan and his colleagues are confident of finding and employing the right people. “Working at Mallaghan is much more than a job, it’s a career,” he says. “Through ongoing training and development, our teams are supported to meet their full potential.”
Niall Mallaghan adds that Mallaghan employees also benefit from competitive salaries and overtime; the availability of a health care plan; a pension; life assurance; high street, gym and insurance discounts; long service awards; and even a ‘cycle to work’ scheme and an early finish on Fridays.
The new employees will be needed to work across just about all of Mallaghan’s product lines as well as in many different types of engineering and manufacturing trades, Niall Mallaghan confirms: helping in the manufacture of its catering trucks, its Bendibelt baggage loading systems, motorised and non-motorised passenger steps, catering trucks, bus assembly, and its water and toilet service units.

Strong order book
Mallaghan retained some three-quarters of its staff over the course of the pandemic and the resulting collapse of the aviation industry that has hit so many other GSE suppliers extremely hard. Its bulging pre-pandemic order book and the new orders it received during the pandemic have seen it through the crisis, and now things are looking much more positive.
Niall Mallaghan points to restrictions on cross-border travel being lightened in many countries, not least in the UK and Ireland, as giving plenty of cause for optimism. People are once again booking holidays, boosting the aviation industry, and Mallaghan is now receiving plenty of interest from old and prospective new customers, he observes.
“Our phones are a lot busier, with more interest and more orders,” says Niall Mallaghan. “The industry is now looking to have a very, very bright future.”
In fact, the additional staff that the company is now recruiting may only be the first phase in an ongoing process of expanding its manufacturing capacity in both Northern Ireland and at the company’s facility in Georgia, he suggests.
The competitiveness of the local Northern Irish labour pool is not the only challenge Mallaghan is meeting and overcoming. Ensuring component deliveries as required is today an issue for manufacturers in many industries, and GSE suppliers are not immune from the problem.
The bottlenecks in the semi-conductor supply chain out of Asia are perhaps the most well-known difficulty just now, and they can have a significant impact on delivery and lead times.
Today, “Stock is king,” Niall Mallaghan believes. To this end, the company is stocking up on parts and components, and ensuring that it plans well ahead to make sure that it can deliver all its GSE when and as promised.

New products, new designs
Despite the challenges of the last couple of years, Mallaghan has continued to invest in both wholly new products and in improvements to existing GSE product lines.
In the last few months, it has, for example, unveiled a new 6×6 Fire Rescue Stair at the Dubai International Airshow and an all-new electric bus at an event at London Gatwick International Airport.
The 6×6 rescue stair is a new line for Mallaghan, though it also offers a smaller model, a 4×4. The new Fire Rescue Stair is designed to enable the rapid evacuation of passengers from widebodied aircraft such as B747s and A350s in the event of an emergency.
The stair is equipped with emergency lighting, beacons, water tanks, foam tanks and hose reels, and can be customised to the exact requirements of the customer.
The first of the new 6x6s was handed over last year to Dubai-based firefighting equipment supplier NAFFCO, which showed it off at the air show in the emirate in November.
“There was a serious amount of interest in the Fire Rescue Stair at the show,” recalls Niall Mallaghan. “We can now compete in some [firefighting equipment] tenders that we wouldn’t have been able to previously.”
NAFFCO has been delighted with the new equipment, he observes, and is “very excited by its potential”.
“We believe that we will win further orders for this equipment,” Niall Mallaghan continues. “It’s not a volume product [in terms of sales numbers], but it is a specialist one and one that goes to prove that we can offer highly capable, state-of-the-art GSE.”
Then, in December, the company showed off its new electric airport bus. The battery-powered Árbus, which underwent trials with ABM Aviation, is a battery-powered variant of Mallaghan’s Árbus 50W bus that was itself only introduced to the market as recently as 2019. The Árbus is already in use at more than 10 airports across Europe.
The all-electric Árbus has the longest-lasting battery range of any airport bus on the European market and can be easily charged with infrastructure found today at large airports. Plus, because Mallaghan can supply the vehicle with different numbers of batteries (they are fitted on the vehicle’s roof), its flexible battery capacity makes the bus suitable for use at smaller regional airports or major hubs.
Mallaghan offers three models of Árbus of different sizes, with a capacity of up to 118 passengers – the largest airport bus capacity currently on the market.
Prior to ABM’s testing, and before the first vehicle left the Mallaghan factory, the vehicle had undergone extensive trials at the latter’s own test track located adjacent to its Dungannon factory, which involved thousands of kilometres of driving.
Indeed, Mallaghan undertakes stringent testing of any new product prior to launch. This commitment has proved its worth many times over, says Niall Mallaghan, not least with the electric bus and the 6×6 Fire Rescue Stair.
More than 50 people attended the launch of the electric bus at Gatwick at the end of last year, including potential customers and media. And they left feeling “very positive” about what they had seen, Niall Mallaghan remarks. That would not be surprising given that the Árbus was developed because of the interest shown in electric buses by Mallaghan customers, he recalls.
And, with many of the airport remote stands that have been temporarily closed over the last couple of years because of the collapse in the aviation industry now once again starting to open up, the need for airport bus capacity is likely to grow quickly, Niall Mallaghan believes. With so much interest now in environmentally friendly airport buses, the Árbus looks to have a promising future, he suggests.

Going electric
The electric Árbus is just the latest battery-powered variant of existing GSE product lines that Mallaghan has introduced, all of which form part of its i-tec brand of electric GSE. The process of developing new battery-powered GSE lines will continue into the future, as Niall Mallaghan explains: “To go electric is a big thing for us, and it will be important right across our future product range.”
He continues: “This is a very exciting time for the company as we further develop our i-tec range that will have a direct impact on reducing carbon emissions within aviation.
“Innovation has always driven all we do at Mallaghan and we are so proud to be playing such a critical role in reshaping the industry as it strives to achieve net zero carbon emissions by 2050.”
And, with regard to the role in this process that the new Mallaghan employees will play, he declares: “We are very much looking forward to welcoming talented new members to the team who will be instrumental in the ongoing development and future success of our i-tec portfolio.”
The i-tec brand has been very well received, Niall Mallaghan says. Large numbers of ground service providers and airports have set targets on carbon neutrality and he believes that this drive towards electric GSE is only likely to grow in intensity.
Mallaghan already offers electric versions of many of its product lines, including its Bendibelt, its motorised stairs and – as we have seen – its airport bus. It expects to roll out an electric truck chassis for its catering and other vehicles soon.
A fully electric de-icer will be a challenge, Niall Mallagahan admits, because it takes so much energy to heat de-icing fluid, but the company’s engineers are looking into the potential for a fully battery-powered de-icing unit.
“Innovation is so important,” Niall Mallaghan observes, “and this is reflected in our company’s motto of ‘Innovation in Aviation’. We listen to our customers and we find out what they want that they don’t already have.” The result is new individual products and whole new product lines, such as those of the i-tec brand.
The company has also invested, and continues to invest, in its own staff, facilities and processes. The current search for new engineers is testament to that, as is Mallaghan’s recent purchase of new equipment including two lasers for material cutting to ensure that it can exploit the latest manufacturing techniques.
The future looks bright, Niall Mallaghan concludes.