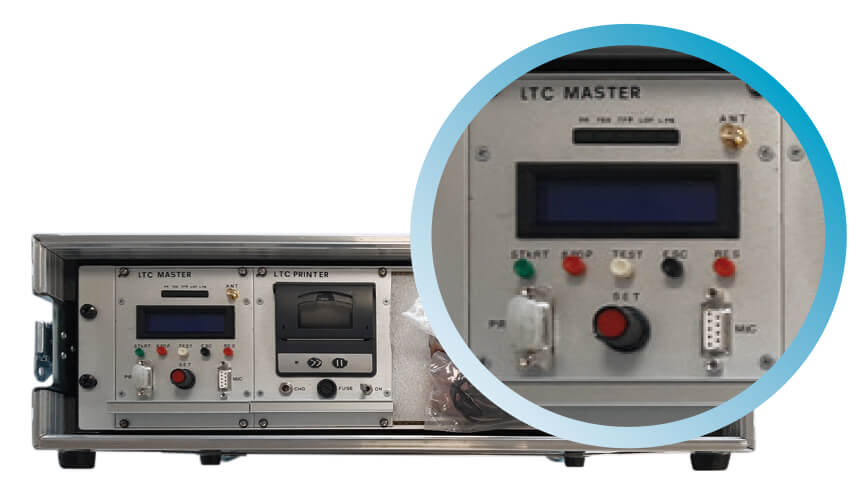 The LTC consists of a master unit that is installed in an airfield control site, typically an air traffic control tower, and what is described as a subordinate (or ‘slave’) unit taken onto the airfield. The latter is connected to a ‘power light’ device that – through a standard Federal Aviation Administration (FAA) connector – is placed between the monitoring module and an airfield lamp on which the failure response time is going to be checked.

The master and slave units are wirelessly connected with a communication range of up to 12km.

The master unit incorporates a device that will detect the acoustic signal that is generated by a lamp failure. On an integrated printer it will then produce a report on the test: the failure response time in milliseconds as well as the LTC’s individual serial number.

As well as timing the lamp failure feedback response time, the LTC can also be used to check the ‘switch on’ command time needed to light individual lamps and so the wider AGL environment.

The instrumentation has been tested and certified by the Piacenza, Italy-based SIET testing laboratory, and has a patent pending.

MC Solutions delivers the components of the LTC in what is described as a purpose-made ‘aeronautical suitcase’ complete with handle and snap-lock system. The use of the measuring instrument does not require screws or other fastening mechanisms that could be dropped or lost. The LTC system requires calibration just once a year.

Of the 15,000 MIA modules and 6,000 connectors installed, there has not been a single failure over the past year, the company reveals.

The MIA airfield lighting control and monitoring system (ALCMS) is a fibre optic system that enables remote monitoring and testing of an AGL system. With high-speed connectivity and requiring little in the way of maintenance, MIA incorporates an aircraft detection system that can highlight any runway incursions as part of a wider surface management ground control system. This technology need only ever be calibrated once – on installation.

The fibre optic data transmission of the FAA and European Aviation Safety Agency (EASA)-compliant MIA system that connects the airfield to tower at Marco Polo Airport in Venice is a development of the MC Solutions’ copper wire-based AGL monitoring system that is in place at a number of other Italian air gateways.

The software is tailored to the customer – not just the layout, but functionalities and interface as well. The software is controlled, uploaded and updated remotely.

MIA consists in the main of two devices: Monitor Control Lamp Opticals (MCLOs) that monitor airfield lamps and for which there is a worldwide patent pending; and Crossing Detection Units (CDUs) that recognise an aircraft or vehicle, its speed and its direction, through a magnetic loop installed in the airfield asphalt for runway incursion detection.

MIA is a high-speed system handling large volumes of data, with monitoring of both primary and secondary AGL services. It provides feedback from any malfunctioning lamp in a single second. That communication is free from interference because it does not use wireless technology.