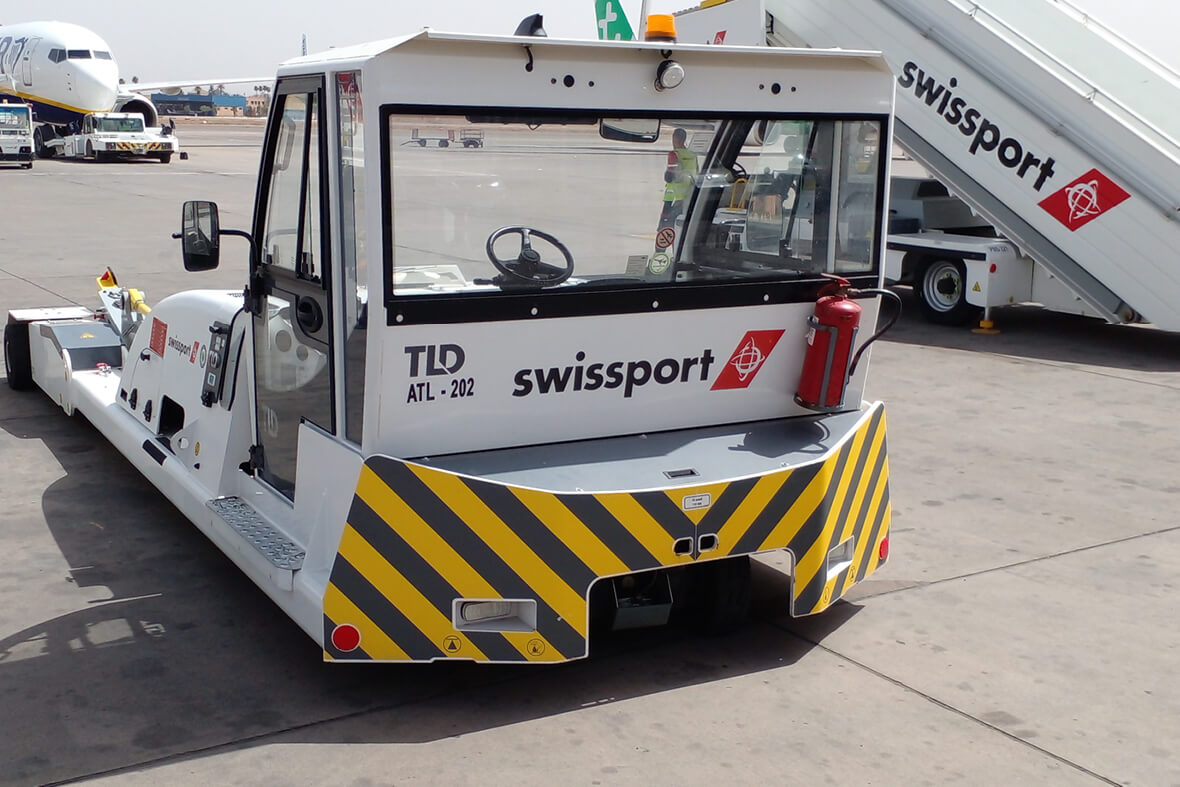 Globally active ground services provider (GSP) Swissport has done much to lower its environmental footprint as part of the aviation industry’s ongoing efforts to become greener. Its move towards electric GSE represents a key part of its strategy to minimise emissions – as is evident in its Moroccan operations…

Swissport’s operations in Morocco date back to 2012, when it won a contract to handle at a number of different airports across the North African nation. Seven years later, it won a tender from the Moroccan airport operator ONDA to handle at no less than 15 stations (namely: Agadir, Al Hoceima, Casablanca, Dakhla, Errachidia, Essaouira, Fès, Laâyoune, Marrakech, Nador, Ouarzazate, Oujda, Rabat, Tangier and Tetouan).
The licence was granted from 1 October 2019 for a period of seven years and was extended by 18 months in response to the Covid pandemic.
At the time, Christophe de Figueiredo, then CEO of Swissport Morocco, promised: “At our Moroccan locations, we will continue to invest in highly trained staff and deploy state-of-the-art equipment, many of which will be electrically powered to further improve our carbon footprint.”
And Luzius Wirth, then executive vice president Europe, Middle East & Africa at Swissport International, added: “Morocco is of great importance for us. Our commitment is reflected in our sizeable deployment of state-of-the-art electric GSE in Morocco.”
The GSP stated that it would invest more than 200 million Moroccan Dirhams (US$20.7 million) to renew its GSE fleet in Morocco and would, for example, by 2021 have converted the majority of its GSE at Marrakech to electric drive.
Swissport has kept its word. Idriss Bounou, Swissport’s head of fleet in Morocco, confirms that the handler has indeed spent that money and says that as of today it has significant numbers of electric GSE units in operation at eight out of its 15 Moroccan stations.
A total of 366 brand new motorised units of GSE of various types and models has joined the handler’s Moroccan fleet since 2019 and, of that figure, 91 units have been battery-powered. That latter figure breaks down as follows:
23 sets of passenger stairs, a mix of powered and non-powered, acquired from TLD and TBD
37 baggage tractors, acquired from Charlatte Manutention
20 conveyor belts, acquired from Charlatte
10 passenger buses acquired from Yutong
1 towbarless electric pushback, acquired from TLD

The performance of the electric GSE has been more than up to scratch, Bounou observes, thanks in no small part he says, to the efficiency of Swissport International and its Morocco team for ensuring smooth delivery of the equipment.
“We have a good relationship with all the suppliers,” Bounou confirms. “They have offered good after-sales support when any problem has developed and were keen to provide five-star customer satisfaction. Moreover, we can’t deny the great effort made by our maintenance provider Airport Global Services (AGS) to ensure equipment is safe and reliable.”
Bounou has received what he describes as “really positive feedback” from Swissport handlers operating the new eGSE, who have pointed to a number of significant benefits, including the greatly reduced noise level that not only makes life on the ramp more pleasant when operating the equipment but also makes communication easier – reducing the risk of injury and improving efficiency of operations on the apron. “That’s a win-win,” he says.
The battery-powered GSE is easy to use, operators report, and does not require complex training. Plus, of course, the environmental benefits of electric GSE are perhaps the most obvious. Unlike diesel-powered equipment, electric GSE does not burn fuel and is therefore emission-free at the point of use.
Swissport has plans to further expand the amount of eGSE it has in place in Morocco; the likelihood is that most of the new eGSE will be baggage tractors, conveyor belts and passenger stairs.

Global effort
In 2019, Swissport declared its intention to have at least half of the GSE in its global inventory powered by electric means. That target may well have taken a hit because of the impact of the pandemic on both the handler directly and of course the wider aviation industry, but Swissport still has big plans for greener GSE.
In 2020, 14.6% of the handler’s global GSE fleet was electric; the proportion in Morocco was much higher.
Part of the success that Swissport has achieved in Morocco in converting to electric has been thanks to its successful collaboration with ONDA there. That co-operation has extended to both parties taking responsibility for providing the electrical infrastructure needed to support large fleets of eGSE. Swissport has committed to caring for that infrastructure wherever it is in place and has also worked with ONDA to bring in infrastructure as and where required.
For example, at its two busiest Moroccan stations – Marrakech and Casablanca – Swissport is installing its own power stations, because the infrastructure currently in place is not ideal for supporting large numbers of electric vehicles waiting to plug in to recharge.
Morocco’s example is illustrative of what can be achieved when a handler such as Swissport, working together with airport authorities, is determined to move towards the day when perhaps all GSE will be electric.