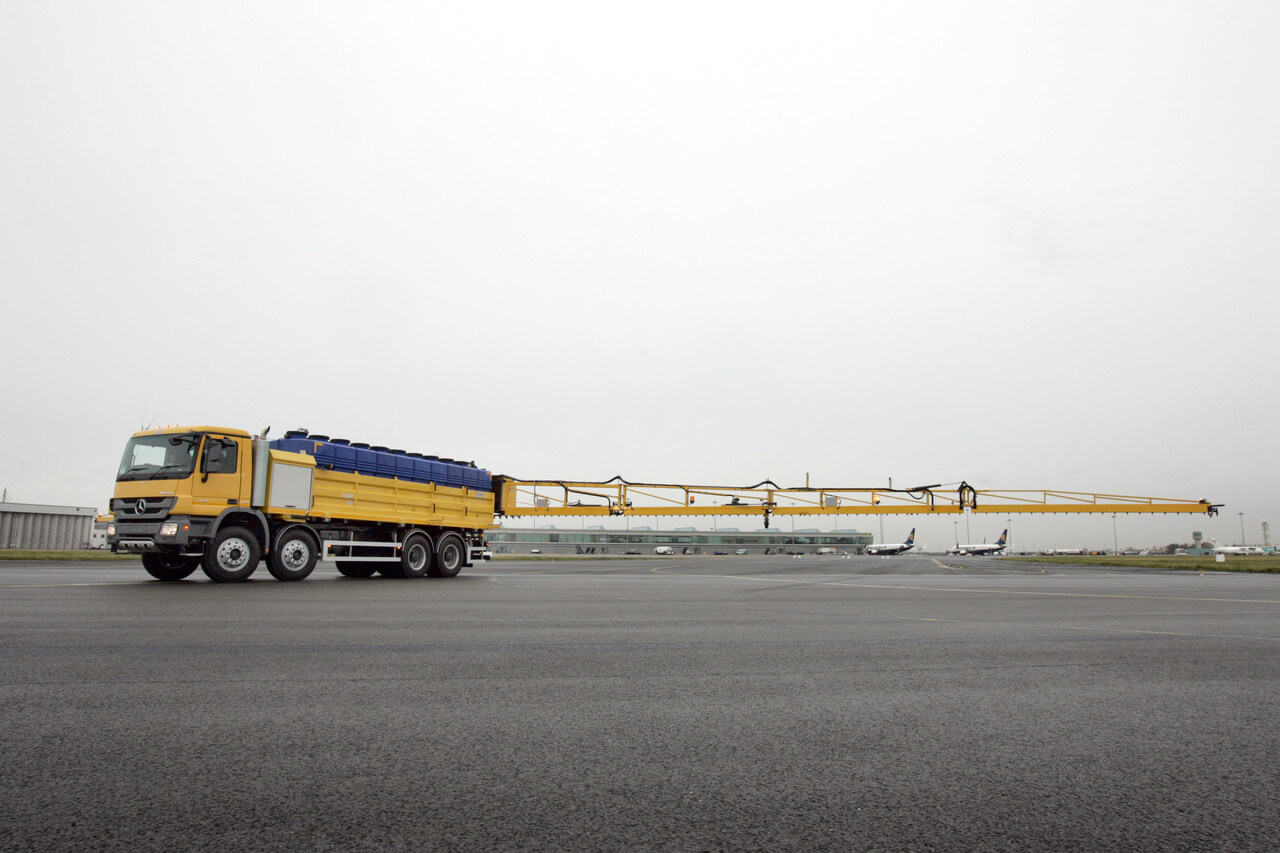 Transpoco’s technology solves two problem for Dublin Airport’s operator: the lack of visibility of vehicles moving around the airport; and the lack of a digital record of where, or how much, potassium acetate is being used in the Schmidt de-icing equipment clearing its paved areas.

The airport team has also been unable to robustly report the completion of all necessary de-icing work to airport operations and environmental agencies as and when required.

Thus, says Andrew Fleury, CEO of Transpoco, the airport operator approached Transpoco to provide a telematics solution for its de-icing vehicles, as it was aware of similar Transpoco technology having been implemented on many government (specifically local authority) vehicles in the past.

Schmidt de-icing sprayers were already fitted on the airport vehicles and, following a review of what was required, Transpoco recognised that to extract the specific data and reports requested by DAA, they would work with Schmidt to create the correct operating software on the vehicle control units and then integrate all the necessary supporting technologies.

Transpoco hardware is connected to the Schmidt control unit via a specialised wiring harness. This harness gathers the output data from the control unit and then the telematics device transmits this information in real time back to the Transpoco operating system for interpretation and updating on the cloud-based software platform.

To successfully integrate the Transpoco monitoring technology, the software on the control systems in the de-icing equipment had to be updated so that the data feed was compatible and readable by the Transpoco devices.

As a result of the installation of the new technology, the DAA operations team is now able to provide accurate, real-time reports of usage and coverage on site to ensure aircraft stands, aprons and roadways are treated appropriately and in a timely fashion.

Fleury observes: “The development of this bespoke technology is another example of how Transpoco can adapt its product to the many varying needs of the aviation world.”

The co-operation with Schmidt also demonstrates how the Transpoco team can form productive partnerships to deliver the ideal solution to the customer, he suggests.

Moreover, Fleury points out: “Thanks to our skilled development team and the opportunity to adapt a vehicle manufacturer’s software, we have produced a solution that can be offered to the industry at large”.

Transpoco initially started working on the airport de-icing technology around the autumn of 2018, and the new system went into operation during the 2018-19 winter season, Fleury recalls.

“The principle of the Transpoco telematic technology was already in use on many local authority vehicles and it was adapted to deal with the specific de-icing issues that are involved in airport operations.

“One of the biggest issues that needed to be addressed by the airport operator in this case was efficiently managing the use of glycol. The airport wanted records, hard data and evidence of when and where glycol had been spread on runways and ramp.

“Environmental protection and financial efficiencies can be achieved by reducing misuse and leaching of glycol and provide information to help aircraft operators on the airfield,” he points out.

Furthermore: “The data available on the Transpoco platform is not just limited to glycol levels. With the combination of telematics data from the vehicle and data from the Schmidt control unit, we can show not just where the glycol was spread but [also] concentration levels and other factors.

“When you combine this data with the information from the telematics of the vehicle including operator details, journey taken, speed of route, idle locations, etc, you can provide powerful insight into how the winter maintenance operations are performing.”

The Transpoco technology is now installed on the Schmidt Airport Sprayers (20m, 24m and 45m) at Dublin. The airport vehicles are Mercedes trucks with Schmidt de-icing equipment installed on them. But, beyond this gateway, Fleury considers that the system is “likely to be taken up at other airports over time and can be adapted to all types and makes of de-icing equipment”.

In fact, he says: “The technology can be used on other de-icers – the path that extracts data was made specific to the Schmidt equipment in this case, but the boarding can be used on any other manufacturer.

“Customisation is likely to be required to a certain extent in each new case, but the de-icers have an operating unit that controls spread rate and the Transpoco telematics unit can interpret and transmit the data off the control unit, so it can also be applied to any other equipment.”

Fleury confirms: “The de-icing telematics was defined by the airport operator and built by Transpoco and is therefore proprietary to Transpoco.”

Building on past experience

Transpoco had previously worked with Schmidt vehicles on behalf of its county council clients, which have used Schmidt equipment in their winter maintenance fleets.

However, this was the first time that Transpoco had worked with Schmidt on airport vehicles, and the collaboration “demonstrates how its technology can be adapted to any equipment”, says Fleury.

And he concludes: “Transpoco is not aware of the development of this exact telematics solution being used anywhere else.”

Transpoco has technology implemented in over 60 different countries and at airports in cities including Madrid, Barcelona, London, Paris, Lisbon and Brussels, as well as Dublin.