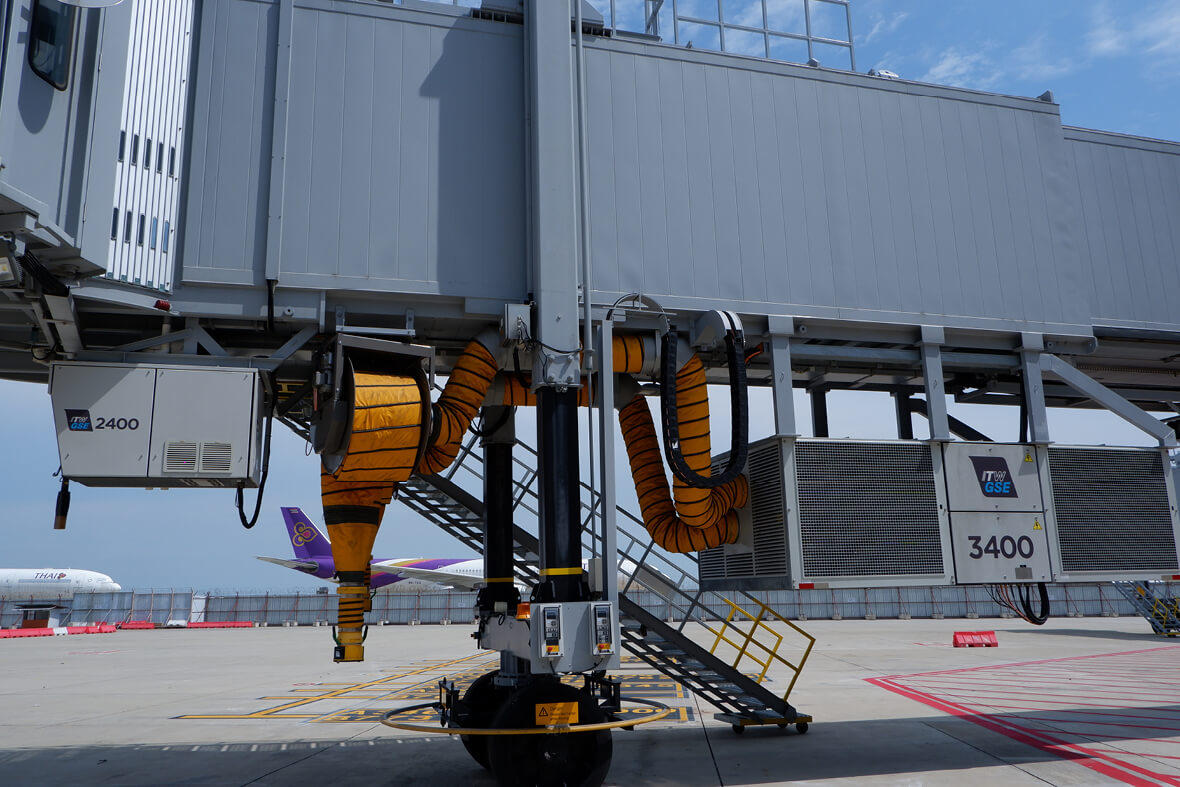 The trend towards battery-powered ground power units (GPUs) continues, perhaps at a faster pace than ever before. Meanwhile, GPU suppliers are already benefiting from the ongoing recovery in the aviation industry

With manufacturing set-ups in both Florida in the US and in Odense, Denmark, ITW GSE offers GPUs, PCAs, cables and hoses to the aviation industry, serving both the commercial and military sectors.
It has supplied equipment to customers in more than 100 countries, and can date its operations back nearly a century.
2019 marked an ‘all-time high’ for ITW GSE sales, says Poul Elvstrøm, its vice-president global sales & marketing. The company “had a really good year”, and by the end of 2019 its order book was bulging. Thus, when the Covid-19 pandemic hit in 2020, devastating the global aviation industry as passenger numbers dropped through the floor, ITW GSE was well placed to survive the ordeal.
That large order backlog meant that the impact of the downturn in the aviation sector was not felt too badly even in the worst of times, Elvstrøm recalls (and by its very nature, the business of selling GPUs and PCAs is one that involves long lead times for orders and deliveries, given that sales depend largely on major airport development programmes).
So, while flying passenger numbers dropped around the world by some 60% or so that year, the impact on ITW GSE was less keenly felt, although sales did fall somewhat in 2020, Elvstrøm informs. Some projects continued relatively unaffected, such as the huge development programme at Qatar’s Doha International Airport as the capital gears up for this year’s football/soccer World Cup. Another big customer that year was the US Coast Guard, illustrating that new, non-commercial sector business can sometimes compensate when commercial business falls away.
ITW GSE is part of a much larger ITW business that is “very financially stable”, says Elvstrøm, and this too has helped the former over the past difficult couple of years.
During the pandemic, ITW GSE had two main priorities, Elvstrøm reports: first, putting the health and safety of its own employees at the forefront of all thinking (“People are the cornerstone of our business,” he says) and, second, concentrating its efforts around doing everything possible to support its ‘80s’: the 20% of customers who provide 80% of its business.
Over and above these two priorities was the intention of ‘winning the recovery’: ie, being in the best possible position to meet the needs of the market once it does return to normality, and therefore grow along with it. Hence, training, education and developing talent have remained important, while sales and marketing efforts have in no way slowed down.
Quality has always been a priority for ITW GSE. Initially, both its US and Danish facilities were certified to ISO 9001 standard. However, as ITW GSE decided to apply for ISO 14001 certification too, it felt natural to streamline all quality processes and guidelines across the two facilities. Achieving that took time but, at the end of the day, it is of great benefit, says Elvstrøm.
All this helped ITW GSE to “gain additional market share” last year, when it recovered half of the business that it had lost during the first year of the pandemic. It is now almost fully recovered, says Elvstrøm, and excellently positioned to benefit from the growing confidence that is now evident in the aviation sector.
As well as the Doha project, other major airport development programmes in Bangalore in India, at the Red Sea International Airport under construction in Saudi Arabia, and at Amsterdam Airport Schiphol have also brought in plenty of work. The Middle East region in general continues to be a plentiful source of demand for new GPUs and PCAs, and this year Elvstrøm is expecting the North American market in particular to pick up strongly.
Beyond that, next year and then into 2024, he believes that the Asia-Pacific market may bounce back with vigour, not so much China perhaps but other markets such as Indonesia, the Philippines and Taiwan. And, in particular, he is of the mind that India may well represent the biggest potential boom in airport development projects and consequent demand for GSE and infrastructure such as GPUs and PCAs.
“So, the global passenger recovery may be slow,” Elvstrøm notes, but airport projects will be driven by regional and national dynamics as much as by increased passenger numbers across the world.

Product development
The pandemic also didn’t put a stop to ITW GSE’s spending on research and development (R&D). In fact, says Elvstrøm, it is investing more on R&D today than ever before. Much of its new product development is driven by the ever-increasing emphasis on greater sustainability in the aviation industry, not least in demand for GSE that minimises (or eliminates) harmful emissions.
The last few years have been fundamental in the development of technologies that make battery-powered GSE financially viable, Elvstrøm considers. When previously, electric GSE had been something of a dream, for most GSE types it is now more than realisable in terms of the maturity of the technology involved; what is holding the move from diesel to electric back, he considers, is the lack of sufficient charging infrastructure at many airports.
Thus, as well as the battery-driven GPUs that ITW GSE now offers (of which more later), the efficient use of power at airports is key, he says. Hence ITW GSE’s development of ‘Intelligent Power Management’ (IPM) options. IPM is described as a ‘complete gate power system’ that allows airports to enjoy the ‘smart exploitation’ of installed power based on data-driven innovation. In essence, it involves an ITW GSE installed PCA monitoring and sharing power across all gate systems in order to exploit the difference between installed power and actual consumption by equipment at any given time.
According to Elvstrøm, airport operators can readily see the benefits of such a system, while ITW GSE is also talking to carriers such as United Airlines who, too, have seen the cost-saving and efficiencies that IPM represents.
ITW GSE has long emphasised the value of electric GPUs, given that diesel GPUs are one of the main contributors of harmful emissions in the business of turning around aircraft on stand. Just recently, it celebrated the 100th 90 kVA, 400Hz eGPU rolling off its Odense production line. Plus, when Elvstrøm spoke to Airside in the spring, he pointed out that ITW GSE had received orders for no less than 21 eGPUs in just the previous fortnight – an unprecedented number.
ITW GSE can now offer battery-powered GPUs for all types of commercial aircraft, he continues, as well as serving the military market (270V DC 400Hz battery GPUs for the F35/Joint Strike Fighter (JSF), for example).
New PCA offerings are also coming on line. ITW GSE expects to begin rolling out its new PCA 3500 later this year, a system that Elvstrøm says will be very efficient in term of power consumption while offering a high degree of reliability. It will be manufactured both in Odense and on ITW GSE’s Florida production line.
All in all, ITW GSE is looking to the future with plenty of optimism, Elvstrøm declares. It is forecasting between 6 and 9% annual growth for the business in the next few years as it benefits from what it hopes will be a rapid recovery in the international aviation industry.

Guinault makes the most of the lull in the market
For Saint Cyr-en Val, France-based GPU and ACU supplier Guinault, the Covid-19 pandemic undoubtedly “deeply hurt the GSE business”, says the company’s CEO, Lionel Clermont.
On the other hand, Guinault has been using this ‘quiet time’ to design improvements and increase its range of products, he says, pointing to developments in the areas of:

Meanwhile, Guinault has embedded digital technology in its offering enabling remote monitoring capability to be improved and ensuring both highly efficient technical support and the extremely useful ‘APU-OFF’ reporting capacity.

Saving money and reducing emissions
Guinault’s APU-OFF offering relates to the provision of APU substitution solutions that enable minimal use of expensive APUs when an aircraft is on the ground (auxiliary turbine engine-powered APUs are power-hungry and more expensive to run than the electric motors or diesel engines of ground units).
Guinault customises its commercial offer to ensure the shutdown of auxiliary power units’ wherever possible, with options taking into account variables such as the type of aircraft, its configuration, airline operator processes, and so on.
Full APU-OFF capability remains “a key Guinault target”, Clermont informs, as it has been over the past decade. New, dedicated greener and smarter technologies serve this purpose, he says.
“Specialisation and technological vertical integration is the backbone of the company,” Clermont declares. “In this way the company can independently design optimal purpose-built solutions,” he adds, using modern technologies relating to power electronics, alternators, electronics, industrial refrigeration and thermodynamics.
As a result, Guinault now offers an improved range of products that meet airlines’ and ground handlers requirements, with cost-minimisation and environmental care as prime considerations, he notes.
Possible options include:

And business is getting better and better, Clermont states, though it varies from one continent to another according to the local pandemic situation. There are still issues to be resolved though: the supply chain has become a challenge for some components, and this has come alongside price inflation. Moreover, business restrictions caused by the current geopolitical situation have affected the supply chain further.
On the other hand, people are eager to travel, Clermont points out. And airlines are eager to go greener and to save further, which is exactly Guinault’s mission as illustrated in its APU-OFF solution as well as its greener ACU, ASU and GPU units, be they diesel-, electric- or battery-powered, he concludes.

Bertoli: a continuous cycle of R&D
Langhirano, Italy-based Bertoli manufactures GPUs (of 40Hz with 60 to 180kVA), generators and light towers. Alberto Calugi, the company’s marketing manager, says that – in the period leading up to the end of last year – he had been seeing more confidence in the future amongst Bertoli customers.
However, the initial months of this year brought new problems, notably increasing prices of raw materials and rising shipping costs. Then, from the end of February, the war in Ukraine further complicated what was already a “fragile situation” and resulted in a return to the uncertainties of the pandemic period.
Bertoli worked with potential customers on many offers in the months toward the end of 2021, although not all of them have yet reached fruition.
“We think the market will be stagnant for the next six to 12 months,” Calugi says. Indeed, “We think the full recovery of the market will not be seen until next year, depending on the war situation and on the rebalancing of the raw materials prices.”
Looking to the future, Bertoli is introducing new technologies to its products, especially in terms of greener, low-carbon options, and is looking to introduce them to the market through specific marketing campaigns. “Many customers have asked us for fully electric GPUs,” Calugi informs.
He confirms: “We are enhancing our portfolio of products with new items, many with greener, more environmentally friendly applications, but they are still in the development phase.”
The company has also continued to make improvements to existing products. “We are in a continuous cycle of research and development,” he observes.
Overall, Calugi concludes: “We are now in a new situation, driven by the market and by social changes. We are adapting our business model and our R&D to these changes.”