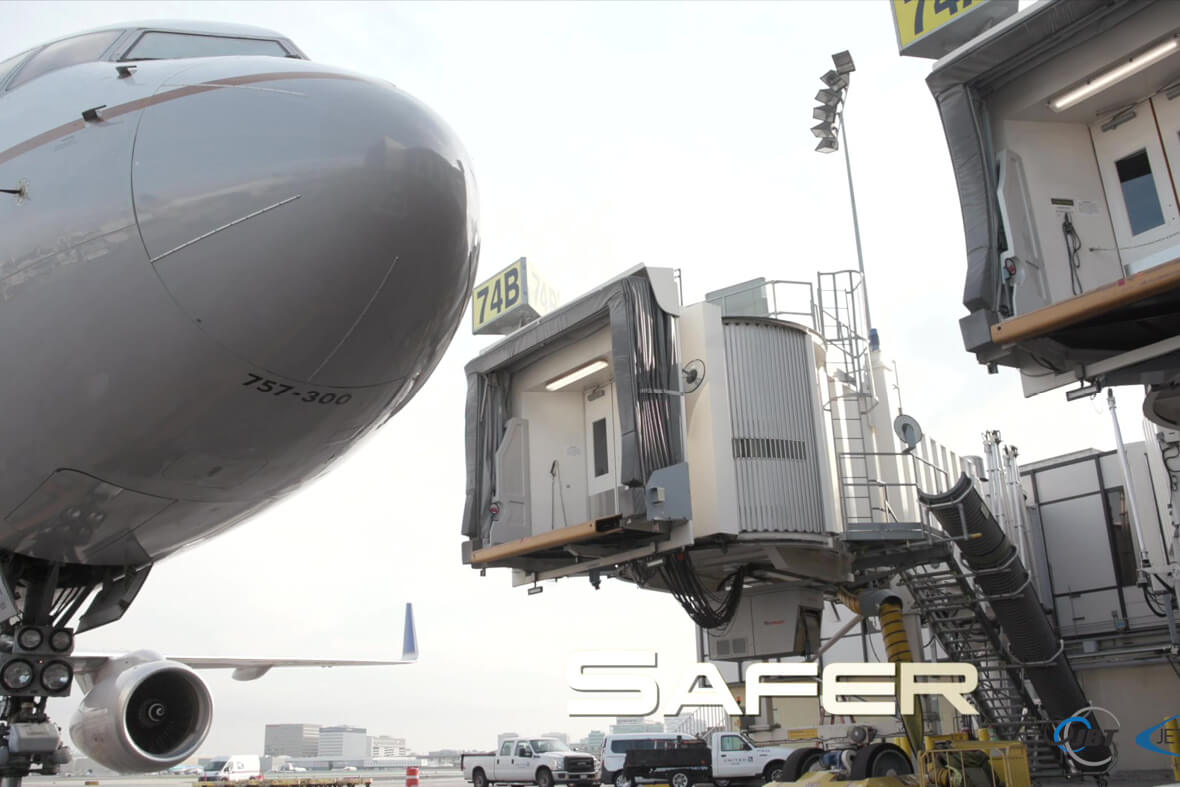 Amongst the numerous GSE suppliers that take the issue of aircraft damage very seriously is the globally active provider of GSE and gate equipment JBT AeroTech. As the company’s director of business development and marketing, Todd Tanner, points out, every turnaround that involves boarding bridges, loaders and the like represents the possibility of unwanted ‘ramp rash’: of impact between GSE and aircraft.

Damage sustained on the ramp, as a whole, represented an estimated US$5.7 billion cost to the aviation industry in 2020, Tanner says, citing International Air Transport Association (IATA) figures, with that cost projected to increase in years to come.
These sums do not only derive from damage to aircraft or other assets but also include indirect costs such as lost revenue, the cost of redirecting flights, adverse public relations, and more.

Every effort should therefore be made to mitigate the risk, optimising safety and operational procedures, controlling human factors, introducing standardisation of equipment, and so on. Tanner observes: “Manufacturers can play a key role in this risk mitigation effort by developing automation technologies specifically designed to prevent ground damage.” And he notes: “Today, the industry is very familiar with APD [aircraft proximity detection] technologies, which are designed to alert equipment operators to potential scenarios that could lead to an incident or accident.”

For instance, JBT has been working with some of its long-term partners in the field on the future of ground damage prevention technologies and one result of that is JetDock. This is an automated operator assist docking system that has been designed for JBT’s JetBridge passenger boarding bridges (PBBs) and its fleet of Commander cargo loaders.

JetDock does not rely on decals or markings on an aircraft fuselage, making it ideal for multi-use airport gates and fleets of aircraft. JetDock is designed to seamlessly dock the GSE with an aircraft while also detecting any ground obstructions on the approach to the aircraft to prevent any and all incidents that could be caused directly by the docking GSE.

With the touch of a button or two, a JetDock-equipped boarding bridge or loader can locate the appropriate aircraft passenger or cargo door, correctly align itself, and then dock. It is fast, precise and safe, the manufacturer notes. As a result, docking operations can be conducted more quickly, more safely and with more convenience to passengers. “JetDock is the future to a safer ramp operation,” JBT insists.

From a financial perspective, JBT believes that operators will soon start to consider APD and autonomous docking technologies, such as JetDock, as an investment that will allow them to retain more future earnings by mitigating the rate of risk that necessarily arises when any GSE is used to serve aircraft.

According to IATA, the implementation of simple APD systems can reduce the overall cost of ground damage to the industry by 10%. “We believe that JetDock will help to nearly eliminate all ground damage caused by the docking operation of our GSE and lead to immense savings for the industry,” Tanner says.

“With a relatively small initial investment in the technology, aviation companies can net significant returns with the savings generated from the almost complete reduction of GSE-caused incidents and accidents.”

TLD: enhancing safety and efficiency
TLD, a French GSE manufacturer that forms part of the Alvest Group, is another of the globally active suppliers that offers sophisticated technologies on many of its equipment lines designed to avoid collisions between its GSE and the aircraft they serve. Its ASD+ (Aircraft Safe Docking +) technology aims to “enhance the efficiency and safety of operations on the ramp”, explains Driss Mahjoub, group technical director at TLD.

“After the introduction of ASD some years ago, ASD+ brings additional features and increases the automation level of the equipment,” he notes. TLD’s ASD+ system controls the speed and direction of GSE on which it is installed and eliminates any adverse movement in crowded aircraft safety areas.

ASD+ enables the GSE’s approach to an aircraft to be done right “the first time, each time”, Mahjoub remarks. Recent improvements to the technology mean that, “We can achieve an impressive approach success rate superior to 95%,” he continues. “That is far better than human-driven operation in which the success rate is generally inferior to 80%; this means fewer back and forth manoeuvres and a far higher level of safety when ASD+ is switched on.”
The ASD+ system is designed to enable a very high degree of precision in the docking process (with less than an inch of platform/fuselage misalignment). It can achieve this in all weather conditions, thanks to a highly accurate calibration process and the smart trajectory algorithm used in the technology. Moreover, “Recently we have extended the ASD+ qualification list to additional aircraft models,” Mahjoub informs.

The ASD+ was developed by TLD for its loaders and passenger steps, which it regards as the most relevant equipment for such a system. According to Mahjoub, “We see great attraction to ASD+ in several markets, including Europe, China and North America. ”

TLD has worked closely with a number of large airlines to enhance the system’s capability and most of the improvements it has made in recent times have been based on operators’ feedback. Furthermore, “We cannot progress without a true collaboration with ground handlers. And we have accomplished a lot here.”

But that does not mean the process of improvement has come to an end. “We keep running and introducing new innovation to improve ground operations safety,” Mahjoub says. Areas of possible development for the future that he and his colleagues at TLD are investigating include the ‘Link’ telemetry system for fleet management and access control that offer “huge potential to improve safety and prevent aircraft damage”.

Geofencing, which allows for GSE speed auto-control, and hence significantly reduces hazard risks around an aircraft safety zone, is an area of significant interest for TLD in terms of minimising the possibility of ramp rash.
For Mahjoub, preventing aircraft damage is one of the primary concerns for those involved in ramps operations today. Moreover, the increased public awareness of the issue, as well as the environmental impact of airport operations certainly favour greater investment in both more efficient technologies and safer GSE, he continues, adding: “Making airport operations leaner and greener means more control, more precision. The more rigorous you are with those controls, the better will be the level of safety on the ramp.”

TIPS: ADPS damage prevention system
Slovenia-based TIPS has more than 50 years of history in manufacturing GSE and during this time it has been more than aware of the value of technologies that can minimise or even eradicate incidents of GSE/aircraft collision.

It has offered systems that alert GSE operators to the danger of impending collision for more than 10 years, alongside automated speed control and automatic stopping options, says technical service engineer Marjan Smole.

Such systems have been fitted to many of its passenger stairs and belt loaders sold into markets around the world, especially into countries like Germany and the Scandinavian nations.
More recently, TIPS has brought the various elements into a single Aircraft Damage Prevention System (ADPS) that can be installed on new TIPS stairs or belt loaders, or retrofitted to older equipment (it has in fact been successfully retrofitted to TIPS GSE that is more than 10 years old).

The ADPS consists of a combination of sensors and activators that control the approach of GSE to an aircraft, including both speed and stop control procedures. ADPS offers not only safety systems required by IATA but in addition systems that actually eliminate the need for an operator’s presence.

ADPS installed on TIPS stairs or belt loaders constantly monitors movements of the aircraft and makes corrections to the location of the GSE unit as it moves (through weight changes caused by fuelling, baggage loading/unloading, and so on). TIPS is, it says, especially proud to offer the system on the parallelogram passenger stairs which it claims are unique to the market.

The system already offers more capability than that laid down in IATA’s Airport Handling Manual (AHM) 913, in line with TIPS’s general policy – and it is being improved all the time, says Smole. “No matter the system, we are always looking to make it better,” he remarks.

Because the various elements of ADPS are not new, “We know it is reliable,” Smole says. Indeed, the feedback received on ADPS from customers in markets like Germany and Scandinavia demonstrate its value, he points out. TIPS is now looking to sell it more widely into markets like the Middle East, where the supplier is already active, and in the US, where TIPS wants to launch a presence.