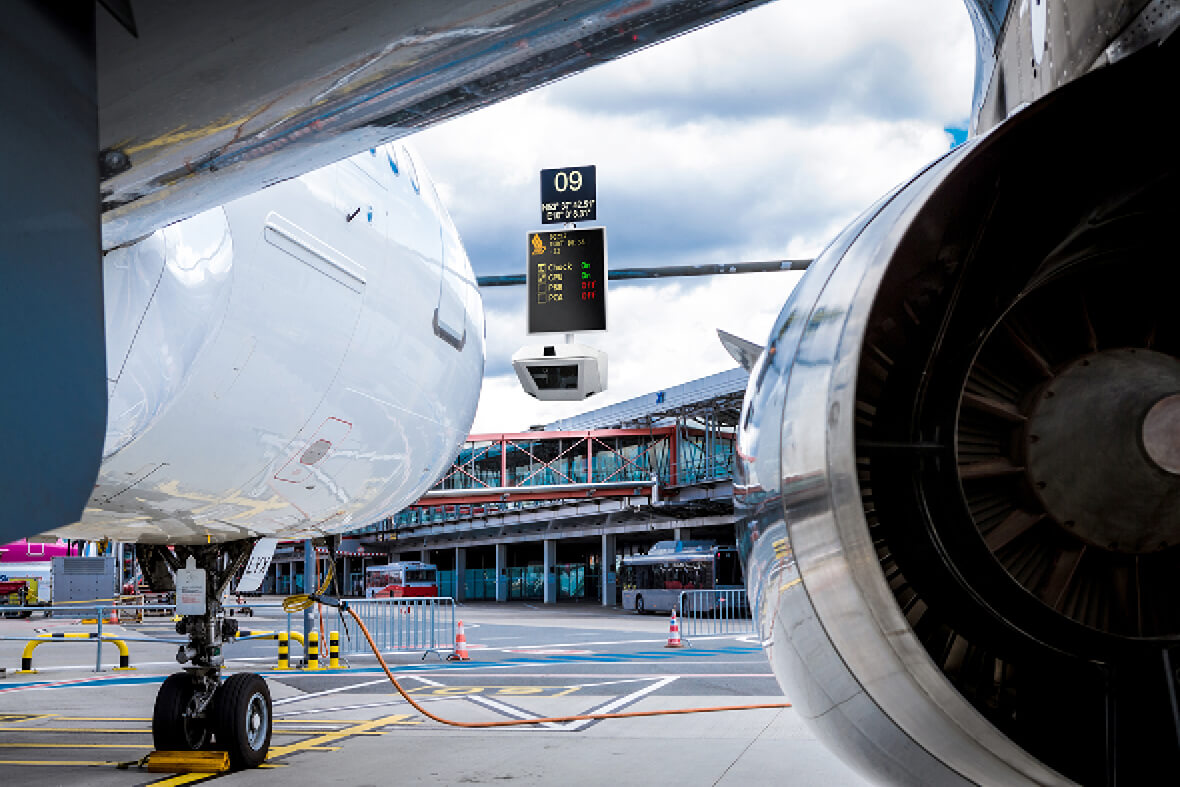 Aircraft are vulnerable to damage caused by the vehicles that service them on the ramp coming into contact with them – an increasingly expensive (and potentially very dangerous) occurrence, as more and more aircraft are made of easily damaged composite materials. Technology is helping to reduce such incidents, while proper training and consistent standards are also essential. Megan Ramsay reports

Accidents and incidents involving aircraft on the ground are by no means infrequent, especially on the apron. This is a very congested area, populated by vehicles, people and, of course, aircraft whose pilots have limited visibility from a flight deck.
From hazards like foreign object debris (FOD) and GSE; to wingtip collisions owing to the non-observance of clearances; to events like a recent accident in Istanbul where an aircraft stopped short of its parking position and the next taxiing aircraft collided with its tail – the apron is clearly a high-risk environment.
David Stark, consulting director and practice leader of enterprise risk services at insurance broker and risk advisor Marsh McLennan, outlines several reasons for aircraft damage: inconsistencies in risk management, policies or procedures; variability in maintenance and inspection of equipment and infrastructure; “non-conforming operational behaviours in the airside environment, as a result of insufficient supervision, enforcement of protocols, and high staff turnover”; and variability in the methods used to assess hazards, evaluate risk management and apply continuous improvement.
According to Stark, there are also inconsistencies in reporting cultures across airline networks and maintenance, repair and overhaul (MRO) stations. “This can lead to uncertainties and delays in incident investigation, assignment of contractual responsibilities, and insurance claim lodgement and resolution,” he points out.
Furthermore: “As modern airframes are increasingly comprised of composite materials, airworthiness can be impacted by incidents that may have previously presented less of a risk, such as a small scrape or dent caused by a ground service vehicle.”
Either way, damage to aircraft is costly not only in terms of the necessary repairs but also because of the interruption to business when turnaround is delayed as a result of an incident. Damage to aircraft is expensive, and the bill, Stark says, often comes in below insurance deductibles.
There is also of course potential for the damage to go unseen and/or unreported, a potentially extremely dangerous situation.

Solutions
One approach to reduce so-called ‘ramp rash’ is to implement technological solutions that reduce the possibility of human error causing damage to aircraft.
ADB SAFEGATE is one company that provides systems of this type. Peter Håkansson, product manager, gate at ADB SAFEGATE, says: “We believe airports should automate as much as possible, removing opportunity for human error results in safer operations.
“For example, our Safedock A-VDGS helps prevent accidents through apron scans that check for obstacles and debris; tail and wingtip clearance checks; aircraft verification to make sure the approaching aircraft is the correct type for the stand (if not, the parking procedure can be aborted); and approach monitoring to ensure aircraft enter the stand correctly, in alignment with the correct centre line.”
Other safety features include detection of unauthorised pushback, with an alert sent to air traffic control (ATC), ground operations staff, the pilot and the pushback driver.
Plus: “We can set rules to prevent pushbacks taking place on opposite stands at the same time,” Håkansson goes on. “We can create interlocking rules, too; for instance, if a passenger boarding bridge (PBB) is not in a safe position, we would not allow the aircraft to park. Another important aspect is low visibility. Pilots have a big responsibility and their view is even more restricted than usual in low visibility conditions, so it’s essential to have tools to support them in those conditions.”
ADB SAFEGATE also improves transparency, as the information the system collects is provided to airport operations, engineers, IT and management via its SafeControl Apron Management (SAM) solution. Data is available for all parties to view in a central system, which has the flexibility to allow staff to access data at home or on a mobile device, so that in the event of a critical incident, they are alerted and can take action.
ADB SAFEGATE’s gate solutions are present at 47 of the world’s 50 biggest airports, and: “We hold regular discussions with customers and partners to identify problems, operational challenges and accidents/incidents and then work together to solve them,” Håkansson says. Indeed: “This is a big force driving our development.”

Skills gap
An increasingly prevalent headache in aviation is the widening skills gap that results from the loss of older, more experienced staff alongside a lack of new, younger employees willing to work their way up.
Covid-19 has exacerbated the situation as many staff approaching retirement age have left employment early rather than return from furlough. Those who have returned from furlough, naturally, have perhaps not been keeping their skills sharp for some time in the interim.
Stark cautions: “As air travel resumes, accidents in the ramp area of airports across the world may occur, as personnel have not performed their duties for some time.”
Monika Mejstrikova, director of ground operations at the International Air Transport Association (IATA), acknowledged at the 33rd IATA Ground Handling Conference (IGHC) in November 2021 that: “Many skilled employees have left the industry and are not coming back. And recruiting, training and accrediting new staff can take up to six months.”
The potential for safety on the ramp to suffer under such conditions is clear; but has it? According to Swissport head of quality and safety David Anderson, the answer is a definite ‘no’.
He explains: “We haven’t seen any direct correlation between people coming back from furlough, or new starters, and aircraft damage incident rates. Re-induction of furloughed employees is tailored to how long they have been away and what they need to revise.
“Like other handlers, the number of passenger flights we handled during Covid dropped but cargo flights increased, so in many areas our people maintained recency. Plus, from a handler’s perspective, the same basic procedures and safety considerations apply whether handling a cargo or passenger flight.”
Anderson says the core of Swissport’s staff have remained with the company through the pandemic. The handler has also increased its staff with a high volume of new recruits – over 30,000 people globally across all business units.
“This is very positive as it demonstrates that the industry is picking up and there is no evidence to suggest that there is an adverse impact on safety,” Anderson says.
Under the specific circumstances of a global pandemic, and in the far-from-predictable post-Covid world, Håkansson is confident that automation has a big part to play in enabling airports to keep pace with demand.
“Traffic fluctuates, and automation can solve the resource issues our industry faces: airports can cope with a rise in traffic, or also a sudden drop in traffic, without re-hiring or laying off staff,” he points out.
Increased automation has other benefits, too. “First, an automated system improves safety for staff because they are no longer required to walk around on the ramp. Second, remote marshalling allows staff to monitor operations from an office, operations room or vehicle using a mobile device. This leads to efficiency gains, because it’s possible to monitor multiple stands or gates at once. Third, working conditions are improved as staff are not exposed to safety and health issues (including noise and particulate emissions) on the ramp,” Håkansson advises.
“Automation enables staff to work more efficiently. They can focus on other tasks to further improve turnaround times or be assigned to other roles.” Plus: “It’s safer when we are less dependent on human beings. The next step is autonomous decision making to prevent potential accidents or incidents,” he adds.
At some point, Anderson says, “We expect to see automated and non-automated vehicles working together on the apron. This may increase risk in the short term, but with planning and co-ordination that is fixable. We will then get to the point where all vehicles on the ramp are automated. We could consider designating one section of an airport as a totally automated area, and then expand from there.”
The technology is available – self-parking/self-driving cars are often cited as an example – but a great deal of investment in equipment and infrastructure will be required in order to achieve greater automation on the apron.
At an industry level, standardisation is top of the agenda when it comes to preventing aircraft damage. Should this be a case of top-down imposition of rules? Not necessarily, Anderson says. “We need to continue the drive for standardisation and simplification – and we don’t need regulation to do that; we should be able to do it collaboratively as an industry,” he affirms.
“Turnaround should be done the same way every time; it is a repeatable process, especially when you consider that airlines are all buying their equipment from a couple of suppliers, so different procedures should not be necessary. Every time we standardise, we lower the risk,” he believes.
While recognising that industry standardisation has moved on significantly in the last ten years, Anderson feels that there is more to be done.
He observes: “When an airline has an incident, it will change its procedures, and the same is true of ground handlers. This is for a good reason and it’s done with the best of intentions – we are all trying to improve safety – but it results in non-standard procedures.”
Training staff on each airline’s particular requirements is not helping matters either; Anderson believes that IGOM (the IATA Ground Operations Manual) is the way forward if the industry is to achieve a greater standardisation and, in turn, reduce incidents on the ramp.
At Swissport, all new GSE is fitted with enhancements such as proximity sensors as a baseline, and complies with IATA’s AHM Chapter 9 guidelines. According to Anderson: “The challenge I see coming from airlines to handlers is that you have to be certain about investment. At what point do you invest in automation and what technical solution do you adopt?
“We have to consider our landlords’ requirements versus our aspirations in terms of automation and environmental performance. We all have to collaborate with other players to make sure we stay aligned with work other parties are doing on the airfield.
“We need a co-ordinated industry approach to allow us to maximise the benefit of technology – and this should probably be led by IATA with involvement of the airport authorities,” he adds.