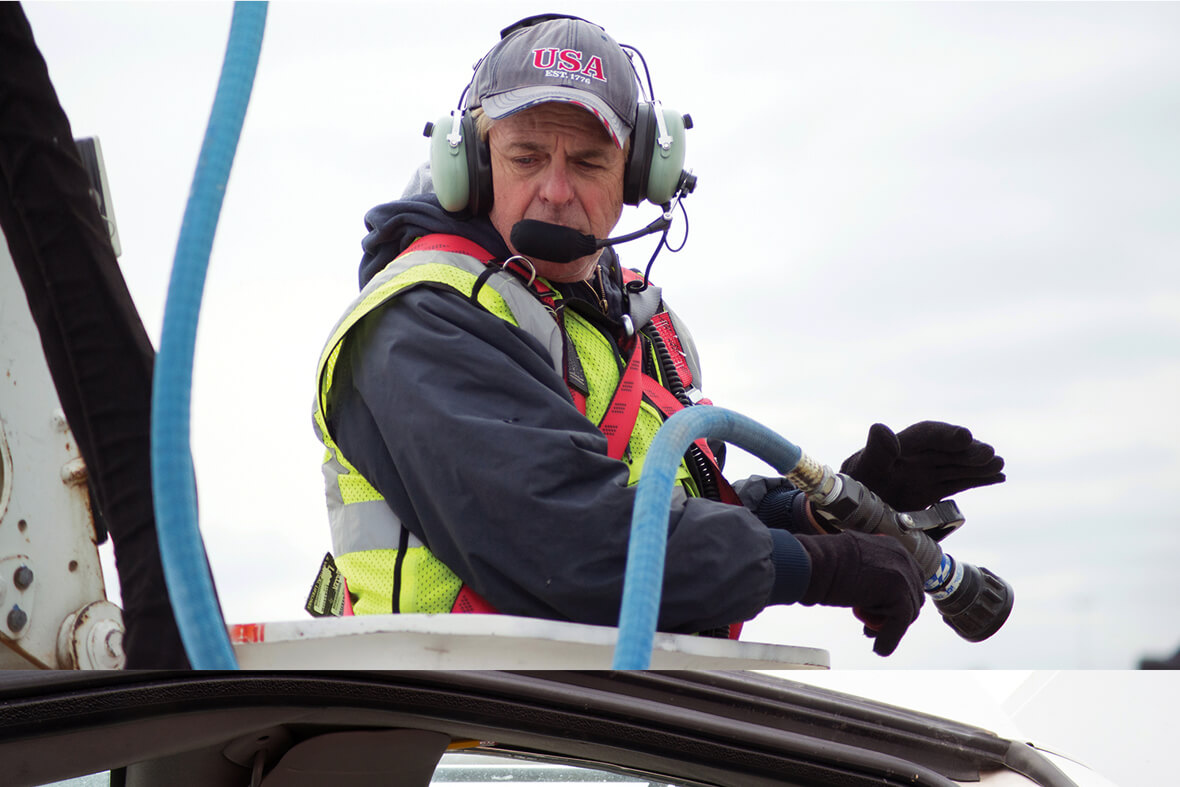 The technology used to de-ice aircraft has remained largely unchanged for many years, but various efforts are being made to improve performance, safety and sustainability – while patterns of demand are shifting, too

The electrification of GSE in general is high on the agenda these days as sustainability guides many business decisions – and on-airport de-icers are by no means exempt. Denmark’s Vestergaard Company, for instance, has introduced electrically operated de-icing trucks to the market.
“We have tested our e-BETAs in several markets over the past winter and that has led to sales of about 20 units to go into operation in both Europe and North America in the coming winter,” says Lars Barsøe, VP sales and marketing at Vestergaard. “Our first smaller, fully electric e-Mini MY Lites will go into operation in two European airports this coming winter.
“The new Elephant e-BETA technology reduces greenhouse gasses and sound emissions and creates better working conditions for personnel,” he adds.
This year, Vestergaard has collaborated with a major handling company to win easyJet’s de-icing operation (of which more below). The manufacturer is also to deliver four Elephant e-BETA de-icers to ground handler Airpro for use at Helsinki Airport this coming winter, making the gateway the first in the Nordics and only the fourth in the world to deploy electric de-icers.
Plus, Germany’s Stuttgart Airport is to receive two of the electric de-icers this season, following successful trials undertaken in 2021.
Suppliers of de-icing fluids are similarly focused on sustainability. At Clariant, Fabio Caravieri, head of global marketing industrial consumer specialties, informs: “We introduced new fluids based on propylene glycol with improved ecotox profile in recent years: the type I Safewing MP I LFD 80/88, and type IV Safewing MP IV LAUNCH PLUS.”
Caravieri observes that de-/anti-icing has matured over the last 15 years, especially on the application side of the task. “New development projects aim at keeping high quality standards but improve on the sustainability aspect such as optimisation of ADF [aircraft de-icing fluid] recycling, or utilisation of green and easily biodegradable raw materials,” he says.
Over-arching such efforts are environmental regulations that must be followed. For instance, ADF is classed as a substance of very high concern (SVHC) in Europe, while Germany has its own classification of substances that are hazardous to water courses.
“The trend is certainly to use more environmentally friendly products,” Caravieri says.
This trend looks set to continue, given that there are at present no feasible alternatives to glycol-based ADF for cleaning contaminated aircraft surfaces of frost, ice or snow.
“Other methods like external heating are simply too slow and consume too much energy. Special coatings usually only work under certain conditions for a restricted period of time. Therefore, a safety programme would still be required prior to every flight, plus a cleaning procedure similar to de-icing,” Caravieri sums up.
There are other ways in which handlers can improve their environmental performance. At Nordic aviation services provider Aviator, managing director Jonas Brundin and head of deice Richard Lundgre remark: “Our Malmö station is CO2 neutral when it comes to the equipment since we only use biofuels. We are also implementing that at our other stations in Sweden.”
Plus, Aviator has invested in prop-mix vehicles instead of pre-mix vehicles, reducing the consumption of glycol, and has started to look at electric de-icing vehicles. “This season we are also changing our fluid supplier to one that uses more recycled fluid, which also reduces our CO2 emissions,” Brundin and Lundgren add.
With several companies specialising in ADF recycling, it seems likely that petrochemical suppliers will increase the share of recycled de-icing fluid in the mix. Alexandre Koenig, chief commercial officer of dnata Switzerland, considers: “There is a cost benefit to this, as well as environmental advantages. But recycling ADF is a complex operation: run-off can be a blend of Type I, Type IV, water, ice… It’s a challenge.”

Communication
It is not just de-icing per se that is becoming more efficient: communication technology for winter operations teams has also matured.
Vestergaard is quite involved in this aspect of de-icing, having had a Data Transmission System since the early 1990s. This allows information on de-icing jobs to flow back and forth between airport operation and the de-icing truck and on to the cockpit crew, Barsøe explains. Precise information on fluid use, mix percentages, time stamps and geo-location is collected automatically.
“Communication around de-icing is very safety-related,” he goes on. “Cockpit crews need to know exactly what mix was sprayed on their critical surfaces and possibly when a hold-over time starts so they can determine when it is safe to take off.”
As many de-icing contracts have an element of litre-/gallon-based invoicing, accurate data is crucial to the communication between customer and provider. Many airports also require exact reports on what fluid was sprayed, how much was collected and how much is run-off for their environmental reporting.
Aviator’s de-icing teams, meanwhile, communicate via its airport radio system and VHF radio system. “We also have IT systems that take care of some of the communication between our co-ordinator and the vehicles regarding what treatment is ordered and to monitor the operation,” Brundin and Lundgren say. “We have been able to remove some manual work with the systems we have but it would be helpful to develop this more.”
One provider of ramp communications systems that has been innovating is Worcester, Massachusetts-based David Clark Company. Echoing Barsøe, systems manager Bob Daigle points out: “There are numerous safety challenges that come into play during a typical de-icing operation. These include the use and handling of hot fluids and high-pressure spray, large de-icing vehicles moving around the aircraft, manoeuvring the boom, and poor visibility. To ensure safety during de-icing operations, clear communication between the sprayer in the bucket and vehicle driver is critical.”
Ground support personnel have used communication headsets for many years in maintenance, pushbacks and other ramp operations. These were initially wired systems (such as David Clark’s Series 3800) that provided clear communications in noisy airside environments. However, wired headset systems have their limitations: they constrain freedom of movement, while adding cords and cables to the ramp environment.
As such, the introduction of wireless technology represents a significant step forward. The David Clark Series 9900 wireless system allows hands-free operation and greater freedom of movement without the worry of tangled wires and cables (or the cost of replacing them if damaged).
Because the system is designed for full duplex communication, spray operators, vehicle drivers and de-icing co-ordinators can communicate with one another at normal voice levels, hands free and in real time, while moving the de-icing vehicle, manoeuvring the boom or handling a high-pressure hose. De-icing crews no longer have to yell at one another or rely on hand signals to communicate over the din of vehicle and jet engines, Daigle says.
Enhanced communication helps de-icing crews work more efficiently, reducing waste and run-off of costly de-icing fluids. Wireless headset communication can also reduce the time required to complete de-icing operations, in turn reducing flight delays as well as making a positive impact on an airline’s bottom line.