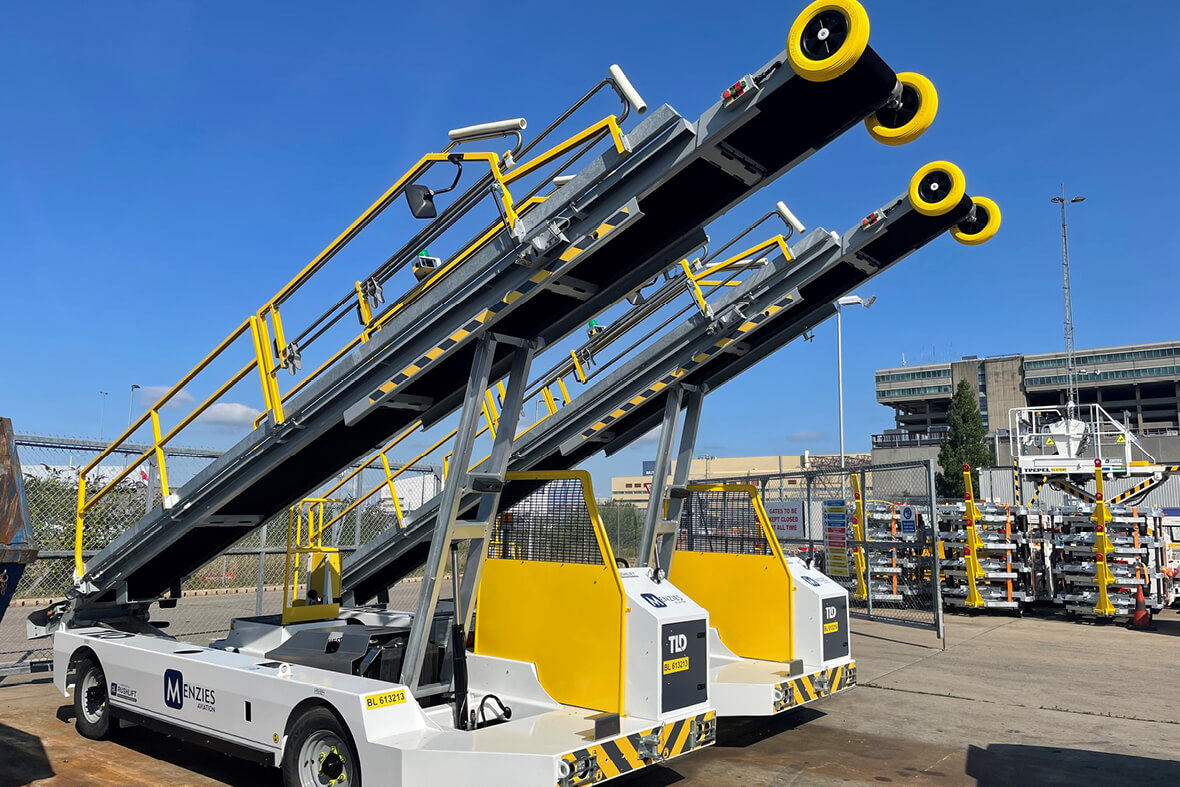 UK-based GSE and materials handling supplier Rushlift has had a very busy couple of years. While many others involved in the aviation industry, and especially in GSE provision, have been cutting back, it has signed new contracts and grown its business at key London hubs

One of the significant deals sealed by Rushlift in recent months was a six-year framework agreement reached with ground service provider Menzies. The deal, signed in July, covers the provision of a wide range of GSE into the Menzies UK network, initially for its stations at London Heathrow and London Gatwick.
Approximately 650 GSE units are to be supplied by Rushlift, including pushback tugs, baggage tractors and carts, high loaders and belt conveyors. The equipment will be sourced from manufacturers such as TLD, TREPEL and TBD, to name just a few, informs Rushlift’s operations director, Tim Willett.
Speaking to Airside in mid-October, Willett explained that some 75% of the equipment to be provided to Menzies for its London Heathrow operation had already been delivered as part of a staged programme that started in January, with the rollout “going as planned”. All the GSE, destined for either Heathrow or Gatwick, is to be delivered by summer 2022.
As well as the equipment itself, Willett points to a number of other factors that might have attracted Menzies to the Rushlift offering. Rushlift boasts airside and landside workshops at Heathrow and Gatwick, for example, ensuring that all maintenance and repair is carried out close at hand, swiftly and efficiently.
Plus, says Willett, the ground service provider is hot on regular reporting from its partners, and Rushlift offers day-to-day updates on its service performance.
In fact, he says, “We work really hard each and every day to ensure we provide a good service. And we approach things just like a ground handler, so we are on the same wavelength as our customers.”

Looking to the future
Another globally active ground handler, Swissport, agreed a deal with Rushlift at the end of last year that covers the maintenance of Swissport’s GSE fleets at Heathrow and Gatwick. That arrangement is “working very well”, says Willett, Rushlift also having refurbished some of the handler’s equipment at the two London gateways.
According to Willett, the Menzies and Swissport deals are illustrative of Rushlift’s confidence in its future, and its ability to pick up new business even at a time when much of the rest of the aviation industry was contracting.
He believes that the sudden collapse of the aviation business in the UK actually gave some GSE operators the opportunity to rethink their business models and operations, and consider their options. And their thoughts would need to take in how they will gear up for the recovery of the industry that is expected over the next couple of years.
Also reflecting Rushlift’s confidence in its present and its future is its new landside terminal at Gatwick. Opened earlier this year in the middle of a UK ‘lockdown’, the facility adds to Rushlift’s growing presence at both Gatwick and Heathrow.
Willett himself is expecting to see a fairly strong recovery next year in the industry, with a return to something like normal operating conditions in 2023. There had in fact been fairly good recovery at Heathrow in the months leading up to October 2021, he points out, although the signs at cross-town Gatwick Airport have been less positive.
All in all, though, Willett is expecting a pretty strong 2022, while “2023 could be a very busy year and we are gearing up for this”.
That might well include growth outside of London. Rushlift has been looking at the potential for expansion at Manchester Airport, for example, while it would also like to be involved in the tender for GSE pooling at Luton Airport that is expected in the not too distant future.
“The next two years we might see further Rushlift growth in the UK, while beyond that we may well be looking at expansion across Europe,” Willett concludes.

Alongside its new business deals, Rushlift has also seen change in its organisational and reporting structure. It started life in April 2013 as a private enterprise before being sold to South Korean heavy equipment manufacturing giant Doosan in 2015, but in June this year it moved under the aegis of Doosan Bobcat – another Doosan Group company that also specialises in engineering vehicles, but is based in the US.
Bobcat is probably best known for its excavators and mini-diggers but the move actually suits the Rushlift model better, says Rushlift’s Tim Willett, given Bobcat’s expertise in leasing and maintenance of equipment.
The move represents a “big opportunity for Rushlift”, he says, most notably in terms of the additional product lines that Rushlift can now offer its customers. For while Rushlift is most noted for its GSE provision, it also does much more than that to support the UK’s aviation sector: it supplies Boeing UK with hangar equipment, for example, and provides various types of engineering equipment for Virgin Atlantic.
Willett is also confident that Doosan Bobcat is more than keen to support Rushllift’s plans for further growth with investment as and when required.