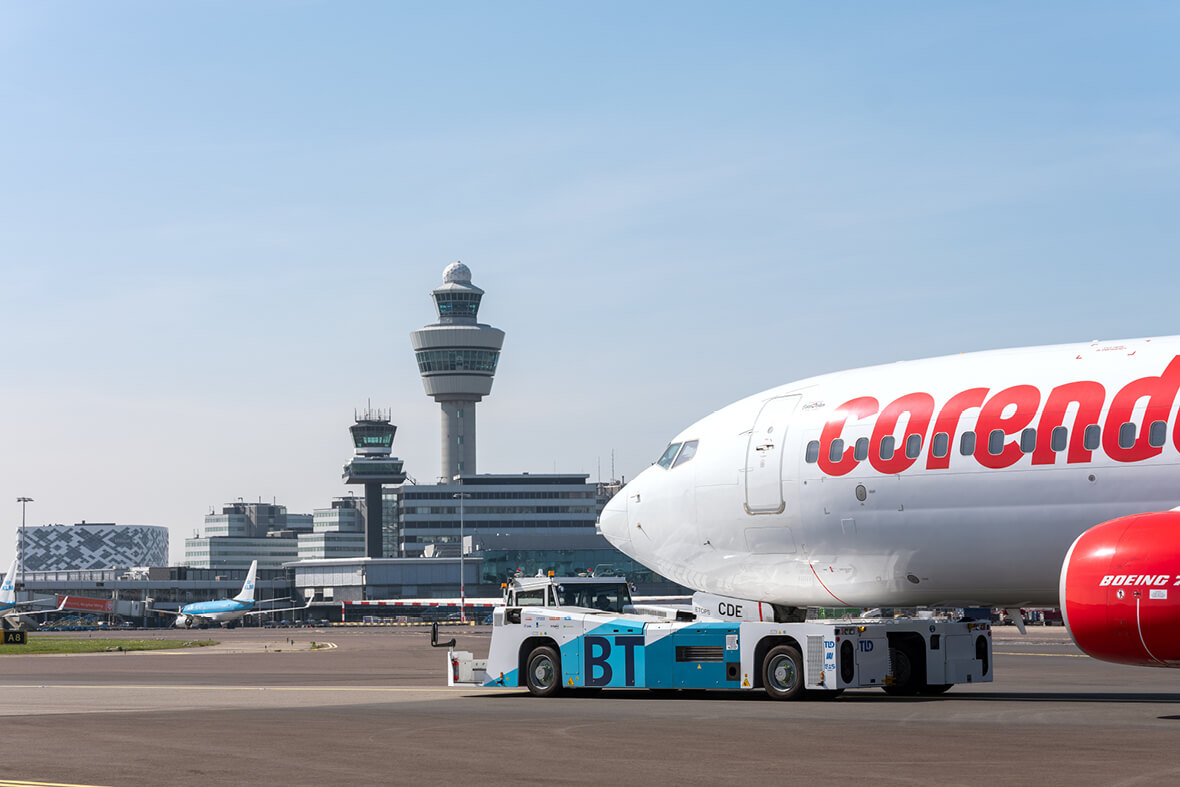 Royal Schiphol Group, operator of Amsterdam Airport Schiphol (amongst others), has confirmed that it will buy two TaxiBots to support its efforts to achieve sustainable taxiing at the Dutch gateway

TaxiBots are semi-robotic, pilot-controlled tow tractors that are designed to make taxiing operations cheaper and more environmentally friendly by enabling aircraft to keep their engines largely switched off during the taxiing process. The two units are expected to be delivered to the Netherlands’ biggest and busiest air gateway in mid-2022.
Schiphol will be Europe’s first airport to use the innovative systems, which are the product of Israel’s IAI and GSE manufacturer TLD (part of Smart Airport Systems). A small number of TaxiBots are already in use at two Indian airports.
A previous trial at Schiphol demonstrated that sustainable taxiing led to a reduction in fuel consumption of approximately 50% during the taxiing process, saving money on fuel and lowering carbon dioxide, nitrogen and ultrafine particle emissions.
Royal Schiphol Group has said that it wants to operate “the most sustainable airports possible”, and is targeting having an emission-free ground operation at its Dutch airports by 2030.
The investment in the TaxiBots forms part of its wider plan to minimise harmful emissions. According to Dick Benschop, CEO of Royal Schiphol Group: “2022 is a crucial year for sustainability in the aviation sector.
“We are accelerating measures to reduce emissions and improve local air quality. That’s important for the climate, our employees and local residents. We’re Europeans first and one of the few airports worldwide working on implementing sustainable taxiing on a large scale. Schiphol is a frontrunner, which makes me proud.”
Schiphol has worked with Air Traffic Control the Netherlands (LVNL), KLM, Transavia, Corendon Dutch Airlines and ground handling companies dnata and KLM Ground Services on a plan that is designed to see sustainable taxiing become standard procedure at the airport.
The first step will be the deployment of the two TaxiBots for follow-up trials at Schiphol, in which carrier TUI and ground services providers Viggo and Swissport will also be involved. These trials will transition into standard procedure at the airport, with certain types of aircraft taxiing sustainably to and from Schiphol’s Polderbaan runway.
Modifications to infrastructure at Schiphol are already being made to enable sustainable taxiing to and from the Polderbaan. These changes are to be finished before the follow-up TaxiBot pilot gets underway.
Modifications will include the addition of markings on the asphalt that ensure aircraft stop in the right place when they disconnect from the towing vehicle. Roads also need to be widened to enable TaxiBots to drive to and from the Polderbaan before and after taxiing has taken place without disrupting other (taxiing) traffic.

Building on past results
Carolijn Schoofs, head of innovation at Royal Schiphol Group, recalls the previous TaxiBot trials at Amsterdam: “Schiphol and its partners carried out a sustainable taxiing trial in spring 2020. During this trial, aircraft were taken to and from the runway by a TaxiBot, which enabled aircraft to keep their engines off for most of the taxiing process.
“Given the distance involved, fuel savings can reach up to 65% percent when aircraft taxi to the Polderbaan, Schiphol’s runway with the longest taxi time.”
But these later tests and the ensuing widespread roll-out of sustainable taxiing will require what Schoofs describes as “radical modifications to infrastructure, processes and technology” at Schiphol.
“Many of these modifications are new to the aviation sector, and Schiphol is the first airport in the world that wants to introduce sustainable taxiing on a large scale,” she says. The roadmap described above aims to make sustainable taxiing standard procedure at Schiphol by 2030 at the latest.
The forthcoming trials will occur over a period of three to four months and are expected to start before the end of summer this year. The goal is to perform multiple runs during different types of weather conditions and changing intensities of traffic, Schoofs explains. These missions will include operations for all available aircraft types and apply to both the inbound and outbound taxiing process.
The trials will certainly involve narrowbody A320 and B737 aircraft and will be integrated within normal operations at Schiphol. The feasibility of sustainable taxiing as determined by these trials will include the impact on ATC procedures and requirements, and identification of potential future developments to support ATC.
Schoofs continues: “Our ambitions for the roll-out of standardised sustainable taxiing operations are very clear, and detailed by our roadmap Sustainable Taxiing. As with any radical innovation, many of the specifics and exact characteristics of the solution aren’t yet (fully) understood. But as part of our second feasibility study, this trial will help us test many of our key hypotheses and serve as a platform to learn as much about the concept and our future plans as possible.
“To have a fully standardised sustainable taxiing operation at one of the largest European airports will certainly require a substantial number of TaxiBots or other vehicles. The operating entity, its business model and underlying financial streams are all part of the steps we are concurrently taking to learn more about realising this ambition.”