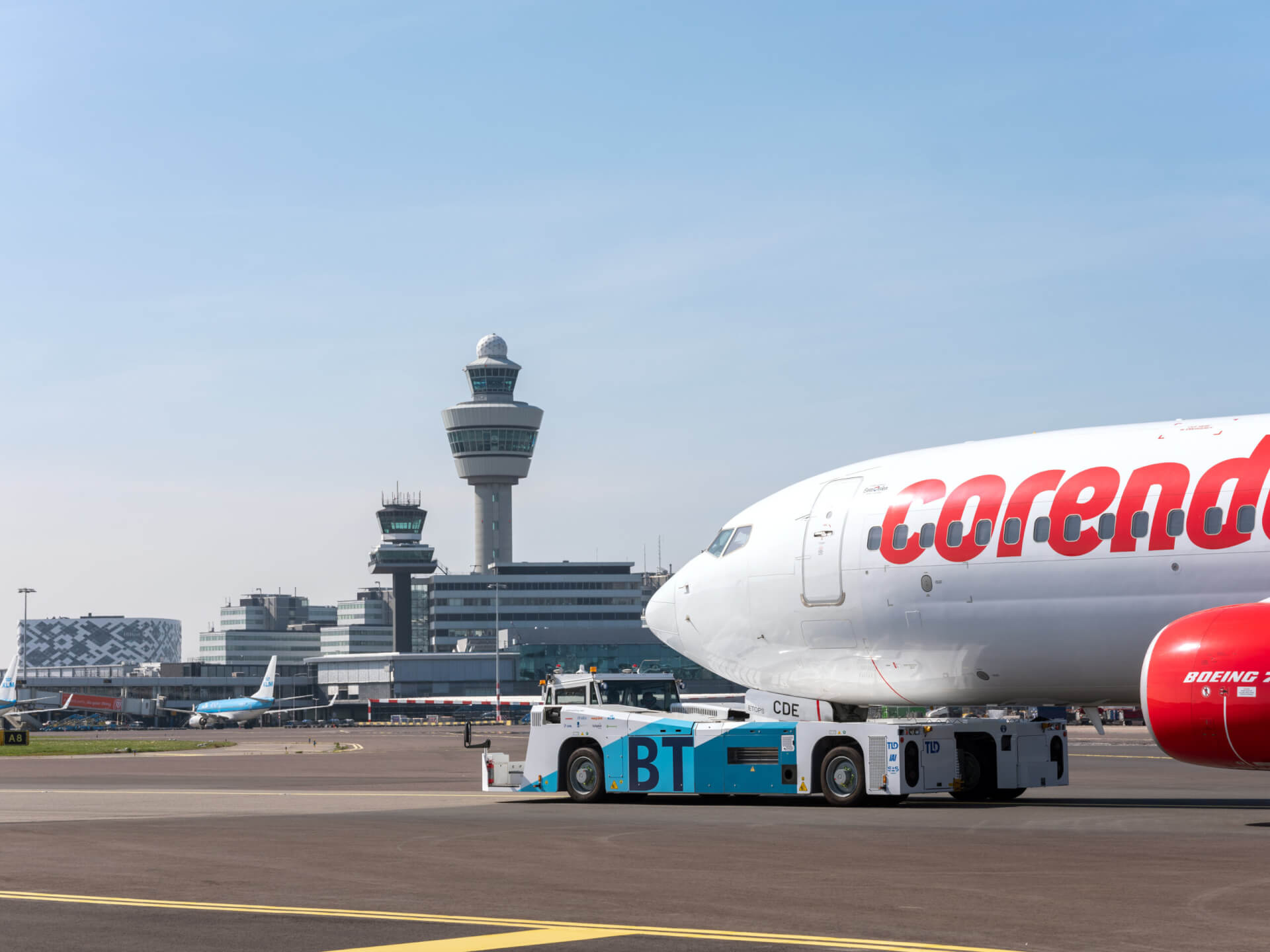 As part of its wider effort to minimise harmful emissions, Amsterdam Airport Schiphol has this summer played host to TaxiBot towing trials as it considers more sustainable aircraft taxiing alternatives

In late April, Amsterdam Airport Schiphol, operator of the Netherlands’ biggest air gateway, announced that it would be hosting trials of TaxiBot. TaxiBot represents a different alternative to standard aircraft taxiing systems, one in which towing is remotely controlled from the flight deck of the aircraft.

The benefits of the TaxiBot system, which enables an aircraft to be conveyed from gate to airport runway without the need for the aircraft’s engines to be running, are many – not least in terms of the cost savings and lower levels of harmful emissions achieved through the reduced use of aircraft fuel during taxiing. Schiphol is investigating its advantages in collaboration with a number of partners.

The tests, which were ongoing at the time of writing at the end of July (they were expected to continue until at least mid-August), involve a number of interested parties. Players have included Netherlands Air Traffic Control (Luchtverkeersleiding Nederland, or LVNL), the Dutch Ministry of Infrastructure and the Environment (Ministerie van Infrastructuur en Waterstaat), dnata and KLM Ground Services (handlers at Schiphol) and three of the big airlines at Schiphol: Dutch flag-carrier KLM, Dutch low-cost carrier Transavia and charter carrier Corendon Dutch Airlines (sister airline to Turkey-based Corendon Airlines).
Paris-headquartered Smart Airport Systems was the supplier of the TaxiBot; part of the Alvest Group of aviation companies, it is a sister company to TLD, which together with Israel Aerospace Industry (IAI) has been behind the development of the TaxiBot semi-robotic taxiing system.

Smart Airport Systems believes that a saving of up to 85% in fuel consumption can be achieved when using TaxiBot’s own hybrid diesel-electric engine in place of an aircraft’s own engines during the taxi process, while Schiphol apparently expects to achieve a total saving of between 50 and 85% on fuel consumption during taxiing because aircraft engines do still need to warm-up for a few minutes before take-off.

Hassan Charaf, head of innovation at Royal Schiphol Group, comments: “This study aligns with our ambition to be the world’s most sustainable airport.

“We are continuing with this important test despite the situation that the corona crisis has caused. I am proud that Schiphol and its partners are investigating what sustainable taxiing at Schiphol can mean.
Freek van der Pal, managing director of Corendon Dutch Airlines, adds: “This project is a perfect fit within our sustainability policy.

“Our ambition is to reduce Co2 emission levels and to work together with our partners in chain to make the aviation industry more sustainable. The first tests with our plane went well. Therefore, we hope for a positive outcome from the trials and that we and our partners can roll it out in the near future.”

Trials began with the towing of an empty aircraft in just the same manner that a tow truck would tow a trailer. Then, they progressed up to pilot-controlled remote taxiing while additional complexities were introduced on a phased basis. For example, mid-July saw night-time trials to test the effect of lower levels of visibility. In the last phase, commercial flights with passengers on board are taxiing using the TaxiBot system.

The trials have been “very practical in nature”, Metz notes. Up to now, “We have been very happy and impressed with the results achieved by Schiphol, especially since trials were in the midst of Covid-19 crisis,” he adds.

“It has been great to work with Schiphol as a partner in this project. They are so committed to reach their sustainable objectives. On top of this, they have strong know-how and ability to get all the stakeholders at the airport involved and enthusiastic about this trial and its evaluations.

“That has allowed us to get real 360-degree feedback from all the key players contributing to the TaxiBot operation. For us, that has confirmed that TaxiBot is a solution that is ready today to bring direct and real emission reductions for airlines and airports.”

Measurements are being undertaken during the trials to see what fuel savings can be made through lower aircraft engine run times. These translate to a reduction of Co2 emissions, while reductions in nitrogen emissions are also achieved – a not inconsiderable concern in the Netherlands right now, where No2 emissions are a particularly sensitive political/environmental issue.

Sustainable taxiing is seen as a potentially important part of the mix of measures that might be introduced into the Dutch aviation sector to minimise harmful emissions of both No2 and Co2. Moreover, as well as savings on emissions and fuel costs, TaxiBot also cuts down on noise on the ramp, particularly benefiting the handlers operating on a busy airport ramp on an ongoing basis.

TaxiBot is already in operation in India, at Delhi and Bangalore Airports. Air India is using a small fleet of TaxiBot vehicles to tow aircraft at these busy hubs. The Schiphol trials have added a lot of publicity on top of that. Metz is already noticing the extra interest that has been generated by these trials amongst other airport operators. More and more airports are – he says – starting to realise the potential of the TaxiBot in helping them to achieve their environmental and sustainability objectives.