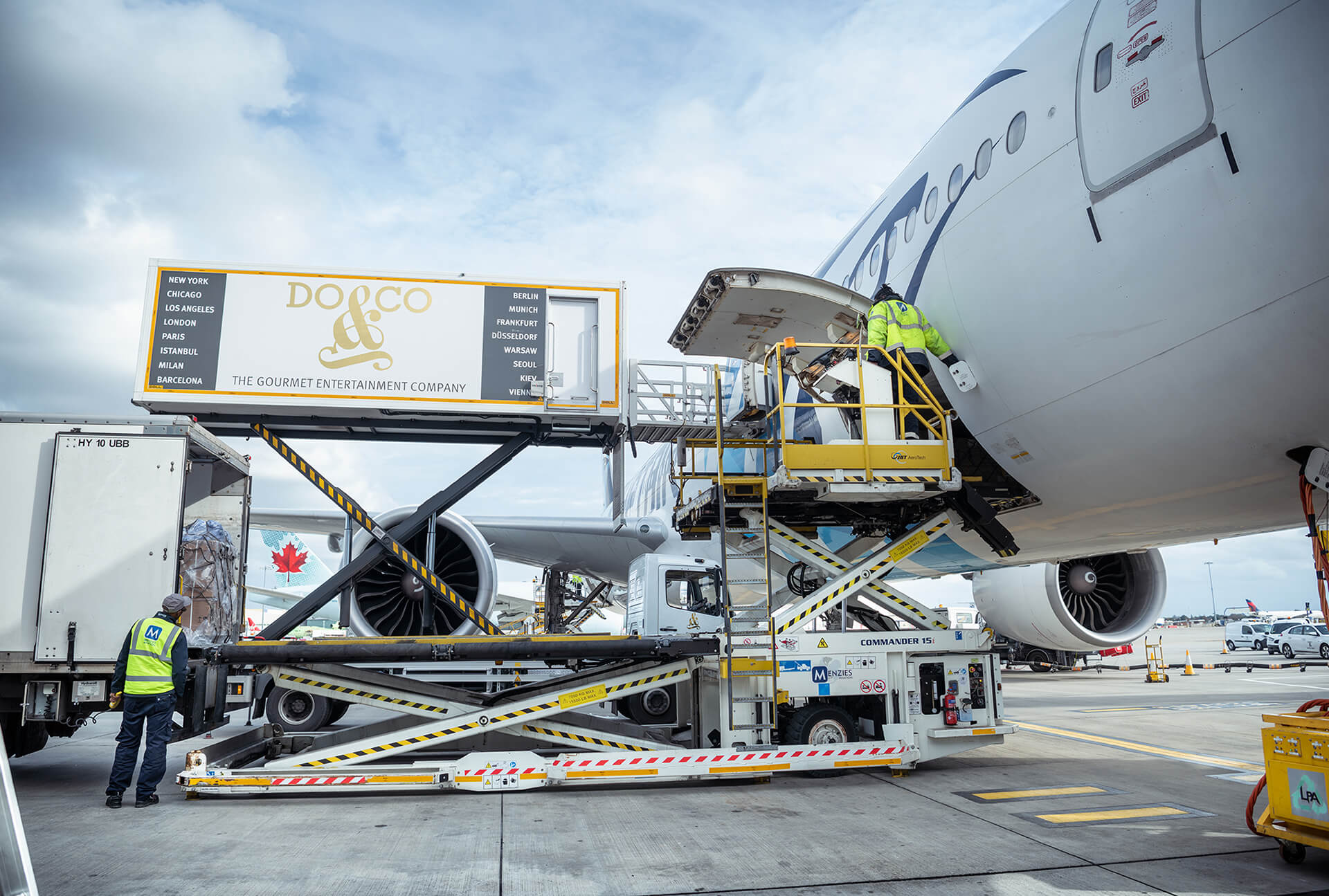 Sustainability has been top of the agenda among users of high lifts and loaders in recent times, with electric units gaining momentum. Are customers still willing to invest in such equipment, or has the ‘green’ agenda taken a back seat in light of the immense disruption caused by Covid-19?

Despite the best of intentions, the aviation community had to reassess its priorities dramatically in 2020 when Covid-19 took hold, resulting in a devastating drop in demand for air travel.

Similarly, TREPEL Airport Equipment managing director Carsten Schimkat confirms that while demand for lower deck loaders, pushbacks and other types of GSE took a hit, business for maindeck loaders has been steady thanks to the continued stability of air cargo demand during the pandemic.

He explains: “Many passenger aircraft have been grounded during the pandemic. Usually, a lot of cargo is transported in their bellies; cargo aircraft have had to compensate for that lost capacity, which has meant maindeck loaders have been in demand.”

Furthermore: “A lot of ground handlers and airlines have been trying to prepare for the Covid-19 vaccine, which needs to be transported by air cargo in chilled containers,” Schimkat continues. “One customer placing an order with us for maindeck loaders said they were needed in particular for the increased business expected in relation to vaccine transportation.”

The level of investment in GSE varies from one country to another. For instance, TREPEL does a lot of business in China, which has been “back to normal” for four or five months now, Schimkat says.

The opening of new airports such as Beijing Daxing International Airport (which began operations in September 2019) has also generated demand for new high lifts and loaders in recent times, Langlois adds.

A change of pace?
The combination of severe economic challenges and continuing uncertainty about future volumes make capacity planning and investment decisions very difficult at present, with the result that the switch from diesel to electric GSE has generally slowed during the pandemic, according to Simon Batt-Nauerz, managing director at AeroGround Berlin.

With the industry in crisis and flight volumes subdued, the main focus in the short term remains on cash preservation.

Still, long-term environmental targets have not been consigned to the (recycling) bin. GSE is a major contributor to a handler’s carbon footprint, so moving away from diesel models is vital to reducing its environmental impact. High lifts and loaders have not been left behind.

Examples of electric loaders include JBT AeroTech’s Commander 15i and Commander 30i, as well as TREPEL’s CHAMP 140, Challenger 150 and Challenger 280.

Highlighting the benefits of electric equipment in terms of environmental performance and the health of staff on the ramp, Menzies Aviation senior vice president, GSE Stephen Gallagher adds: “Whilst the up-front investment is at present more expensive than conventional vehicles, the total cost of ownership is reduced due to lower maintenance requirements and levels of availability on the ramp, which makes electric models an attractive option from a cost efficiency perspective as well.

“The main limitation to increasing the electric fleet is that the more electric assets are introduced to the apron, the more pressure is placed on the supply network,” he continues. “To overcome this challenge, it is essential that ground handlers and airport operators work closely together to improve the airport infrastructure.”

At Berlin Brandenburg Airport (BER), which opened on 31 October 2020, this is a work in progress, observes Batt-Nauerz.

But: “For a fully electric GSE fleet, charging infrastructure has to be extended. Prior to the opening of the new airport, improvements in infrastructure took place. Yet more has to be done in order for the ground handlers [there] to completely switch from diesel to electric.”

AeroGround is keen to play its part in reducing emissions at Berlin Brandenburg Airport; it has invested in electric-drive GSE, such as electric high loaders, mainly working with Laweco and TREPEL models.

Already: “Due to the move to BER and the new ground handling contracts with the Lufthansa Group and Eurowings we were able to significantly invest in our ground handling equipment,” Batt-Nauerz says. “We increased our fleet with new modern equipment, such as maindeck high loaders, ground power units [GPUs] and towbarless pushback trucks, and also exchanged older equipment for new.”

It could even be said that the pandemic has presented an opportunity for step changes including the introduction of more sustainable handling practices, Gallagher points out.

TLD, for instance, has seen sustained interest in its electric models. Its battery-powered loaders, called reGen because of their energy regeneration capabilities, were introduced more than 10 years ago and are improved every year with new features and added efficiency.

“2020 was not the exception and was the first year where the sales of electric loaders overcame the sales of diesel loaders,” Langlois says.

TREPEL, too, has seen increased interest in electric or electrified maindeck loaders. “We’ve sold quite a few of these over the past eight months,” says Schimkat (speaking in January). “So I don’t think the Covid-19 pandemic caused interest in electric GSE to fall.”
Menzies is certainly maintaining its emphasis on sustainability. Besides its ongoing shift towards electric GSE, the handler continually reviews the operation of its equipment using “the latest telematic technologies as well as advanced schedule planning and resource allocation tools to ensure that each asset is used and operated to the highest level of efficiency, to reduce any unnecessary emissions”, Gallagher says.

Plus: “As a global player we work closely alongside all of the OEMs [original equipment manufacturers], sharing our wealth of experience and expertise that we have built up over the course of many years. This drives the highest levels of efficiency that we need from each asset, along with the highest safety standards possible,” Gallagher declares.

Like Menzies, AeroGround appreciates the importance of understanding how equipment is used and when it needs maintenance.

Of course, this is not possible without smart GPS tracking and analysis software, Batt-Nauerz notes. This is one area in which the handler is testing new systems and technologies in partnership with manufacturers.

“GPS tracking would allow us to locate our GSE better and use it more efficiently. We would also be able to know which high loader has to be charged or checked on by our maintenance team. For passenger steps or GPUs we are able to charge our customer by the minute in order to ensure that GSE is only paid for when in use. We can also evaluate the life cycle of GSE better,” Batt-Nauerz adds.

Flexibility
Manufacturers have been keen to keep innovating through the pandemic. For instance, CIMC Air Marrel expanded its range of ‘green’ equipment last year with the addition of new battery-powered catering trucks, cargo loaders and apron buses (as reported by Airside International, 4 September 2020).

At TREPEL: “We are using this quiet time to prepare for when business comes back,” Schimkat says. “The overall decline in orders has left us with more capacity in our engineering department, which we are using to work on new developments and products (which we are not ready to reveal just yet).”
Elsewhere, Langlois says: “Even with the market drop, TLD continues to invest massively in engineering to develop new products and features. Our ASD+ system, which is a docking assistance system that controls the loader during docking, is now fully ready for deployment.

“More automation is certainly the future of loaders and TLD is really pushing in that direction by working on more advanced docking systems and some automated operating sequences. The idea is not necessarily to have a fully autonomous loader, but to simplify and ease the operator’s role while ensuring he/she remains in control with more safety.”

Plus, the company has developed some new products specifically in response to the changes in aircraft use during the pandemic.

Its Cargo Chute facilitates the unloading of packages from the passenger cabins of aircraft that are transporting freight – so-called ‘preighters’.

The chute is mounted onto passenger steps (it can be fitted to new steps or retrofitted to existing units of almost any make); handling staff can still use the stairs to access the cabin, and slide packages down the chute. JBT says this solution improves safety and efficiency of unloading by reducing the physical strain on staff, cutting manpower requirements and increasing the speed of unloading.

The JBT Cargo Chute can be used in conjunction with the company’s roller-bed, which facilitates the movement of goods from inside the aircraft.

No permanent modification to passenger steps is necessary, making this a usefully flexible solution in times of fluctuating passenger demand when many airlines have sought to bolster their income and keep their passenger aircraft flying by supporting the ever-growing e-commerce market.

Products like these are designed to allow companies to adapt to changing levels of demand as a result of a specific challenge. In general though, even under less unusual circumstances, handlers also try to keep their fleets adaptable by achieving the right mix of permanent and temporary assets. A balanced mix between leasing and purchasing new equipment is key.

Besides the lesser demand for lower deck loaders due to reduced passenger flights, and the slight rise in the need for maindeck loaders to keep freight moving, Bunting notes there has been “a large number of hired rental models available on the market” since Covid-19 emerged.

He adds: “We’ve seen an increase in short term rental enquiries, for example up to 12 months, and longer term lease requests.”

At AeroGround: “I believe we have a healthy mix between purchased GSE, which allows us the necessary stability, and leased GSE, which we can adapt more easily in times of uncertainty,” Batt-Nauerz says.

Since investing in new units to serve its clients at Berlin Brandenburg Airport, AeroGround has not made any major plans to increase its fleet.

“The Covid-19 pandemic unfortunately does not allow us to pursue long-term investment plans. We hope to be able to invest more in new equipment once air traffic increases and we can be more certain about the future developments of flights,” Batt-Nauerz says.