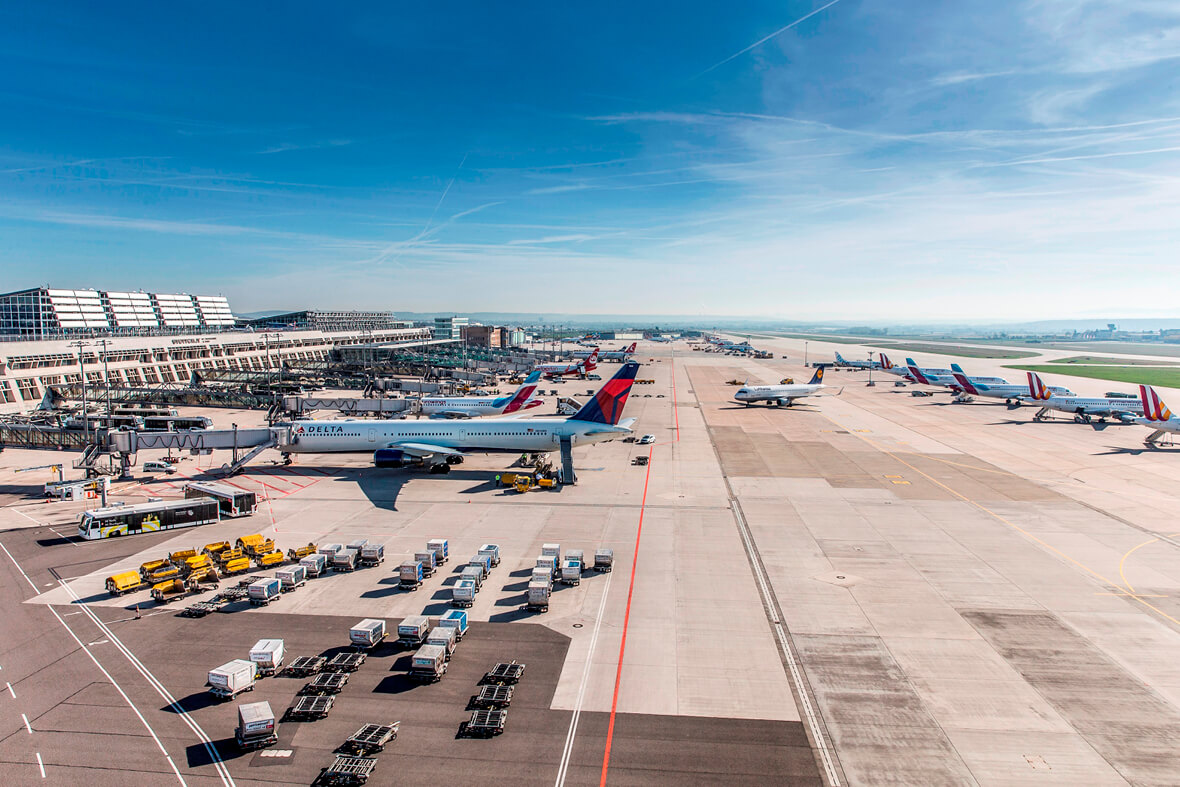 Early this year, initial trials of an autonomous baggage tug began at Stuttgart Airport as part of the gateway’s wide-ranging ambitions to modernise GSE operations at the gateway by implementing a high degree of GSE electrification (the efleet programme), as well as exploiting the potential of autonomous equipment (the SmartFleet programme)

The tug, manufactured by Germany’s VOLK Fahrzeugbau, can drive certain routes across the apron independently. The trials at Stuttgart, which represent the first testing of an autonomous baggage tug at a German airport, are examining capabilities including navigation to a pre-defined destination, lane keeping, obstacle detection, acceleration and braking.

The vehicle is fitted with four 3D cameras, with infra-red capability for night vision, two safety laser scanners and a highly precise GPS system. As a result, the tractor knows its location to within 2cm. The new tug also complements the airport’s growing electric GSE fleet: a lithium-ion battery supplies its power.

In its early phases of testing the tug has continued to be manned, an operator remaining near the controls to stop the tug if required for safety reasons.

The SmartFleet project, which is examining the prospects for using autonomous commercial vehicles for safe and efficient airport operations, is funded by the German Federal Ministry for Economic Affairs and Energy. Besides Stuttgart Airport and VOLK, the vehicle manufacturer Aebi Schmidt Germany also forms part of the consortium. The research project is funded to the value of 3.9 million euros (US$4.6 million).

Deliverables
Martin Hofmann, SmartFleet project manager at airport operator Flughafen Stuttgart, confirms that testing of the as-yet unnamed autonomous baggage tractor at the German gateway is the latest stage in a process of collaboration between Stuttgart Airport and VOLK that has been ongoing since 2019.

The two partners worked together in the very first stage of GSE electrification at Stuttgart Airport, which formed part of the gateway’s efleet project, which was launched in 2013 (covered in Airside previously; see , for example, https://www.airsideint.com/issue-article/stuttgart-looks-to-a-greener-future/). Just five years later, the entire baggage tug fleet at Stuttgart had become fully electric.

SmartFleet is a research project with two prototype applications: a) winter service and b) baggage/cargo transportation. Flughafen Stuttgart expects to use the outcomes of the project to steadily increase the degree of automation in its ground fleet. And it will have a close look at other suitable ground handling processes too.

GSE manufacturer Aebi Schmidt Group’s part in the programmme relates to the winter service aspect. It is working on autonomous jet sweepers for winter maintenance, and these are also soon to be tested at Stuttgart Airport.

“The common goal is to develop self-driving commercial vehicles that are safe and efficient to use at the airport,” Hofmann remarks, adding that the first trials of an autonomous winter maintenance vehicle developed within the SmartFleet programme will probably take place this year.

There are currently two ground handling firms working in baggage handling at Stuttgart. Flughafen Stuttgart subsidiary Stuttgart Airport Ground Handling is one of them and it, too, is bringing its ground handling expertise to the ongoing SmartFleet programme and the trials at Stuttgart.
The research project ends in 2022. Trials at different stages of automation will take place at Stuttgart until then, Hofmann confirms. For the moment, the deliverables that the partners hope to see from the trials are:

Analysis of different operational uses, such as outdoor operation on the apron as compared to indoor operation in the baggage basement; intersection and crossing traffic with other GSE, passenger buses and aircraft; autonomous hitching of baggage trailers; and so on
Autonomous navigation and routing
Study of the effects of automation on the working environment
Study of the effects of automation on handling processes and workflows
Investigation of alternative approaches to a fully-automated future scenario, including consideration of suitable intermediate steps

“Autonomous vehicles have the potential to make ground handling processes more efficient and safe,” Hofmann asserts. “The traffic situation on the ramp is challenging and ground handling employees have a tough job – it is physically hard work. Self-driving GSE could support them in the future.

“[Autonomous] GSE could even contribute to accident prevention on the ramp. While humans can make mistakes when not fully concentrating, perhaps due to extreme weather or tiredness, these machines will be less influenced by such conditions.”