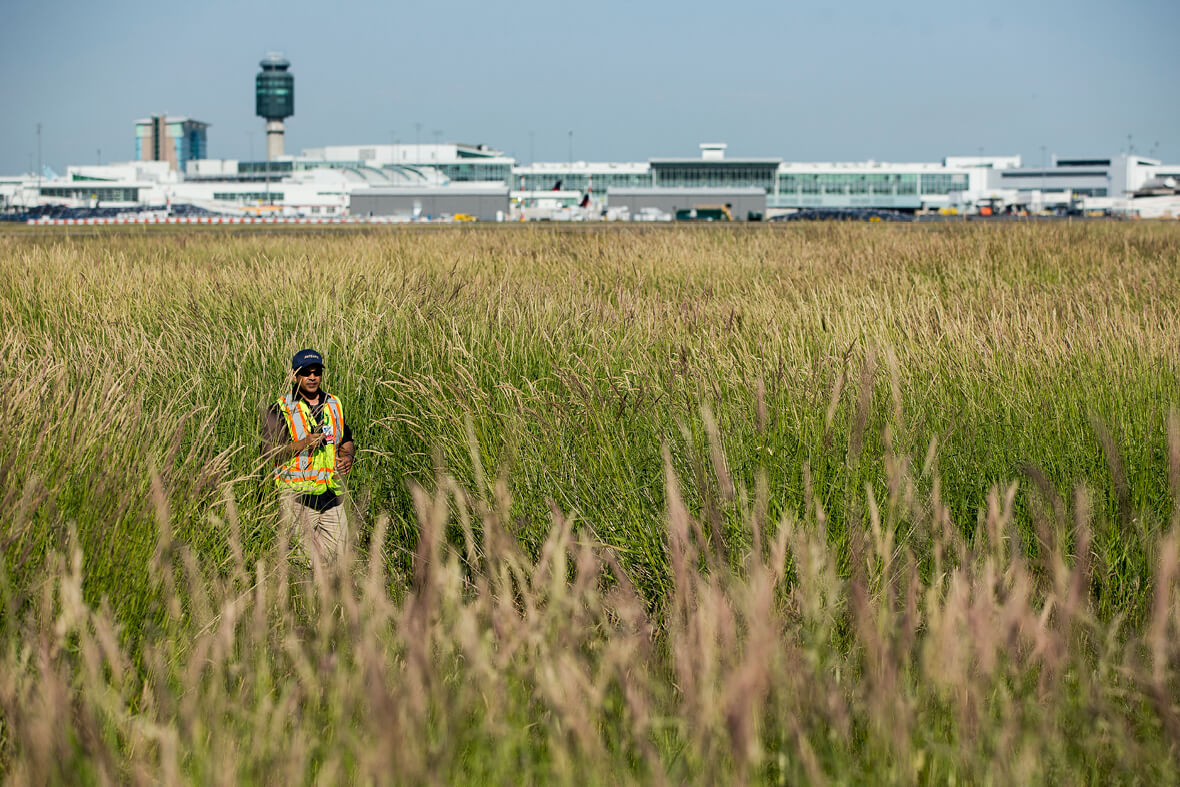 Sustainability has become a key consideration for airport operators, just as it has for most other parts of the aviation industry. As well as being another element in ensuring that all airside operations are carried out safely and efficiently, it also means taking care of and managing the local habitat and its wildlife

For most airports, wildlife and habitat management forms part of a much wider remit than is generally recognised. A spokesperson for Airport Authority Hong Kong (AAHK), operator of Hong Kong International Airport (HKIA), explains this succinctly: “AAHK has a public service responsibility, which goes beyond revenue and financial performance, to focus on the public good and the community.”
As such, sustainability is regarded as a key element of HKIA’s ongoing operations. Its sustainability initiatives incorporate a broad array of responsibilities, including wildlife and habitat management.

AAHK adopts, it says, an “airport-wide” approach to environmental management; this entails working closely with its business partners to manage, reduce and mitigate HKIA’s environmental impact. Its Sustainability team members work on marine and terrestrial ecology and biodiversity issues. It also handles other environmental matters, such as carbon reduction – another big focus of the airport operator.

Partnership
“As a significant proportion of HKIA’s environmental footprint is beyond AAHK’s direct control, we place particular emphasis on encouraging our business partners to participate in our environmental programmes,” the airport spokesperson says.
For AAHK, “On-airport habitats are managed with the aim of balancing a visually pleasing and colourful landscape for airport users with a safe airfield where birdlife is deterred from important operational areas. While on-airport habitats are carefully managed, AAHK also strives to avoid and minimise operation and works’ impacts on biodiversity,” the spokesperson continues.

AAHK has implemented a range of ecological enhancement and conservation initiatives to help protect and enhance important marine and terrestrial ecology and habitats.

In fact, in conjunction with several of its airport development projects, AAHK has made substantial commitments in numerous areas relating to habitat and wildlife management over the years, including the creation of a marine park of about 2,400 hectares, intended to link existing nearby marine parks to form a large interconnected protected area of around 4,500 hectares in waters near the airport.

AAHK is also working to enhance marine ecology and fisheries for the benefit of the marine environment in North Lantau waters (HKIA is an island in its own right linked by road and rail connections to the bigger Lantau Island) and beyond – including for the benefit of the local Chinese White Dolphin (CWD), which uses waters near HKIA as part of its range in the Pearl River Estuary.

In late 2016, AAHK established a Marine Ecology Enhancement Fund (MEEF) and a Fisheries Enhancement Fund (FEF) with an investment of HK$400 million (US$51.6 million), and these funds have collectively funded over 30 projects with a total value of over HK$44 million ($5.7 million) up to 2020-21.

Numerous projects have helped preserve the local wildlife habitat: not just the conservation ecology of CWDs across the Pearl River Estuary, but also programmes designed to optimise the value of peri-urban and small-scale mangrove forests in the Pearl River estuary as fish habitats.
Larger animals that are indigenous to Lantau Island (such as wild boar, porcupines, deer and others) rarely intrude on the managed airport landscape environment and therefore pose no risk to people working at or using the airport. However, AAHK confirms that it will continue to support and fund diverse research and conservation efforts that may help to improve wider understanding of important ecological resources in western Hong Kong and ultimately inform broader conservation efforts.

One such ongoing project it supports aims to strengthen measures to conserve the Tung Chung river catchment area right next to the airport. It seeks to engage the local community in raising awareness of the importance of protecting the ecology of this region.

The airport operator’s pledge to become the world’s greenest airport serves as a goal and a driver to continuously improve HKIA’s environmental performance, it says, only part of which is wildlife and habitat management. As such, AAHK has a comprehensive sustainability strategy in place that includes initiatives aimed at reducing the airport’s carbon emissions and reducing energy, as well as projects that serve to increase recyclables separation and reduce the quantity of airport waste sent to landfill for disposal.

Across the Pacific
On the other side of the wide expanse of the Pacific, western Canada’s Vancouver Airport also regards wildlife considerations as a vital part of its overall strategy. Indeed, says David Bradbeer, a wildlife program specialist at the Vancouver Airport Authority (VAA): “At YVR [Vancouver Airport], our primary objective is to build, operate and maintain a safe, secure and environmentally sustainable airport, which is why we have one of the most dynamic airport wildlife management programmes in the world.”

Vancouver Airport is located on Sea Island, a few kilometres from the city it serves, and this places it in a unique sort of environment. Sea Island’s proximity to the Fraser River delta also means that it is home to several local bird species, as well as migratory birds. “We have a responsibility to ensure safe aircraft operations while conserving wildlife,” says Bradbeer. To that end, a dedicated YVR Wildlife team patrols the airfield year-round.

For Bradbeer and his colleagues, “Habitat management is any manipulation of the airfield environment to make it less attractive for hazardous birds. YVR’s approach to habitat management models a Safety Management System. Risk assessments are necessary to determine which species pose the greatest hazard, and root cause analysis is used to determine how these animals use habitats at the airport.

“For example, we identified gulls and dabbling ducks as hazardous species based on a tabulation of strike events and their prevalence in bird surveys. Shortly after, we developed an integrated pest management programme to target several invertebrate species that make up the diet for these gulls and ducks. Special consideration was required to choose an insecticide that would meet the approval standards of YVR’s Salmon Safe certification,” he informs.

Managing bird and other wildlife populations is also on the radar at Denver International Airport, in Colorado in the US. The airport authority there – which works under the aegis of the City & County of Denver Department of Aviation – takes managing the risks wildlife pose to aviation and human safety very seriously.

That responsibility encompasses aspects of habitat management, wildlife exclusion, hazing, partnership and education, explains the airport authority, through its collaborative team of operations staff, its sustainability team and US Department of Agriculture (USDA) employees.

DEN’s habitat management includes managing, or excluding, the three basic needs of all wildlife – food, cover and water. Each of these needs is different for each individual species found within the greater ecosystem. Excluding or removing cover (such as mowing, installing security grates on culverts, removing trees and so on), as well as mitigating or managing water sources, form the keystones to DEN’s approach, it notes.

Reduction of food availability is also regarded as important, and includes education of the public and airport employees about properly disposing of waste and keeping worksites clean.

Habitat management – the reduction of suitable wildlife habitat on airport property – by its very nature reduces wildlife’s attraction to the airport; thereby, preserving the wildlife that might otherwise become a strike risk. DEN also participates in hazing/harassment of wildlife and a trap/relocate programme to move many species away from the airport environment.

Change over time
AAHK has been expanding the scale and coverage of its environmental initiatives over time to include more participants and aspects of the environment. As noted above, the airport authority has moved beyond areas under AAHK’s direct sphere of control to proactively engage with airport business partners, multiplying its beneficial impact through various community-wide initiatives.

“We believe developing a robust culture of sustainability throughout the organisation and in the airport community will strengthen our ability to operate and grow in today’s fast-changing environment,” the authority asserts.

HKIA has also been mindful of environmental and habitat issues while developing and expanding the airport. For example, for the extensive Three-Runway System (3RS) project, a comprehensive Environmental Impact Assessment was completed with wide-ranging environmental mitigation measures and environmental enhancements stipulated in an Environmental Permit.
These commitments are relevant for the construction phase of the 3RS development programme and also include many commitments for future airport operations: for example, the expected conservation benefits of the aforementioned marine park and enhancement funds that support diverse research and conservation efforts.

Climate change is an ongoing issue for many airport operators. At Vancouver: “Drainage is a concern for wildlife hazards because of the heavy rains the airport receives in winter,” Bradbeer notes. “The forecasted changes in our climate are projecting more intense periods of heavy winter rain, and this will in turn increase the prevalence of stormwater pooling on the airfield, attracting water birds.”

Thus, he adds: “Consideration is being given to solutions for stormwater management in the face of these forecast changes.”

New ideas are key to meeting changes in the local environment. YVR is “always working on new and innovative solutions to manage wildlife,” Bradbeer says. “One example is our Raptor Trap & Translocation Program. The Fraser River delta is home to the highest density of wintering raptors in Canada. To manage this density, we operate a successful Raptor Trap & Translocation Program. Once captured, the birds are tagged with a unique numbered leg band and translocated to the east, away from YVR. Special wing tags on the larger hawks help us understand the movement of the birds.”

Meanwhile, in the US, nature and scale continues to change due to many environmental variables as well as manmade variables, including but not limited to land-use changes on and around airport property, changes in demand for air travel, seasonal fluctuations of migrating wildlife, seasonal/annual climate variations (such as drought or higher-than-average precipitation), the team at DEN explains.

“DEN views habitat management as part of our broader environmental strategy, and has taken a more holistic approach to both land and wildlife management,” it asserts. “We recognise the valuable ecosystem services that healthy landscapes provide and have been working with Colorado State University and the USDA to more effectively and responsibly manage our land while meeting operational and safety goals.”

At a wider aviation industry level, AAHK is amongst those airport operators who have participated in the global dialogue supporting the sustainable development of aviation and airports. On this, AAHK works closely with airports and trade associations, including the Airports Council International (ACI) World Environment Standing Committee and the ACI Asia-Pacific Regional Environment Committee.