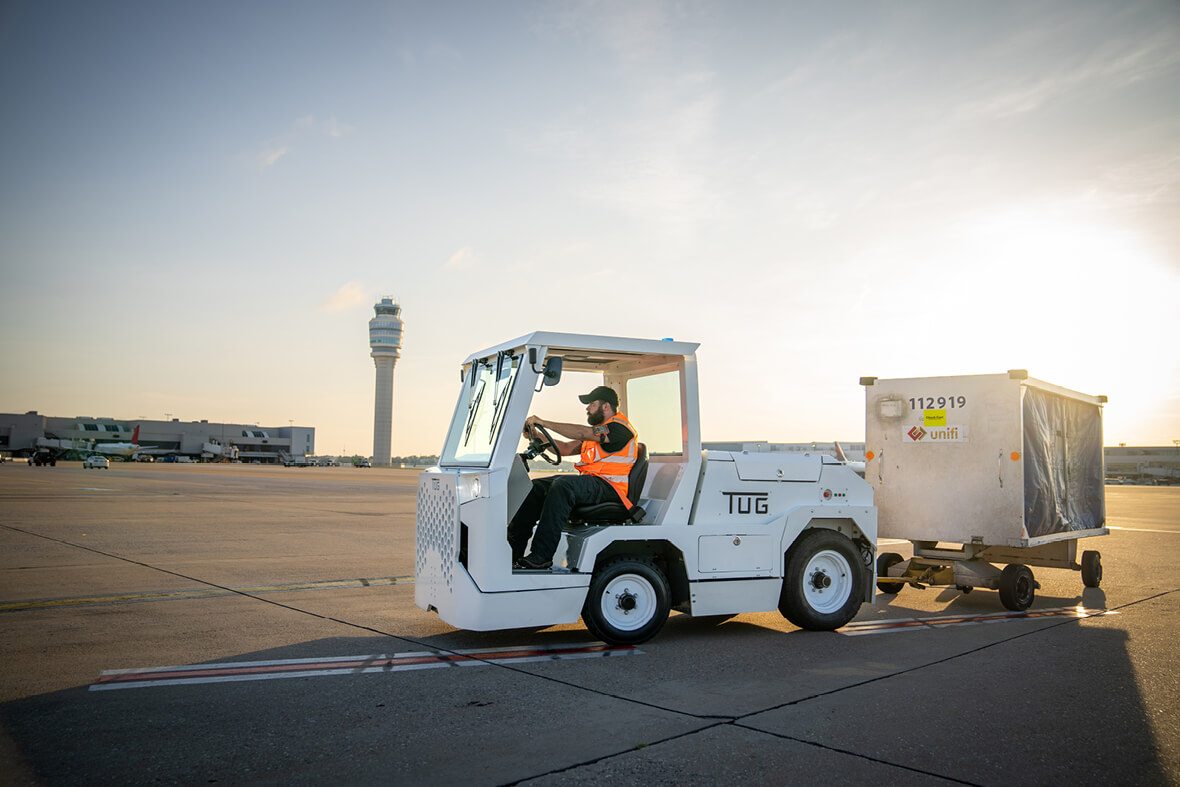 In September, Textron GSE announced the launch of its new TUG Endurance baggage tractor. The vehicle was unveiled at the GSE Expo Europe event held at Le Bourget in Paris in the middle of the month.
The TUG Endurance has a modular design that is said by the manufacturer to prioritise performance, safety, ease of service and sustainability. It is available with either a forward cab or aft cab driving position, with the driving compartment designed and built to offer comfort as well as safety, including “superior visibility”. It also comes with an electronic parking brake.
As well as gas/petrol and diesel variants, the TUG Endurance is also available in a lithium-ion battery powertrain model that incorporates General Motors (GM) and Powertrain Control Solutions (PCS) technology. This powertrain was, says Textron, “specifically designed in collaboration with Textron GSE to withstand the rigours of ground support applications”.
In this variant, the high-capacity lithium batteries together with the GM and PCS driveline offer extended operational use without need for charging. The vehicle is also capable of DC fast charging – plus, it can be opportunity-charged as operations demand.
Each variant’s drivetrains are designed to be interchangeable, so that operators can upgrade gas/petrol and diesel models to lithium battery power at any point in the future as airside electric charging infrastructure becomes more commonplace.
TUG Endurance models feature electronic steering that offer a level of high manoeuvrability, and they have a drawbar pull of up to 6,000lbs (2,722kg).
Bolt-on panels with easy access to major components, as well as Bluetooth-enabled remote diagnostics capability, make for easy serviceability. Various options on the unit include inching controls; cab-door variants; LCD display; heating, ventilation and air conditioning (HVAC); and back-up alarm. Autonomous control systems are also built in to the vehicle to position the platform for potential technological changes of the future, Textron informs.
“Built on a foundation of customer insights and future-facing technology, the new TUG Endurance baggage tractor was developed to provide a new level of efficiency to customer operations,” says Matt Chaffin, vice president and general manager at Textron GSE.
Of the lithium-ion battery-powered model specifically, he notes: “The collaboration with GM and PCS has enabled us to utilise decades of proven leadership in high-capacity lithium technology and leverage its advantages for ground support equipment.”
The TUG Endurance’s lithium-ion drivetrain adheres to automotive-based testing and standards, and constantly checks for conditions such as ground faults and disconnections. It includes a manual safety disconnect for lock-out/tag-out procedures.
Travis Hester, vice president of EV [electric vehicle] growth operations at GM, comments: “Our ongoing collaboration with PCS and Textron GSE underscores GM’s commitment to extending the performance benefits of electrification to a wide range of applications, which is helping many other industries to achieve their own emissions targets in the process.”
And Dan Boucher, president of PCS, observes: “It is exciting to see the TUG Endurance bring advanced propulsion technology to the ground support industry.
“This technology, after decades of refinement in the automotive space, was integrated with the focus of enhancing safety, efficiency and reliability on the ramp.”

Growing demand for green GSE
Chaffin tells Airside that Textron has seen increasing demand for an electric baggage tractor, and indeed for electric GSE in general, over recent times. “Given the drive towards sustainability and the associated benefits of operating electric equipment, customers are eager to learn more so they can understand the opportunity to integrate electric technology into their operations,” he reveals.
One of the advantages of Textron’s collaboration with GM and PCS, he says, is that TUG Endurance models have been built to leverage automotive charging technology. This means that an operator can charge the tractor utilising a J1772 connector up to level 2 charging or with a DC fast charger.
A level 1 charger enables the TUG Endurance to be plugged into any outlet and the DC rapid charger – which is widely used in the automotive world – can charge the TUG Endurance tractor in less than two hours. As support vehicles such as trucks, airport buses and high lift equipment transition to electric platforms, automotive charging will become commonplace in airports around the globe, Chaffin points out.
As for the possibility of expanding the GM and PCS technology into other Textron GSE in the future, he remarks: “Textron GSE is always looking for ways to enhance its products and position them for the future. The collaboration with GM and PCS enables us to explore synergies of the technology and opportunities to electrify other categories of equipment.”

Ideal time
According to Chaffin, based on the annual tractor sales cycle, the GSE Expo Europe in Paris represented an ideal time to introduce the new baggage tractor to customers. Textron hopes to go into production on the unit in the second quarter of next year.
The TUG Endurance received a lot of interest at the show, he recalls. “Its overarching value proposition includes many features that were developed based on direct feedback from customers. Attendees were excited that the TUG Endurance is a heavy-duty baggage tractor and were interested to learn more about the automotive high-capacity lithium technology.
“The GM and PCS technology has been integrated specifically for ground support applications. The electronic parking brake and autonomous-ready control systems were also of interest because TUG Endurance models have been developed with future technology advancements in mind.”
Of the potential customer base for the vehicle, he explains: “All TUG Endurance baggage tractors have been designed for the global market. With a modular design it allows customers the option of cab forward or cab aft driving positions, which is typically dictated by geographical region.
“A diverse range of drawbar pull also allows TUG Endurance models to be used at both small and large operations. TUG Endurance models are CE-certified and meet SAE and IATA requirements.”
CE stands for Conformité Européene, or European conformity. SAE International, formerly called the Society of Automotive Engineers, is a US-based, globally active professional association and standards developing organisation for engineering professionals in various industries, while IATA is the International Air Transport Association trade body that represents air carriers.

Intellimix for the Safeaero 220 de-icer
Also attracting interest on the Textron stand in Paris was confirmation that it has made its Intellimix de-icing technology available on its Safeaero 220 single-operator de-icer.
Intellimix technology optimises the de-icing process by “delivering the perfect blend of heat and fluids”, Textron says. In traditional de-icers, fluids are mixed and heated on the vehicle’s chassis and then pumped up the unit’s boom for spraying. This process requires fluids to be flushed between aircraft de-icing procedures as the ambient temperature changes, in order to ensure that the correct fluid mix is deployed.
Fluids are typically flushed when the ambient temperature drops and a higher concentration of type 1 de-icing fluid to water is required. In traditional de-icers, purging is necessary to flush fluids from the tank to the boom, to ensure the right mix is utilised based on the ambient temperature. This process can be expensive and unproductive, and releases excess chemicals into the environment, Chaffin notes.
“Intellimix technology delivers efficiency to the de-icing process because fluids are heated in the chassis, but not blended until they reach the nozzle,” he explains. “In traditional de-icers, mixing occurs at the chassis, earlier in the process, and if temperatures change, fluids cannot be used and must be purged which adds more time and cost to the de-icing process.”
Intellimix eliminates the need to flush fluids, lowering operating costs, increasing productivity, enhancing safety and reducing environmental impacts, Textron declares.
The technology was developed because of specific customer feedback asking for the benefits it brings, Chaffin confirms, and the general need for solutions that drive efficiency to their operation.
It was designed specifically for the Safeaero 220, which also offers its users the efficiencies of one-person driving, manoeuvring and de-icing all from the cab. Its features include an extensive operational radius and compact size, stainless steel tanks, four-mode nozzle control system, automotive steering and a collision warning system.
“Intellimix technology enables us to increase our customers’ operating efficiencies while strengthening our commitment to sustainability,” comments Chaffin. “The Safeaero 220, equipped with Intellimix, is designed to exceed customer expectations and offer superior performance when time matters most.”
Intellimix technology garnered a lot of interest from attendees who visited the Paris GSE Europe Expo, he continues. “Customers are eager to learn more about products that will enable them to operate more efficiently and sustainably.”
Development of Intellimix began just prior to the Covid pandemic, which delayed the launch timeline, but the technology will be in production for the 2023 de-icing season. It will be a feature on all future Safeaero 220 models, although – due to the design of the technology and how it is engineered into the de-icer – Intellimix technology will not be offered as an after-market solution for existing vehicles.
As well as baggage tractors and de-icers, Textron GSE offers a diverse range of conventional and towbarless pushbacks, belt loaders, ground power units (GPUs), air start units (ASUs) and air conditioning units (ACUs). Textron GSE operates as part of the Textron Specialized Vehicles business.