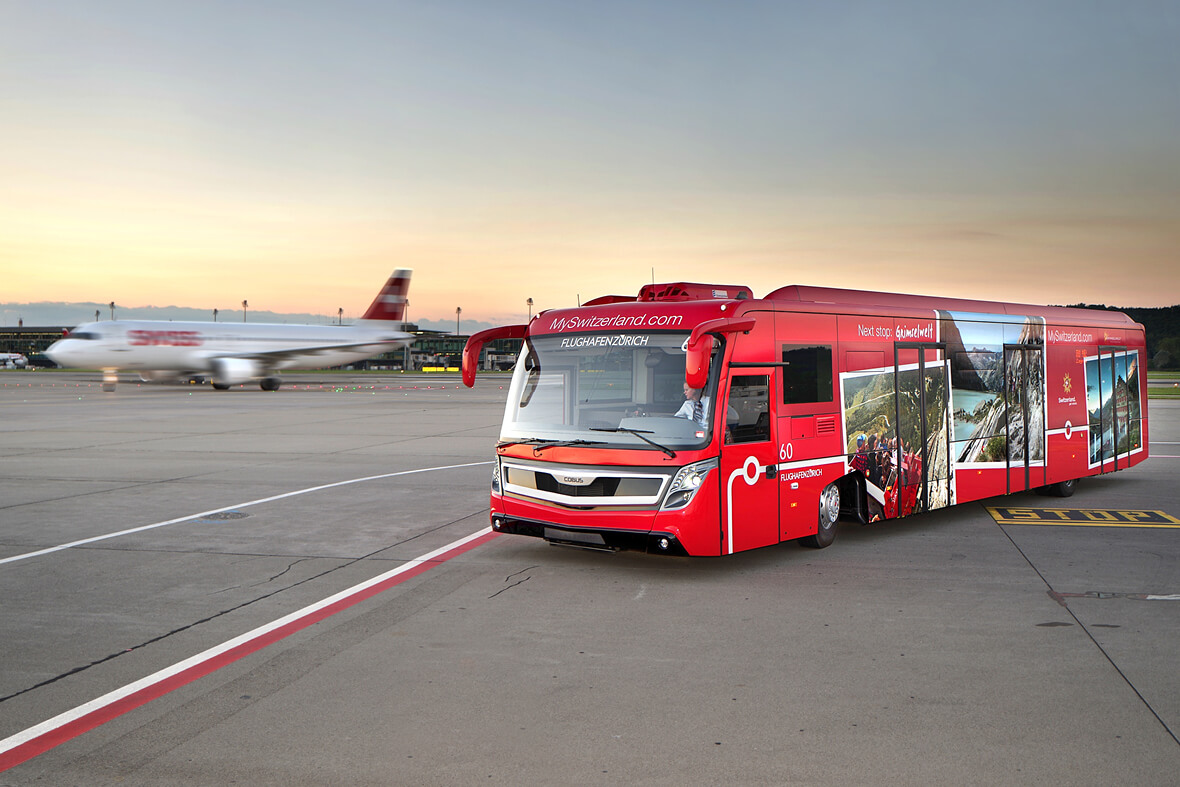 Some of the previously big bus manufacturers who delivered specialist products for airport apron operations have chosen to focus their attention elsewhere, while other suppliers are moving into this sector. Meanwhile, the preference for electric buses in airside operations is becoming more pronounced

While some of the big players of a few years ago in terms of apron bus manufacture are no longer prioritising this market (Germany’s MAN and its subsidiary Neoplan for example, along with Van Hool of Belgium), Chinese bus manufacturers are certainly now seeing it as a potentially lucrative one.
Meanwhile, the nature of the buses being supplied to – and used within – this sector is also changing quite noticeably. Most notable has been the trend for electric-powered apron buses, part of the wider movement towards greener airport infrastructure and equipment. As part of that shift, specialists in electric vehicles and electric drive are beginning to make inroads into the airport bus business.

Electric drive
Chinese bus manufacturers establishing themselves in airside operations place great emphasis on electric drive. Slovenia-based TAM-Europe has significant Chinese investment and, as well as its focus on the airport market with its VIVAIR buses, has moved into electric bus provision with its VERO vehicle. And Zhengzhou-based Yutong Bus Co, thought to be the world’s biggest bus manufacturer in terms of global sales and a major developer of electric and hybrid-powered buses, has apron buses in operation – an electric version that went into operation at Seville Airport in 2019 was Spain’s first fully electric apron bus operation, for instance.
Meanwhile, Shenzhen-headquartered BYD has 26 years of experience in battery research and development, production and application, and claims to be not only the first but also the only automobile manufacturer to produce its own power train system, battery, motors and motor control system.
BYD has sold over 65,000 eBuses around the world and, as it part of its emphasis on zero emissions and ‘pure-electric transportation’, it points to the fact that it is the only coach and bus supplier to offer ‘total transport solutions’: not only providing electric vehicles but also complementary technologies such as charging, software, energy storage and even solar energy generation.
BYD’s eBuses are powered by its own iron-phosphate battery technology which offers what it describes as “unique levels of safety and reliability”, especially important when moving passengers in such a unique environment as airports. BYD batteries also offer long driving ranges on a single charge. Electric buses are ideal for airports because they can be easily charged there, BYD opines, allowing continuous operation and avoiding the risk of compromosing tight flight schedules, especially at hub and other busy airports.
BYD Europe was founded in Rotterdam, in the Netherlands, in 1998 as BYD’s first overseas subsidiary (although BYD Netherlands subsequently moved to nearby Schiedam in 2015). Since its founding, BYD Europe has placed over 2,000 eBuses all over Europe. Today, its eBuses operate at European air gateways including include Amsterdam Airport Schiphol in the Netherlands, where 35 BYD eBuses have been acquired; Brussels Airport in Belgium; and Glasgow Airport in Scotland.
Outside Europe, BYD eBuses are in service at airports as far afield as Sydney Airport in Australia; Hartsfield-Jackson in Atlanta and Los Angeles International Airport in the US; and Shenzhen Airport in the group’s home market of China. More recently, the group partnered with Japanese carrier All Nippon Airways (ANA) to undertake trials of an autonomous driving bus at Tokyo’s Haneda Airport. Airports large and small are targeted as potential markets, the company affirms.
BYD Europe’s managing director, Isbrand Ho, confirms that the Covid-19 pandemic has affected the company no less than others. Nevertheless, its commitment to delivering zero-emission transport has remained undimmed, Ho says, and its customers can continue to rely on the “full backing from BYD’s customer support and after-sales portfolio of services”.
Its parts distribution network has remained operational and, additionally, “We have offered special service and advice to operators about battery maintenance,” Ho informs. This has enabled customers to preserve their batteries in good condition even during times when buses are not in operation every day due to lockdown restrictions and passenger travel limitations.
Given the emphasis on ‘going green’ that exists in the aviation industry at the moment, many believe that demand for eBuses is only likely to increase yet further once the effects of the pandemic are behind us, and certainly Ho is of the opinion that the future of the transport industry lies in the development of environmentally friendly ‘new energy’ vehicles – specifically, battery-powered, purely electric vehicles.
“The simplicity of electricity, and its storage make e-mobility a compelling proposition across multiple industry sectors,” he says. “Delivery of electricity does not carry any burdensome complications, nor any expensive requirements to ship, pressurise, store or handle.
“Using electrical energy and battery electric vehicles is really the best long-term option for public transport operators. Battery-powered electric vehicle technology is delivering tangible, sustainable benefits today. Therefore, airports as well as other operators will see the benefits of electric buses in their operations, and thus the demand for these vehicles is undoubtedly expected to rise,” Ho asserts.

German engineering
Many other automobile suppliers are now either devoting more of their energies to electric drive or, indeed, are fully focused on just that. Augsburg, Germany-headquartered Quantron is a specialist in ‘e-mobility’, offering electric trucks and transporters of various kinds, including buses.
For the airport market, it provides a number of vehicle models that range from its small 3.5-tonne N1 chassis and van, which can still be driven electrified with the European B class driving licence, up to 4.25-tonne versions and then in the middle range segment up to 12- or 16-tonne total weight vehicles for catering applications, and aircraft supply/service or surface sweepers of up to 28 tonnes’ total weight. And, in terms of larger passenger carriers, Quantron offers buses for airside application of up to 50 tonnes (as well as various tractor units up to the same weight that have airport-related applications).
For airport-based operations, reliability, ease of assembly and ease of use are of fundamental importance, observes Quantron’s head of product management, Reiner Dellori. According to the different needs of different users, “There are important prerequisites for bus body installation such as power take-off, different wheelbases and cab variants. In addition, the vehicle must work particularly efficiently in order to use the stored energy [of the vehicle’s battery] as well as possible for tasks at the airport. Quantron has special equipment and options available for this.”
Like BYD, Quantron has seen an inevitable decline in activity in the market over the past 18 months or so. At the beginning of the pandemic and the consequent downturn in flight operations, the willingness to invest in new systems and equipment across the sector sank to a low point, Dellori recalls. However, with the improvement of the current situation in air travel and increasing demand for zero-emission vehicles, the willingness to invest in electric vehicles has since improved significantly, he declares more positively.
While Dellori expects demand for electric vehicles in general to increase in the future, smaller and more flexible buses are also again in demand today for airside use, he observes. Moreover, there is today a need to convert existing vehicles to electric drive and thereby give these vehicles a “second life on the airport apron”, he advises, adding that Quantron is “the right partner for this”.
Indeed, Dellori says, “In the airport sector, specialists are required for the electrification of vehicle fleets in order to create a sensible needs analysis and configure the right product. Quantron is set up for this.”
Other bus suppliers – including elsewhere in Germany – have also moved into electric drive, appealing to their customers’ sense of environmental responsibility. MAN Truck & Bus, one of the world’s biggest bus manufacturers (and of which German bus and coach manufacturer Neoplan is a subsidiary) makes vehicles built for fully electric drive.
Although MAN doesn’t now offer bus designs specifically for apron use, its vehicles can of course be used both for terminal shuttle operations and for passenger transport on and off the apron, and Neoplan buses have long been a common sight at many airports around the world.

Dedication to the airport market
While a number of the bus manufacturers now supplying into the aviation market are relative newcomers to the airport sector, and many of them focus most of their efforts on other markets like intra-city or inter-city bus and coach travel, Germany’s COBUS is dedicated to ‘airport mobility’.
Prioritising the airport market has given it a strong understanding of airport passengers’ needs as well as airport operators’ requirements, and helped it become a leading player in this business – although this same specialisation did, of course, leave it somewhat vulnerable when the aviation market collapsed following the outbreak of the Covid-19 pandemic.
Laila Engler, COBUS’s head of marketing and sales manager, explains that the company has taken the opportunity during the industry downturn to develop elements of its portfolio to further improve their attractiveness to operators. For example, it has developed a new air conditioning (AC) system for its e.COBUS 3000 for hot environments such as Texas in the US, where examples of this model now operate.
The lithium titanate battery-powered e.COBUS was developed from its diesel predecessor and launched some five years ago, and is already in use at airports across Europe and Asia as well as in North America.
All COBUS bus models now have a battery-powered variant, and Engler is in no doubt that these environmentally friendly vehicles will only grow in popularity across most geographical markets, a process driven in many countries at least in part by governmental pressure but also by the fact that airport operators want to be seen to be ‘green’, and large, passenger-facing apron buses are a good way for airport authorities to demonstrate their green credentials.
As well as its factory-built electric buses, COBUS also offers retrofits to battery power of its diesel models; the bus’s diesel engine is removed and replaced with an electric drive train while the batteries are fitted to the roof of the vehicle. The company can also provide various other improvements as part of a customised package, which might include fitting or updating data loggers or airport flight information systems, for example.
COBUS’s biggest markets remain in Europe and North America, although demand for apron buses in the latter continent is somewhat hampered by US passengers’ well-known dislike for remote stand bussing operations (travellers there generally expect to use air bridges from terminal gates). COBUS buses are also in use in locations as far afield as Asia – most noticeably in South-east Asia, because the Chinese market is now dominated by domestic manufacturers – and Africa.
Engler is seeing some signs of recovery in the aviation industry that can only help COBUS’s business – but some markets are looking like they will bounce back more quickly than others. She envisages swifter upturns in Asia and North America than in Europe, for example, where restrictions on passenger travel continue and are still holding the industry back.
Meanwhile, COBUS continues to improve the attractiveness of its products by offering customers flexible methods of payment, something that is perhaps particularly important right now. For instance, it offers various financing options through a collaboration with different financial solutions providers that serve equipment and technology manufacturers and distributors. Options include financial leases, operating leases and hire purchase deals.