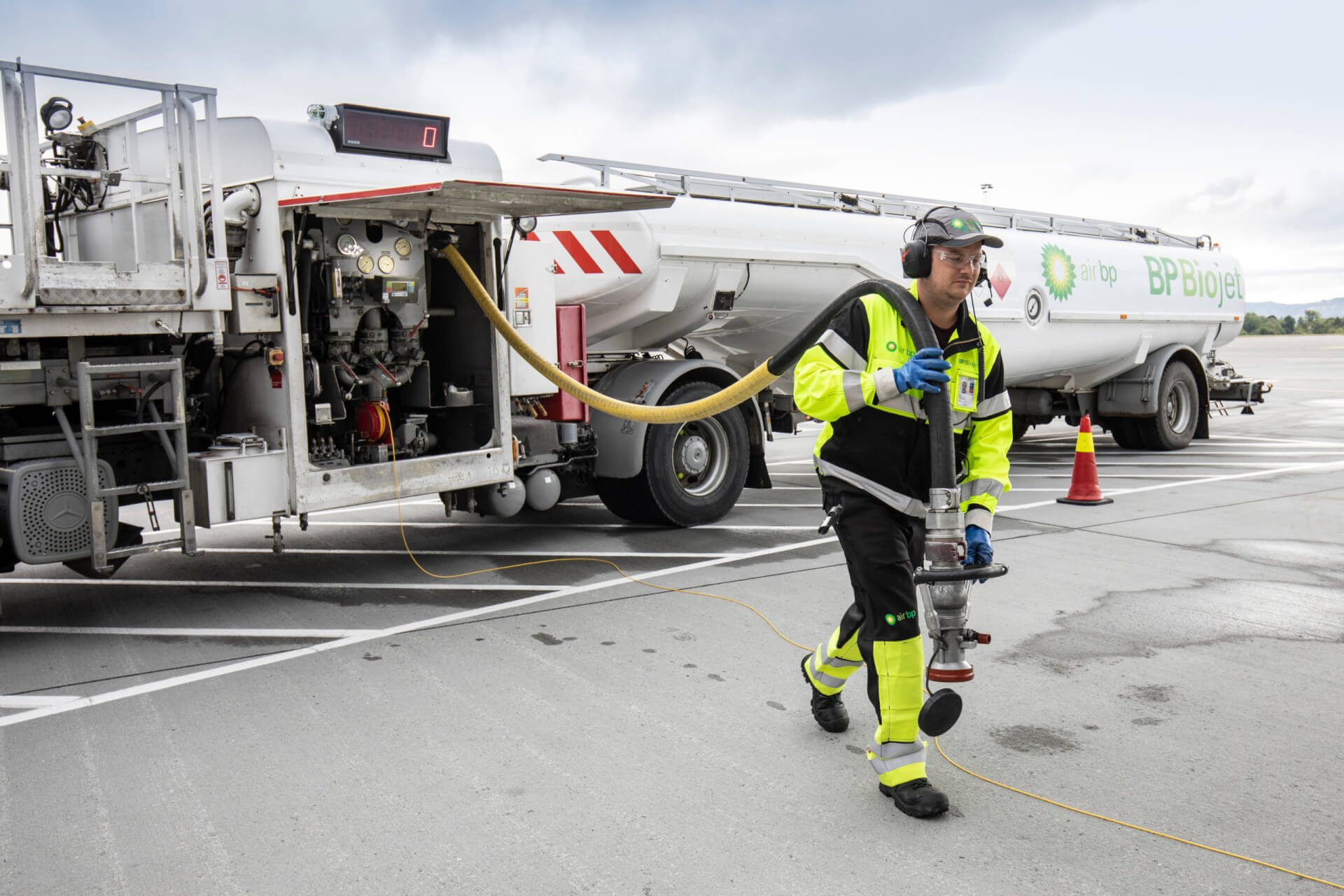 As research continues into green alternatives to traditional jet fuel, how is the refuelling sector changing?

From investing in more fuel-efficient aircraft to favouring electric GSE, the air transport industry is working on a number of fronts to reduce the environmental impact of flying.

That change is happening right at the source that powers it, says Mark Vaughan, head of department, fuel management at South African Airways.

“Many of the companies that previously largely concentrated on fossil fuel and chemical production are busy remodelling their business to include renewable energy and technology, and thus calling themselves energy providers rather than (for instance) an oil company.

“One of their focus areas would be on the progression of alternative propulsion for aircraft and what will be needed to fuel these aircraft of the future.”

“To date we’ve supplied sustainable aviation fuel (SAF) to 16 locations in six countries,” she points out. “In 2018, we agreed a collaboration with Nesté, one of the world’s leading renewable products producers, to develop SAF supply chains, and we’ve also invested US$30 million in waste-to-fuels company Fulcrum BioEnergy.”

A spokesperson at German flag-carrier Lufthansa notes that SAF saves up to 80% of CO2 emissions compared to conventional kerosene. It is also about three times as expensive as traditional fuel, and far from as readily available: only 0.01% of the kerosene required worldwide is currently produced as SAF.
Lores expects up to 50,000 tonnes of SAF to be produced globally in 2020. “This is a sign of good progress,” she says, “but it comes from only two commercial-scale producers today. In the next few years, we should see additional suppliers come online,” as the drive for better environmental performance continues.

Right now in California, World Energy produces SAF from used oils and fats from agricultural production at its refinery in Paramount. Working with Shell, the Lufthansa Group has secured 1 million gallons (3.785 million litres) of that fuel, which is now used on its flights from San Francisco to Frankfurt, Munich and Zurich.

The airline also obtains SAF from Finnish producer Nesté Oil, which it uses at Frankfurt Airport.

Lores says SAF is safe, compliant and thoroughly tested. Its increasing use translates into ongoing demand for refuelling equipment and technology of the same type that is used to deliver traditional jet fuel.
She explains: “Any aircraft certified for using the current specification of jet fuel is able to use SAF. It can be blended at up to 50% with traditional jet fuel, all quality tests are completed as per a regular jet fuel, and the blend is certified as Jet A or Jet A-1.

“Once blended, SAF has the same characteristics as traditional jet fuel. It can be handled in exactly the same way as a regular jet fuel, so no changes are required in the fuelling infrastructure or for aircraft.”
At Frankfurt and San Francisco, SAF is delivered via these airports’ hydrant systems.

“This means that the SAF is added to conventional kerosene and enters the aircraft tanks as an admixture,” the Lufthansa spokesperson outlines. “As SAF is an admixture in the airport system, it gets into all aircraft that refuel at Frankfurt and San Francisco.”

Research and development
Lufthansa is looking beyond SAF. Its long-term goal is to introduce synthetic fuels derived from renewable sources (Power-to-Liquid, or PtL), which are likely to make carbon-neutral flying possible in the future.

Aircraft manufacturer Airbus is also studying how PtL could act as an almost zero-emissions substitute for kerosene, the company confirms. Plus, it is a member of the Hydrogen Council, which aims to foster the role of hydrogen technologies in the global energy transition.

In November last year, Airbus and low-cost carrier easyJet signed an MoU relating to a joint research project on hybrid and electric aircraft.

easyJet CEO Johan Lundgren notes that the project “will aim to identify the detailed technical challenges and requirements for hybrid and electric planes when deployed for short-haul flying around Europe, so that we can help shape the technology and airline networks of the future”.

The development and standardisation of all the necessary infrastructure to support electric flights is a key focus area of initiatives such as the Nordic Network for Electric Aviation (NEA), launched in September 2019.

While the electrification of aircraft is “an exciting space”, Lores points out that it is still in the very early stages of development.

“The world is a few decades off seeing large-scale commercial electric passenger jets taking to the sky,” she says.

“We believe that the use of sustainable alternative fuels within conventional aircraft will likely make the biggest impact on carbon emissions and [we] are actively working to increase its supply.”

Thus, for instance, as well as participating in the NEA project, SAS Scandinavian Airlines is continuing to work on biofuel initiatives. It entered into a partnership with Preem in 2018 to ensure large-scale production of SAF and is also working with Norwegian airport operator Avinor to accelerate commercialisation and production of SAF in Norway.

All of this means that refuelling equipment suppliers are unlikely to experience a decline in demand for some time yet; they will continue to play a vital role in keeping aircraft flying, as those aircraft will rely on some form of liquid fuel in the coming decades.

Data driven
While the basics of refuelling are not changing, some of the related technology is evolving.

Vaughan says manufacturers of aircraft fuelling equipment are working closely with airlines, fuel suppliers, into-plane agents, aircraft manufacturers, standard-generating bodies and regulators to produce equipment that is safe and fit for purpose. Plus: “Manufacturers are incorporating electronic sensing to improve on efficiency and enhance safety of the refuelling process. There is also work being done on fully electrified refuelling vehicles with some prototypes presently being tested.”

An example of an electric refueller already in service is Fluid Transfer International’s FT RAZER (Rechargeable Aircraft Zero Emission Refuelling) dispenser.
Another is the electric pump jet refuelling vehicle developed by Shell Aviation and Esterer.
Air BP, meanwhile, is responding to feedback on the importance of digitalising airport fuelling operations to reduce risk and improve accuracy and efficiency, Lores says.

AA works using a cloud-based platform, which consolidates all the data related to airport fuelling operations via an app on a handheld device in the fuelling vehicles.

So far, the AA ‘safe2go’ app is live in 16 countries across four continents. It records fuel volume readings and provides fuel grade checks to add an additional barrier against misfuelling. It then electronically captures customer details; these are confirmed with an electronic signature from the pilot or airline.

“We continue to roll out this AA technology, with plans for it to be in use at around 350 of our network locations in 25 countries by the end of 2020,” Lores confirms. In addition to its digital Airfield Automation technology, Air BP continues to offer the ability to order fuel online via the Marketplace app.

Lores believes that the ability to capture data and create insight for fuel customers (which include airports, commercial airlines, the military and general and business aviation operators) is likely to play a significant role in helping drive better aviation fuel management.

“As technology advances, we see digitalisation continuing to drive customer convenience both at the airport and prior to arrival at the airport.” she says.

“To this end, we are working on a variety of options to complement our Airfield Automation technology and extend our offer through real-time data services. We will continue to work with third-party digital providers who have existing solutions fit for today, but can also provide flexibility for future generations of technology,” she adds.

The Covid-19 pandemic has, of course, resulted in a dramatic reduction in the number of aircraft flying – with a consequent reduction in demand for refuelling equipment and services.

Vaughan highlights guidelines from bodies such as the Joint Inspection Group (JIG – the organisation for the development of aviation fuel supply standards) that cover best practice for the shutdown of refuelling equipment. One important point is to rotate units on a regular basis at stations that are experiencing limited uplift.

“You need to keep systems wet,” Vaughan explains. “If filters dry out, they have to be replaced, and if hoses dry out they can become brittle and leak. It’s important to mothball equipment properly so that it can be re-commissioned successfully and safely at the right time.”

It is also necessary to carry out daily sumping of fuel to prevent microbiological growth in fuel tanks. Plus: “Any fuel that is left dormant in a tank for a long period must be tested before it can be used. It is best to rotate fuel back into the fuel farm rather than leave it in the refuelling vehicles’ tanks,” Vaughan adds.

OEMs provide checklists for the correct storage and return to service of the equipment they manufacture and users should consult these, as well as complying with local legislation pertaining to safety inspections, for instance.

It is not just commercial airlines that are switching to SAF.

Airbus has been offering delivery flights powered with SAF since 2016 from its centres in Toulouse, Mobile and Hamburg, and as of March 2020 it had plans to extend this option to its facility in Tianjin.

In December 2019, Airbus began the progressive introduction of SAF to power its industrial transportation needs via the Beluga fleet, too.

At the same time, though, suppliers of traditional fuel have been seeing demand for their products rise. Gazpromneft-Aero added 13 airports to its refuelling network last year, taking the total to 282 airports in 67 countries. This growth was a result of a 26% year-on-year increase in the total volume of overseas refuelling, to more than 310,000 tons.

The Covid-19 pandemic has had a massive impact on demand for jet fuel. Gazprom Neft CEO Alexander Dyukov notes: “When entire countries are going into quarantine, there’s going to be a major drop in demand for hydrocarbons, and for the products refined from these.”

In light of this: “Obviously, the company will have to be more conservative, reassessing all plans, and rescheduling specific projects. But the situation does not affect Gazprom Neft’s strategic objectives to 2030.”